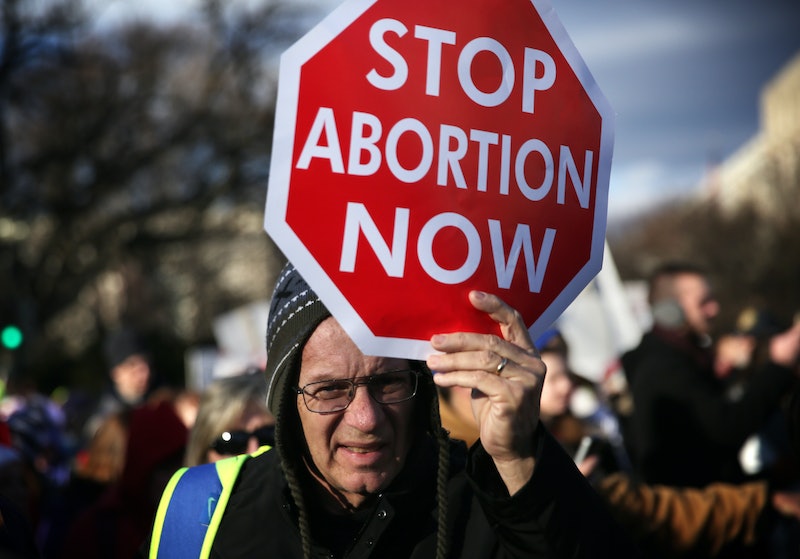 In news that will probably not come as a shock to those of us who see abortion access as part of women's basic human right to bodily autonomy and reproductive rights, it turns out that people who oppose abortion are more likely to be sexist. I know, right? Who ever could have seen that coming? It's almost like trying to legislate what health care procedures women are and are not allowed to have goes hand in hand with not thinking women should have the right to make their own decisions!

In a new study published in the journal Aflia: Journal of Women and Social Work, PhD candidate Stephanie Begun examined the link between anti-abortion views and sexist attitudes. Begun used data from a previous survey of over 600 undergraduates from six different universities and looked for both anti-abortion attitudes and either benevolent or hostile sexism. Benevolent sexism involves things such as praising women for stereotypically female roles, like being caregivers, whereas hostile sexism involves more blatantly anti-women views. Neither is compatible with the idea that women should be allowed to live their lives free of gendered expectations and gender stereotypes.

So what does this mean for the abortion debate?

Well, for a lot of us, it helps confirm something that has seemed obvious for a long time: Opposition to abortion is at least partly based in anti-woman attitudes. This is especially evident when looking at the historical context for abortion. Though we typically think of anti-choice attitudes as a conservative, old-timey approach, the truth is that widespread opposition to abortion is a relatively new phenomenon.

Although abortion was first recorded in 1550 BCE in Egypt, the practice didn't raise many objections throughout most of human history. In fact, possibly the first ever law listing early-term abortion as more than a misdemeanor was the Malicious Stabbing and Shooting Act of 1803 in England. Anti-abortion sentiment didn't really get going until the Victorian era. Modern pro-life movements in the 20th century arose around the time that scientific advancements in birth control and abortion gave women greater control over their reproductive destinies, thus provoking anxiety about changing social norms.

Put another way, the most recent wave of backlash against abortion was partly fueled by a belief that women lacking control over their own reproduction was a social good.

Today, of course, there are any number of examples as to why large segments of the pro-life movement fail to support women, or care about their welfare; perhaps the most damning, however, is the fact that the same people who oppose legal abortion often tend to be opposed to easy access to birth control, despite the fact that the making birth control available and accessible has been shown to be a highly effective way to reduce the number of abortions. And then you have things like pregnancy crisis centers, where people use fear, intimidation, and lies to coerce women into carrying an unwanted pregnancy to term.

I'm sure there are any number of people who belong to the pro-life movement who are not sexist, as incredible as that might seem to those of us who are mostly familiar with the image the movement portrays to the public. However, that does not change the fact that the movement as a whole has, as its explicitly stated goal, a determination to deprive women of their right to make choices about their own bodies. And that is undeniably sexist. I mean, how many laws have been passed lately to control men's medical decisions? How many Supreme Court cases?

Given all of that, it's not surprising that people who are sexist would also be drawn to the pro-life movement. This is not to say that everyone who opposes abortion does not believe in women's political, social, and economic equality — just that a higher percentage of them do than you might find in the population as a whole.

More like this
How To Fight For Reproductive Rights, Based On How Much Time You Have
By Courtney Young
34 Quotes That'll Inspire You On Juneteenth & Beyond
By Syeda Khaula Saad and Siena Gagliano
16 Novels That Paint A Realistic Portrait Of Abortion
By K.W. Colyard
17 Powerful Photos From March For Our Lives Protests Across The U.S.
By Michelle Toglia
Get Even More From Bustle — Sign Up For The Newsletter