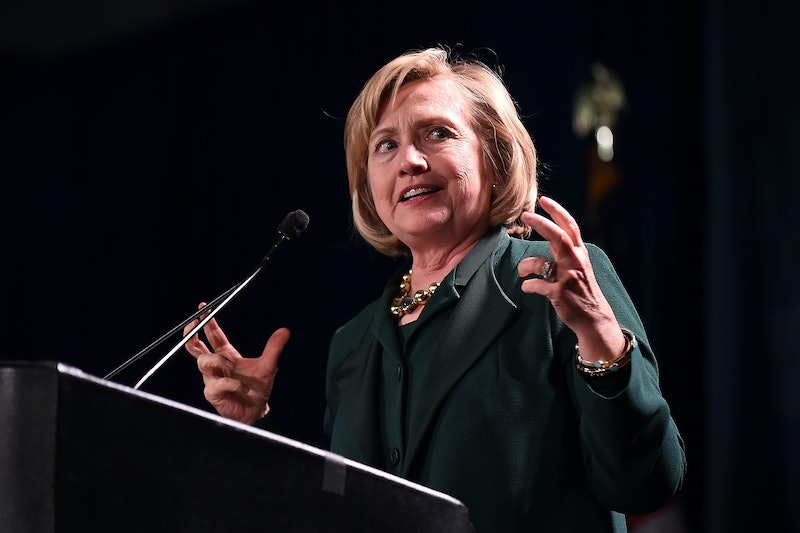 Former Secretary of State and 2016 presidential hopeful Hillary Clinton gets a lot of criticism day in and day out. Whether it's about Benghazi, her husband and former president Bill Clinton, or the fact that she's a woman seeking a leadership role, Clinton has brilliantly answered some pretty bad questions critiquing her credibility and qualifications. She doesn't even try to insult the reporters who often try to stoop down and hit her where it hurts. Rather, she often answers the questions with practicality and poise.

The topics over which reporters and critics can berate Clinton are numerous. There's the 1998 Monica Lewinsky scandal, where a former intern for Bill alleged that she and Bill had had an affair, to the most recent email scandal, where critics are alleging that Clinton broke the law by using one of her private email accounts while on the job as Secretary of State. When the State Department demanded she hand over the emails, she released the work-related ones, but said other, private emails had been deleted. Some say those deleted emails could have contained information about the Benghazi tragedy, when four Americans were killed during an attack by Islamic militants on the American diplomatic compound in Benghazi, Libya.

Whatever the topic and however rude or persistent the interviewer, Clinton has kept her cool. Here are some of her most impressive moments.

When ABC Reporter Diane Sawyer Pushed Her About Benghazi

According to an unclassified Senate Intelligence Committee Report, the Senate Department failed to heed warnings and requests for increased security, which left the U.S. mission in Benghazi and its CIA annex vulnerable in September 2012, according to MSNBC. Though officials have said that Clinton's emails revealed that she wasn't personally involved with decisions that resulted in weak security, according to Newsmax, some still push her about the issue.

Clinton has defended her actions prior to Benghazi by saying that she commissioned a report from the State Department's Accountability Review Board to help her understand what went wrong and what could've been done differently on her part, according to The Washington Post. But ABC News anchor Diane Sawyer threw this back at her in a televised interview. She called the security breach a "systemic failure" that Clinton played a part in and should've done more, directly, to prevent. Clinton responded in a calm and relaxed manner:

I’m not equipped to sit and look at blueprints to determine where the blast walls need to be, where the reinforcements need to be (on the compound). That’s why we hire people who have that expertise.

In 1992, When A Reporter Pushed About Another Alleged Affair Bill Had

Just prior to his run for president in 1992, Bill went on CBS to discuss allegations from Gennifer Flowers, an Arkansas state employee and part-time cabaret singer, who said two had engaged in a 12-year affair, according to the Post. Though the battle was Bill's, Clinton went on TV with him and sat through what was a grueling grilling session.

The questions were straightforward and mostly pointed at Bill, until reporter Steve Kroft and alleged that the couple had set up an "arrangement" where Bill was allowed to cheat:

I think most Americans would agree that it's very admirable that you've stayed together — that you've worked your problems out and that you've seemed to reach some sort of understanding and arrangement.

Clinton did not take this lying down, though. She said she wasn't Tammy Wynette, referring to a popular country music singer at the time who went through multiple divorces and sang about the troubles of relationships. She had a song called "Stand By Your Man." Clinton responded:

You know, I'm not sitting here — some little woman standing by my man like Tammy Wynette. I'm sitting here because I love him, and I respect him, and I honor what he's been through and what we've been through together. And you know, if that's not enough for people, then heck, don't vote for him.

When A Moderator Of An Interview Asked Her A Sexist Question

In 2010, Clinton flew to Bishkek, Kyrgyzstan for an interview in front of students and young professionals, according to New York magazine. The moderator of the interview asked her a number of questions about about Kyrgyzstani issues, but then, totally out of the blue, he turned to something a bit more "fun" and slightly sexist:

The moderator asked "OK, which designers do you prefer?"

And the moderator said, "Yes."

Then, Clinton dropped the truth bomb: "Would you ever ask a man that question?" BAM. The audience laughed and applauded.

The moderator admitted defeat: "Probably not. Probably not," he said, according to New York magazine.

When A Republican Wasn't Ready For Her Answer About Abortion

During a congressional hearing on reproductive rights and family planning in 2009, New Jersey Rep. Christopher Smith asked Clinton a pointed question about reproductive rights. According to a video posted by Upworthy, he said the question was meant for "transparency" and because lawmakers "always have definition pages when we write legislation" — as if Clinton didn't already know this — so he asked something that maybe wasn't very well thought out:

Clinton's face was very serious when she answered his question. She started out by telling him she respected his opinion, and then launched into a few heartfelt stories. She said she strongly disagreed with him because she had been to Brazil, where women were fighting for their lives from botched abortions, and she had also been to Asian countries "where the denial of family planning consigns women to lives of oppression and hardship":

(The U.S.) happen(s) to think that family planning is an important part of women's health, and reproductive health includes access to abortion that I believe should be safe, legal, and rare. I spent a lot of my time trying to bring down the rate of abortions, and it has been my experience that good family planning and good medical care brings down the rate of abortion. Keeping women and men in ignorance and denied the access to services actually increases the rate of abortion. During my time as First Lady, I helped to create the campaign against teenage pregnancy, and while we were working to provide good access to contraception and decision-making (for young women) to protect themselves and say "No," the rate of teen pregnancy went down. I'm sad to report that after an administration that undid so much of the good work, the rate of teenage pregnancy is going up. So, we disagree, and we are now an administration that will protect the rights of women — including their rights to reproductive healthcare.