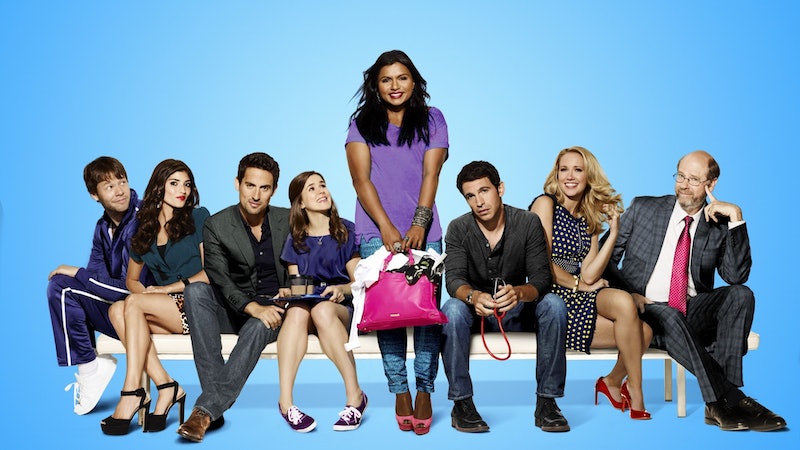 The Mindy Project has really brought us to some low lows and some high highs lately. The world was collectively devastated when The Mindy Project was cancelled by FOX after three seasons, although there were rumors on the horizon that Hulu was interested in giving the show a new life. Those rumors turned into our new reality as, on Friday, it was announced that Hulu has picked up The Mindy Project for a 26 episode-long fourth season. The show is saved! Or... is it? After all, the move from network television to a digital platform is a big one — and Hulu is no Netflix. While Netflix has found legitimate success as a "channel" with such insane hits like Orange Is The New Black and House of Cards, Hulu and Amazon Prime kind of exist in Netflix's shadow.

Hulu is the place you go when you want to rewatch some favorite shows that aren't on Netflix, not the place that you go for fresh programming. And yet, Hulu has taken large steps to change that in the last couple of years. While their original programming hasn't quite popped — Deadbeat, The Hotwives of Orlando, and Battleground aren't exactly mainstream show titles that everyone would recognize, especially when compared to the likes of OITNB — their acquisition of The Mindy Project is a huge move for them. The Mindy Project is a beloved show with a large and dedicated fan base that would follow Mindy Kaling everywhere. If everywhere is Hulu, then I have no doubt that the number of subscribers the website has is about to go way, way up.

But, while the move might be a victory for Hulu, is it a victory for The Mindy Project? The last high-profile show to make the jump from network to digital was Community, the constantly struggling NBC show that was picked up by Yahoo! Screen for the sixth season (and a movie!) that fans have always wanted. However, Community had long suffered from the fact that its fan base has not been very large throughout its run... and that that same small fan base is split between those who would watch the show forever, those who think the show stopped being good after Season 3, those who think the show stopped being good after Season 2, and the smallest set who miss the way the show was way back in Season 1. As a result, Community is doing about as well on Yahoo! Screen as it did on NBC: okay, but nothing to write home about.

Then again, The Mindy Project is not Community. It wasn't cancelled when some fans were wondering if it was worth continuing. It hasn't suffered from fans arguing over which season was the best season, and which season deserves to be erased from recent memory. How about comparing it to a show that made the jump from network to digital that most people agree was cancelled before it got a chance to blossom? That's right, I'm talking about Arrested Development. It was the best show that no one was watching, beloved by critics and barely watched by audiences. Arrested Development came back to Netflix for a highly anticipated fourth season that was watched by enough people for Netflix to greenlight Arrested Development Season 5.

Once more, The Mindy Project is not Community or Arrested Development. The latter show was cancelled in 2006, and didn't return for a Season 4 until 2013 — plenty of time for people to get nostalgic and demand the show to come back. The Mindy Project's road to cancellation and renewal more closely mirrors that of The Legend of Korra, a Nickelodeon sequel series to Avatar: The Last Airbender, which was cancelled by Nickelodeon... who then aired the rest of Book 3 and all of Book 4 online via various websites (Hulu included) instead. Technically, Korra wasn't actually cancelled so much as it was pulled from the air, but its journey mirrors The Mindy Project's more closely than Community or Arrested Development do. Both shows were both unexpected cancellations, both shows started on TV before moving online, and both shows have a fan base that is large and die hard.

The move for Legend of Korra turned out to be perhaps the best thing that Nickelodeon could have done. For those who haven't heard, Korra became legendary for ending the series with same-sex couple Korra and Asami Sato finally getting together after what was basically an entire season of unresolved tension (and two seasons of fighting over the same guy). That kind of thing probably wouldn't have flown on a children's network like Nickelodeon, not with today's TV standards the way that they are, but moving online allowed for Korra to do something revolutionary — even if it was so subtly done that the creators later had to clarify the ending was indeed meant to show the two women in a romantic relationship.

Ultimately, I think this move to Hulu will be good for The Mindy Project, because the show already pushes boundaries — crossing even some lines people have been shocked were able to air on network television. The fans are still incredibly loyal, if the jubilation over the Hulu deal is any indication, and there can be no doubt that they're willing to tune in to the new format if it means getting to see how some of the many unresolved plot threads left dangling after the Season 3 finale play out. Acquiring The Mindy Project is a huge step for Hulu, but it's a huge step for the show as well. This is one mutually beneficial relationship that I can't wait to see.

More like this
What’s New On Netflix: Lana Condor’s Ghostly Comedy & A Sexy Reality Series
By Arya Roshanian
Here’s Everything Coming To & Leaving Netflix In July
By Grace Wehniainen
Howard Stern's Net Worth: Is He The Richest Man In Radio?
By Hugh McIntyre
18 Unanswered Questions From 'The Hills' That Still Haunt Us Today
By Ivana Rihter
Get Even More From Bustle — Sign Up For The Newsletter