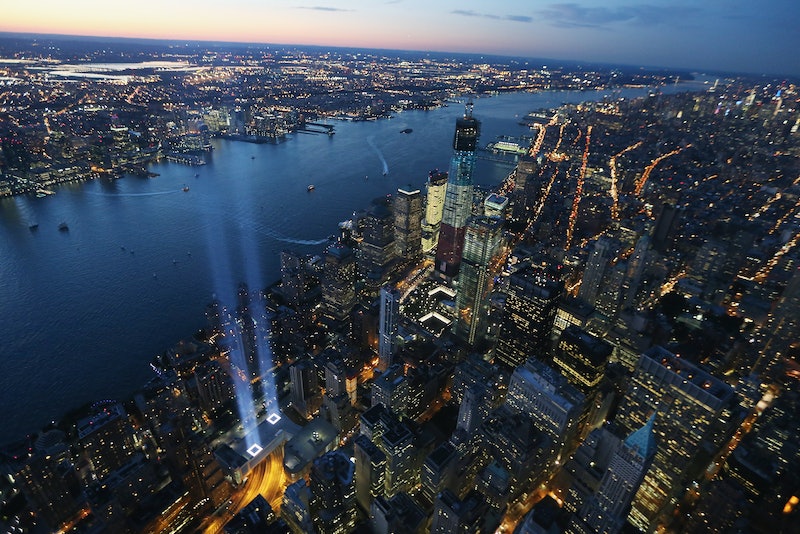 It's been a full six days since Halloween, and we're still uncovering truly distasteful costumes. The latest: Two British girls dressed up as the burning Twin Towers for Halloween, complete with flames, explosions, and little American flags. The kicker? They actually won a Halloween costume contest. Yup, you read that correctly: Two college-aged young women paraded as the gravesite for more than 2,500 people, and they were rewarded £150 for it. And this is after a spat of "blackface" costumes, the Trayvon-Martin-and-George-Zimmerman costume team, and that girl who dressed up as a victim of the Boston marathon bombings. Seriously, Halloween 2013: WTF?

Last week, University of Chester students Amber Langford and Annie Collinge, both 19, attended a Halloween competition at one of their university town's clubs, donning short dresses drawn to look like the buildings. The students have since apologized. "We never meant to be offensive, but we apologize if any offense was caused," they said. "The idea was to depict a serious, modern-day horror that happened in our lifetime and was not intended as a joke." Their college spokeswoman says there's an ongoing investigation into the event, but the school "condemn[s] the appalling photos." The nightclub, too, has also apologized for the "serious error of judgment" made by a DJ who awarded the prize.

You thought things couldn't get any more distasteful? Well, Langford's father is actually a retired pilot who was working in the United States on Sept. 11, 2001. "She knows I'm a pilot and that's not cool at all," he told The Sun. "We will be having a little chat, I think."

And guess what? This isn't the first time this has happened — although it may be the first time a pair actually won money for it. A simple Google search of "Twin Towers Costumes" reveals a bunch of other people parading around in tasteless World Trade Center outfits, including one person dressed as half of an airplane ramming into one of the skyscrapers. But Langford and Collinge's costume seems to be the most publicized.

But why has this Halloween, more so than ever before, been a banner year for the dumb at heart? First there was Julianne Hough donning blackface as a character from Orange is the New Black, then two Florida teens decided to dress up as Trayvon Martin and George Zimmerman, and finally, a woman decided to be a bloodied "Boston Marathon victim" to a work costume party. Oh, and let's not forget about the Virginia mom who dressed up her son as a Ku Klux Klan member because it's a family tradition. To top it all off, that darn "Anna Rexia" costume was still for sale this year. Whatever happened to being a good ol' fashioned pirate, pumpkin or princess?

Social media is both a boon and a burden to attention-seekers. The camera phone is nothing new, but photographs on the Web live longer, and travel farther, than ever before. Whether people in these costumes care to admit or not, they all want to be gawked at by as many people as possible. We're sure your parents or their friends dressed up as some pretty ridiculous outfits back in the day, but they were able to keep it in their own '70s cocoon.

"We live in a society in which self-promotion is a constant, and [with] American Idol or The Voice and for any of these reality shows, the main goal is to be discovered," says Temple University psychologist Laurence Steinberg.

Some claim this phenomenon is all way overhyped, and that we're becoming a nation obsessed with being politically correct. But in regard to the mythical "post-race society," Bustle's own Evette Dionne says:

It is impossible to defend cultural appropriation or Blackface, and the 'race no longer matters' excuse doesn’t help to sell the idea either. Racism is still alive, it’s far from being buried, and post-race ideologies will never come to pass. Sorry. ... It’s a tragedy, not a costume opportunity.

But there will always be tragedy, and there will always be dumb people who think it's hilarious to ridicule these events. To the individuals who continue to dress up as, say, Florida teenagers who were shot and killed, I just have one question: Do you really think it's OK to go out in public dressed like that? Do you need attention that badly? You clearly want someone to take your photo, which will be plastered all over the Internet — which will haunt you FOREVER, btw. Saying sorry isn't gonna cut it, either.

More like this
The Most Powerful Photos From The Weekend’s Abortion Rights Protests
By Melanie Mignucci
The Families Of Grenfell Tower Are Still Waiting For Justice, Five Years On
By Bustle UK
Why You're Seeing Green Bandanas At Abortion Rights Protests
By Lexi Inks
How To Fight For Reproductive Rights, Based On How Much Time You Have
By Courtney Young
Get Even More From Bustle — Sign Up For The Newsletter