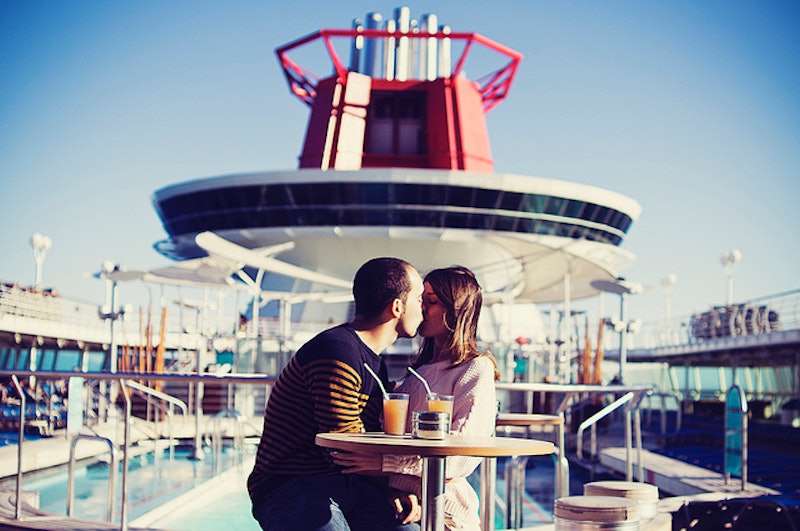 Many of us had our first "relationship" before we knew what a healthy relationship actually entailed. A note passed from desk to desk, a stolen kiss on the playground, and sharing the Dunkaroos your mom put in your lunch bag was really all it took for everyone in your second grade class to know that you and your beau were super serious about each other. But once you moved on from your childhood love after they broke up with you over accusations of cooties, you eventually entered real relationships that involved far more than just sitting next to each other at the lunch table.

Despite having spent at least 18 years learning how to treat other people, there are still a surprising number of legal adults who revert back to their childish ways the moment they start dating someone. And when two of those fauxn-ups manage to find each other and fall in love, only troubled times can follow.

We're all guilty of having some less-than-mature moments in our relationships, but if you find them happening on a regular basis, it might time to do some soul-searching far away from another person's genitals. If you're not completely sure if you're in a grown-ass relationship, check out these immature habits that only middle school couples should be guilty of doing.

1. Complain about each other to their mutual friends

If you absolutely need to vent about your S.O. to someone, make sure you're spouting off to someone who doesn't hold a whole lot of attachment to your partner. It's one thing to complain about the person you love to someone you're close with, but putting one of your mutual friends in the awkward position of feeling like they have to take sides isn't good for anyone involved. Worse, venting to the wrong person can give someone a negative, one-sided view of your partner, and damaging a friendship just so you can feel like you're "right" is something that should be left behind in middle school.

2. Mimic each other's voices during a fight

Once upon a time, I dated a super charming specimen who used a high-pitched voice to mimic me every time we fought. I have the vocal pitch of your average Batman, so it wasn't the most effective way of making fun of me, but it definitely reminded me of fighting with a 9-year-old. If you're stooping so low as to pull this nonsense during an argument, you need to grow your ass up before dating anyone else.

3. Constantly write lovey-dovey stuff all over each other's Facebook walls

They say that the people who do this are just trying to convince everyone else that their crumbling relationship is actually awesome, and normally, they're right. Posting the occasional romantic photo or status about how your partner is "literally the best boyfriend/girlfriend/creature with skin in the world" is all fine and good, but broadcasting your love to the world every day by standing on your roof with a megaphone is only slightly more obnoxious than doing it online.

4. Give each other the silent treatment

Getting ignored is basically Chinese water torture for people with emotions, which is why the silent treatment is so effective at making people angry. If either of you believe that pretending the other person doesn't exist is a healthy way to handle disagreements, you should probably still be asking your parents if you're old enough to finally date.

5. Try to make each other jealous

I'll be the first to admit that I love it when my boyfriend gets a little jealous and protective of me around other guys. It's nice to feel wanted by the person you love. However, making your significant other feel like their relationship with you is threatened is immature and a little sadistic. Should you feel the need to flirt with other people in front of your partner or find other ways to make them question if you secretly want to be with someone else, do them a favor and let them find someone who acts their age.

6. Get offended over bodily functions

A groundbreaking book once told me that everyone poops, and if your partner still hasn't figured that out, they probably still have the mental maturity of that story's target audience. Excessive, unbridled burps and farts are no fun for anyone, but if they make a big stink (get it?) out of you accidentally letting out a toot or making the bathroom smell a little funky, fart in their general direction and find someone else to date.

Many people in failed relationships agree that when things start to go south, sex is the first thing to go. Having mismatched libidos is one thing, but if you punish your partner for something they did by refusing to have sex with them until you feel they've learned their lesson, that's pretty effed up. Sex is something that should bring couples together, and if you're using it like a weapon, it probably means you're not mature enough to play with big-kid toys yet.

"What are you doing right now?" "Who are you with?" "Who's that girl standing five feet away from you in that picture?" "Would you be open to me installing a tracking chip into your neck?" Being so insecure in your relationship that you're constantly checking in on your partner and accusing them of cheating is the number one sign that you're not ready to un-single yourself. Save the leg-clinging for toddlers, and let the one you love be with someone who actually trusts them.

9. Try to change each other

The word "love" should never come with an asterisk at the end. Everyone comes with quirks that may or may not drive us up a wall, but if you go into a relationship believing that you're going to change that bad boy into a Prince Charming or convince that clean-faced girl to start wearing makeup every day, you're due for a reality check. If you're going to enter a relationship with someone, it should be because you already like them just the way they are. Just as your significant other should know that your old habits aren't going to die until the day you do, you need to be able to accept them for who they are. If you can't, maybe they're just not the one for you.

10. Get worked up over social media

When I was a teenager, I got really upset that my then-boyfriend didn't find it absolutely necessary to list himself as being "in a relationship" with me on Facebook. I seethed when I put up a cute new profile picture and he didn't "like" it. And if I was busy committing #3 all over his profile and he didn't respond to any of it, he could expect a whole lot of #4 the next day. I can laugh and cringe about it now because I did all of that nonsense when I was a wee lass, but when couples pitch big fits over minor Facebook and Twitter infractions, it's a clear sign that they should probably break up with each other and with social media.