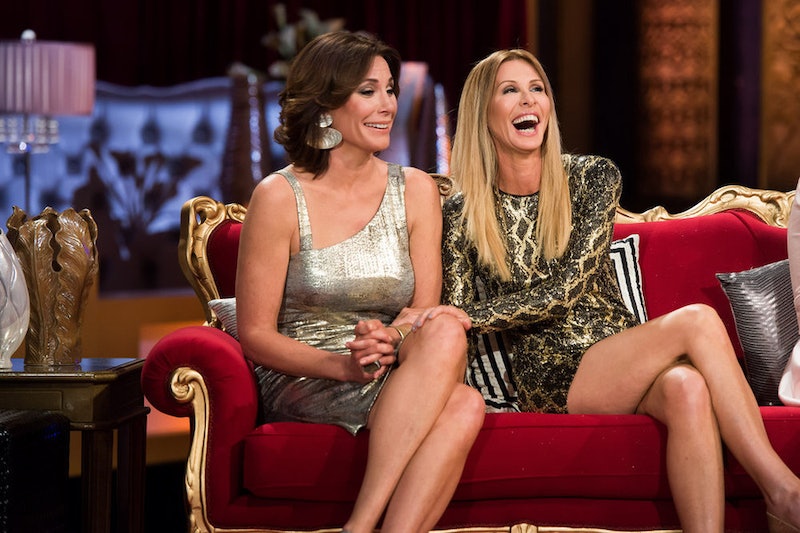 Remember a couple of episodes back of The Real Housewives of New York City when Carole Radziwill finally told Luann de Lesseps that she was dating her niece's ex Adam? And remember how awkward the whole thing was? Good, because I have a feeling this whole thing is going to rear its ugly head over the Housewives this season. Case in point: Luann told Carole that she thinks her boyfriend is "Sonja young" during Tuesday night's episode of RHONY, and you could have heard a boxer's mouth guard drop after she said it.

Yes, clearly Luann is still not over the fact that Carole is dating Adam, a chef in his late 20s. Carole met Adam at Luann's house in the Hamptons at the beginning of Season 7 of RHONY, and he used to date Luann's niece, who Carole also knows and with whom she talked about Adam while they were still dating. Got all that?

Carole waited and waited and waited to tell Luann about their relationship, which is obviously a sign that she is at least a little embarrassed or uncomfortable with it or knows it's wrong in some way, or else she would have just been up front with Luann about it from the get-go. Luann was none too pleased when she heard about the relationship for all of the aforementioned reasons, which she decided to bring up again after the ladies attended a boxing match. Clearly, Luann was hankering to get in the ring herself.

Luann basically reiterated her argument for why Carole shouldn't date Adam, and the she said it. She called Adam "Sonja young," meaning that he's about the age of Sonja Morgan's 20-something boy toys, which Carole was not having at all. She was insulted that Luann would put them in the same category. I suspect that the only sentence Carole would ever want to be in with Sonja is one that lists them as cast members of RHONY.

Adam is actually a bit older than "Sonja young." He's in his late 20s, while Sonja tends to go for dudes aged 25 or below. Ramona Singer also helped Carole out a bit by pointing out that Sonja looks for nothin' but a good time with her cradle robbing, while Carole seems to be taking her relationship with Adam more seriously. Touché, Ramona. Touché.

Luann probably shouldn't really be talking anyway. Remember that guy Jacques she dated who was super-French and also kind of looked like he could be her brother? Well, he was 10 years younger than Luann, which is not as big of an age difference as the Mrs. Robinson thing Carole has going on, but that still goes to show that Luann likes them a bit younger too.

Calm down, cougars. There are plenty of cubs out there for everyone.