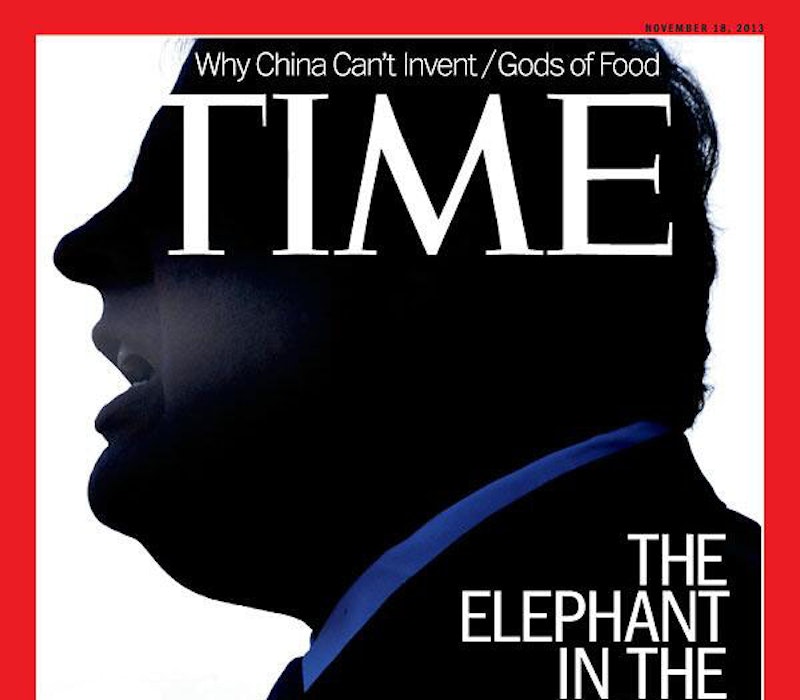 This week, TIME's cover story was about the reelection of New Jersey Governor Chris Christie. Alongside the story came the headline, “The Elephant in the Room.” If you hadn’t seen the cover photo of the gov, you may have thought this headline was about one of two things — A) a play on the popular catchphrase meant to note that the Republican candidate (historically represented by the elephant) won the election; or B) political commentary regarding the fact that the very conservative Christie legalized gay marriage in Jersey this October purely as a campaign tactic and not because he has become any more open-minded.

Either of these metaphors would have been just fine. Either would have been sufficiently, albeit not originally, entertaining. Maybe TIME was in fact thinking of these things when they stamped that not-so-clever headline on the glossy magazine cover — but they made a pretty big (pun intended) mistake.

Accompanying the headline was Christie’s photo: a close-up profile image with everything blacked out but his gaping mouth, obviously meant to showcase the Governor’s double chin and neck fat in the most unflattering way. So by “elephant in the room,” TIME wasn’t creating a metaphor for their qualms with Christie’s political ideologies. They were just calling him fat.

TIME is a world-renowned magazine, one that has showcased some striking, powerful covers — disfigured Afghan women burnt in war crimes, Jonathan Franzen looking particularly pensive and intellectual, an intense Steve Jobs with a glimmer in his eyes. Undoubtedly, the Christie cover will draw you in as well — but not because it’s beautiful and thought-provoking. Rather, because it’s such a blatant example of fat shaming — something we expect from anti-fat Internet trolls and late-night comedians but not publications like TIME. The magazine's latest issue proves, if nothing else, that shaming people for their weight is one of the last forms of verbal slander still accepted as politically correct.

The magazine's latest issue proves, if nothing else, that shaming people for their weight is one of the last forms of verbal slander still accepted as politically correct.

Christie himself is a shining example of what happens when you make inappropriate comments about people based on their race or sexuality. There was that time he referred to the first black female leader of the state Assembly, Sheila Oliver, by her skin color instead of her name. And then everyone instantly labeled him a racist. Or that time he called a black man “boy” whilst speaking at an African-American church. And then everyone instantly labeled him a massive racist. And that time he publicly stated that he would tell his hypothetical gay children that daddy believes marriage is only for a man and a woman and he was instantly labeled a homophobe. The list goes on. Christie has been targeted for being racist and homophobic because it’s just not OK to slander people because of their skin color or sexuality. But it's apparently still OK to harass people for their weight.

Truthfully, it is remarkable is that Christie’s weight is even an issue. He is a politician, not a playboy. He isn’t trying to be the next movie star or Hollister model. He’s trying to run a state (and a country by 2016 if he's very lucky). And quite frankly, whether he is fat or not has nothing to do with how good he is at his job. One could understand if TIME made a joke about Christie’s crudeness or dodgy right-wing politics, but his weight? If they were going to go after him, why not do so because he is a backwards conservative and not just because he has two chins?

Through history, looks just haven’t been a big deal in U.S. politics. Besides J.F.K., no major political figure has ever been renowned for his aesthetics. So why should Christie’s appearance be such a huge deal all of a sudden? Is it, perhaps, because we have become more conscious of health and healthy eating, and thus are quick to assume that anyone overweight must be unhealthy and unfit and thus unable to govern a state? Or have we just become SO obsessed with weight that we cannot even put it aside when considering who is going to run our government? Because if that’s the case, people should be looking for their governors or presidents on the CW.

We obsess over the weights of celebrities and whether they are “too skinny” or “too fat.” We complain when Jared Leto and Matthew McConaughey have to lose 50 pounds to star in Dallas Buyers Club. We complain when Danielle Fishel is fatter than she was at age 15 in Boy Meets World . So perhaps we should not be surprised that people would complain about the weight of the governor of New Jersey. It’s become a shallow world, and maybe we were kidding ourselves when we thought politics hadn’t been breached — when we thought we could still get away with choosing political candidates based of their values and not their suit size.