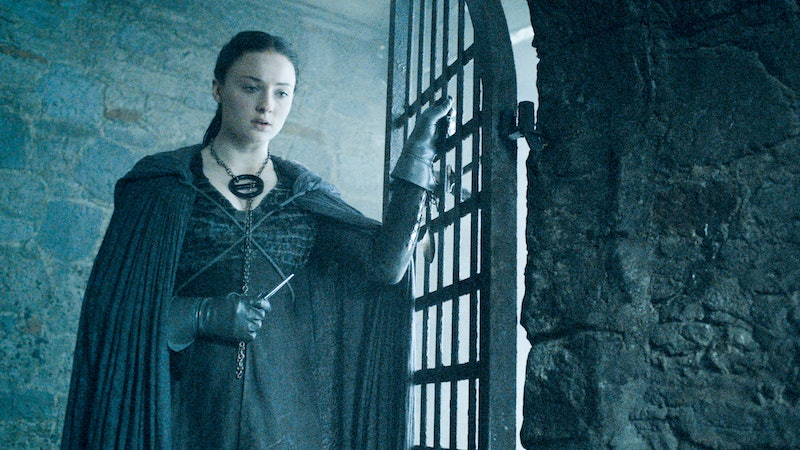 Those fans of HBO's Game Of Thrones that haven't pored over George R.R. Martin's source material are likely befuddled by one name that's been popping up around discussions of Game of Thrones lately: Jeyne Poole. This name has been bandied about continuously over the past couple of weeks in reference to Sansa's storyline, and yet it probably means nothing to you unless you've read A Song Of Ice And Fire. In the books, it's actually Jeyne who is wed to Ramsay Bolton — a fate that has now befallen the eldest Stark daughter on the show. So where is Jeyne Poole on Game Of Thrones now that Sansa's co-opted her story? Does she even exist?

While book-readers often refer to Jeyne as having been "cut" from the show, this isn't entirely true — at least not in the way that characters like Jon Connington and Euron Greyjoy have been wholly excised from the narrative. Young Jeyne did exist on the HBO series... once. She was played by an uncredited extra in the background of one scene in Thrones' very first episode. During the series premiere, "Winter Is Coming," the Starks held a feast in Winterfell to welcome their royal guests, and Sansa could be seen eating and talking with another girl her age:

According to the producers' Season 1 DVD audio commentary, this unnamed girl was Jeyne Poole, who, in the books, is Sansa's very best childhood friend. As the daughter of Winterfell's steward, Vayon Poole, Jeyne grew up closely with the Stark children and traveled south with her father and the rest of Lord Eddard's entourage when he went to King's Landing to become Robert's Hand of the King.

Although this scene was the only time Jeyne was seen in person, she was mentioned one other time on the show. During the first season's fourth episode, "Cripples, Bastards, And Broken Things," Sansa was speaking with Septa Mordane in the throne room when she mentioned her fear that she would only give her intended, Prince Joffrey, daughters instead of sons. "Jeyne Poole's mother had five children — all of them girls," Sansa said in a worried tone.

Jeyne's father, Vayon, also only appeared on Thrones once: during Season 1, Episode 8, "The Pointy End," he walked onscreen long enough to get murdered by some Lannister guardsmen, who were exterminating the Northmen after Ned's failed coup.

But, since we haven't seen or heard from Jeyne since Season 1, it's probably safe to assume that she won't be reappearing anytime soon to reclaim her storyline from Sansa. (And, honestly, she's better off being relegated to the periphery of the Thrones history, considering what befalls her unfortunate character in the books.) Let's just hope that Sansa manages to find a way to rewrite at least some of poor Jeyne Poole's horrific fate.