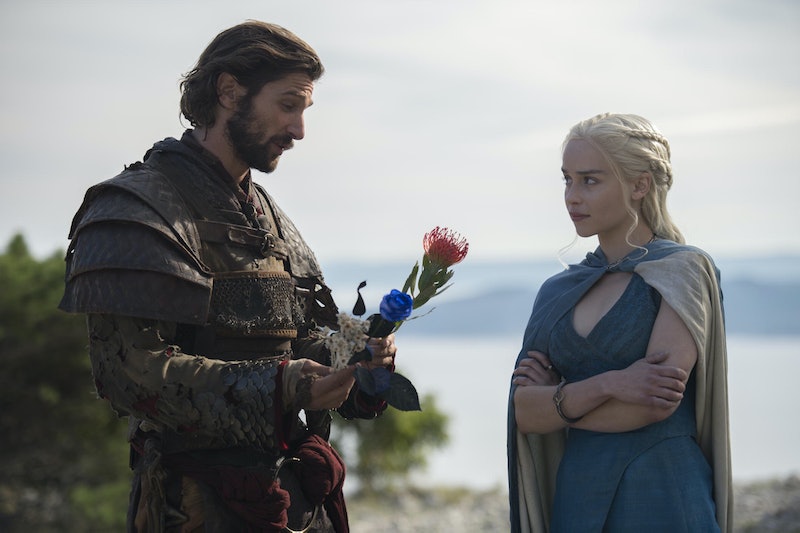 In Westeros the only thing that happens more than death are hook ups. While there are plenty of couples we could be shipping on Game of Thrones, we (and by we, I mean me and most, if not all, women around the world) are dying for Daenerys and Daario to get married and be together forever. Sorry, but what other couple are you actively hoping gets together? In my eyes, they are the only couple worth talking about. Also, how awesome is it to see a woman who is hooking up with multiple men instead of the other way around? We know that Dany could do way better than settling down with Hizdahr Zo Loraq. In fact, I'm in protest of Daenerys and Hizdahr's upcoming wedding altogether, and if you love Daario like I do, you should be too.

In case you missed last week's episode of Game of Thrones, they show Dany and Daario post-sex (still no hot sex scene) talking about their relationship when Daario says the four magic words we've all been waiting for: "We should get married." It was an exciting moment until Dany completely shut him down, which in all honesty is probably best if she wants to take over Westeros, but, still, I am pretty bummed out about it. My fingers will remain crossed that she panics, leaves and runs away with Daario Naharis. There’s gotta be some type of fan fiction about this out there in the world right?

They Are Literally The Hottest Couple In The Realm

There would be no hotter couple in all of Westeros. Try coming up with a couple that could be that sexy together. You couldn't do it.

They would be the William and Kate of Westeros

If Westeros had an US Weekly, they would be on the cover every week. (I hope someone got the Mean Girls reference there).

He's Probably The Best Guy Out There

Besides Jon Snow there are no other guys worthy of dating Daenerys. Could you imagine Littlefinger or Ramsay Bolton with her? Umm, no thanks.

He Knows How To Work A Sword

Okay, so I don't know the exact name for his curved blade, or if there's a special name for it, but he looked damn good fighting on behalf of Dany.

Dany needs someone who can help her make the right choices (besides Jorah) in the battle for Westeros. While we know Hizdahr is a smart choice, we can probably guess he won’t lead her to make good decisions when it comes to ruling Meereen.

He Actually, Truly Loves Her

You know what never happens on Game of Thrones? Two people who truly love each other actually get to be together. Everything is so political and terrible all the time that these two together are the only real romance we get out of the show. Please don’t take that away from us. Do you hear me, George R. R. Martin?

Let's not forget the most important reason