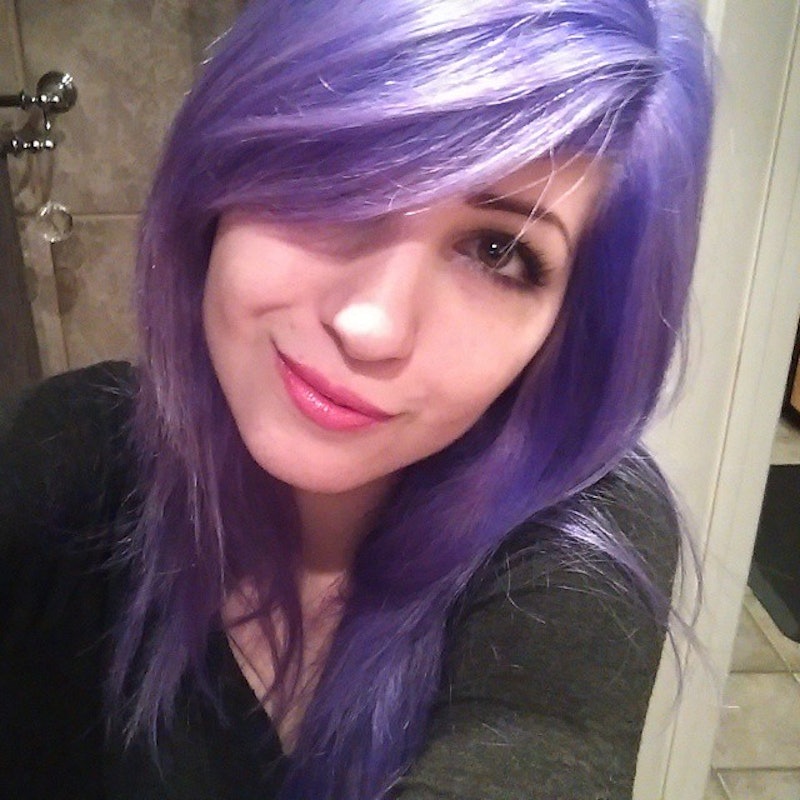 One of the best scenes in The Craft happens when Robin Tunney's Sarah uses the glamour spell to turn her hair blonde right in front of her friends. It's not witchcraft by any means, but the viral video of a girl's color-changing hair has the Internet wondering whether her dyed locks are blue, purple, violet, or pink. Could this turn into the hair equivalent of #TheDress debate of 2015?

It all began when 24-year-old college student Sabrina Abu-Obeid dyed her hair a deep violet hue earlier this month and showed it to her boyfriend. He then noticed that her hair turned a different color when she walked into various rooms around the house. The different lighting in each room created an optical illusion that transformed Abu-Obeid's hair color into various shades, from blue, to purple, to pink in mere seconds.

“He really wanted to show me what he saw so he took out his phone and shot a quick video, which was initially intended for only me to see,” she told Buzzfeed. The clip of Abu-Obeid's color-changing hair already has over 900,000 views ever since the couple uploaded it to Facebook on May 16. Her boyfriend, a musician who goes by the name DJ Monopoli, can't believe his eyes as her purple hair turns into a subtle shade of pink as she walks just a few steps from the kitchen to the bathroom. He lets out an excited "Whoa!" as she twirls her way into the hallway, which gives her dyed hair a bluish tone, and then back to a rich, violet shade as she leaves.

She could play Sarah in The Craft remake with that magical power! Here's another photo of her hair that she posted on Instagram on May 21.