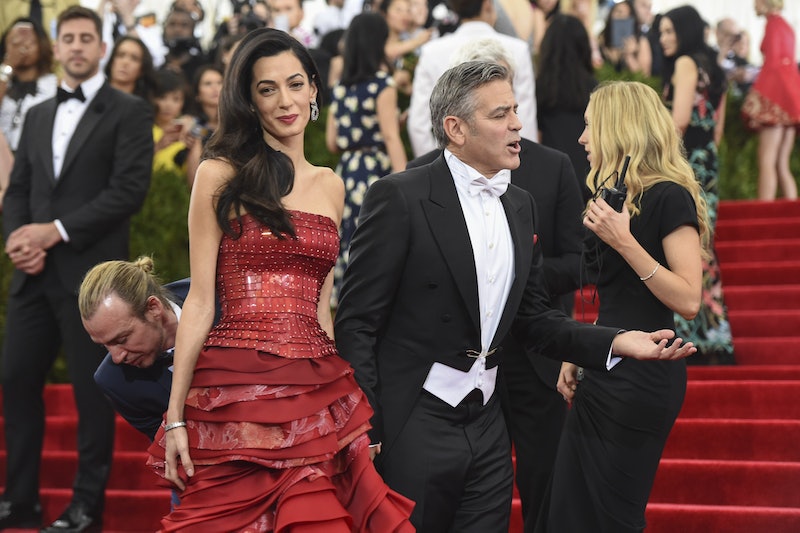 TIMOTHY A. CLARY/AFP/Getty Images
By Lindsey Rose Black
May 29, 2015

It's probably rare for Amal Clooney, brilliant human rights lawyer and growing style icon, to share a headline with Kendall Jenner. But when it comes to choosing stylists for their biggest events, it turns out both Amal Clooney and Kendall Jenner share stylist Alexis Roche for their red carpet looks. Who would've thought?

Despite rumors over Clooney's possible political motivations for wearing Margiela by John Galliano (who still very much in damage-control mode after racial and anti-semitic slurs) at her hubby's Tokyo Tomorrowland premiere, it turns out Roche is the motivation behind her recent fashion choices. As it turns out, Galliano is actually Alexis Roche's partner and close friend. So instead of trying to send any deep political message, perhaps Clooney just wanted to look amazing last week. And, based on the lawyer's MET Gala and Tomorrowland looks, Roche is obviously good at what he does.

The stylist's client roster is impressive, and includes a wide array of A-listers. He's known for developing glamorously sophisticated looks, and has dressed Uma Thurman, Marion Cotillard, and, yes, Kendall Jenner. Roche was behind Jenner's gorgeous midriff-exposing Alaia at Cannes this year.

If Jenner keeps following in the footsteps of Clooney, should we start expecting a law school acceptance letter IG pic sometime in the future? Given Kendall's fashion hustle and business savvy, I wouldn't put it past her.