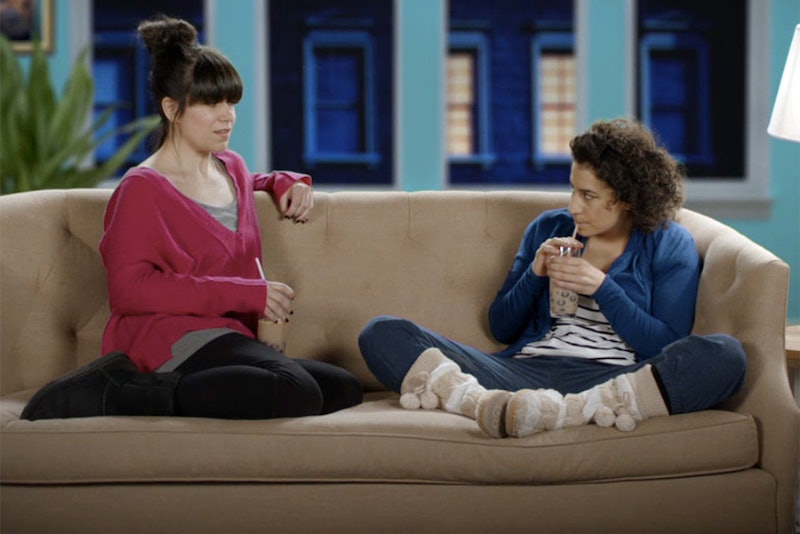 As a child of the '90s who was raised on NBC's Must-See-TV lineup, I remember the days of television past when characters from one show would make regular crossover appearances on other shows on the same network well. Remember Phoebe's twin sister Ursula on Friends? Well — Ursula was actually first introduced as the the worst waitress ever on Mad About You ...which also included appearances from Seinfeld character Kosmo Kramer. Similarly, Jamie of Mad About You appeared in an episode of Friends , where she mistakes Phoebe for Ursula.

The fun thing about inter-network crossovers is that not only is it fun to see two worlds collide, but it makes the network seem like a close-knit group of artists instead of just some stuffy TV platform. For both reasons, I hope Inside Amy Schumer includes even more characters from Comedy Central shows, present AND past! Here are the top seven guest stars I'd love to see on the show and the characters they should play!

Amy Sedaris As Jerri Blank From Strangers With Candy

I would kill to see Amy Sedaris bring this character back to Comedy Central, and I see no better show for the comeback than Inside Amy Schumer.

Kristen Schaal As This Badass Correspondent From The Daily Show

Kristen Schaal's feminist diatribes about abortion and rights to birth control would pair perfectly with the show's sensibilities. Plus, as the producers of Bob's Burgers or Last Man On Earth can probably attest, every show is made better by involving Kristen Schaal.

Nick Kroll As ANY OF HIS CHARACTERS From Kroll Show

(But particularly Liz, from "Liz and Liz.") More than anyone on this list, I would love to see Nick Kroll bring his expertly performed characters to Amy Schumer's world. Imagine Amy on a date with Bobby Bottleservice!

Jenny Slate is the best thing to happen to entertainment since the invention of the television, and she needs to be on Inside Amy Schumer.

Honestly, I just wish Kroll Show was back on the air.

There are so many possibilities here that she show needs to pursue.

Sarah Silverman has changed a lot in the past few years. Her comedy is still going strong, but she's recently started opting for savvy political humor and observations about feminism as opposed to her earlier humor. Oh what a wonder it would be to have the foul-mouthed, sociopathic version of her we saw on The Sarah Silverman Program pal around with Schumer for one glorious sketch!