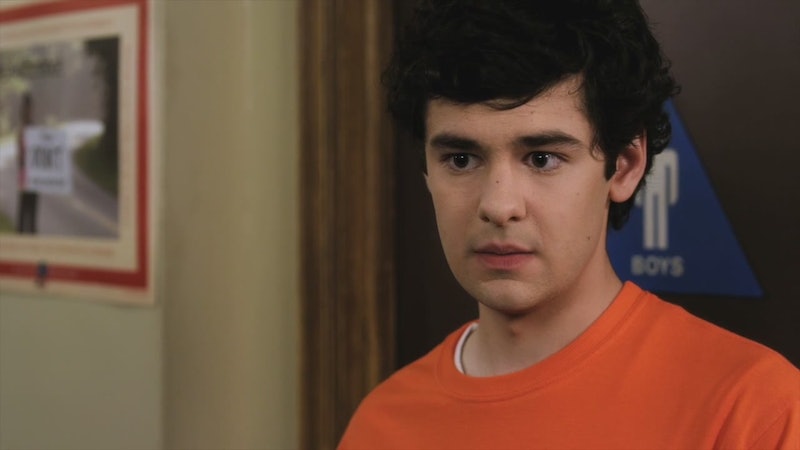 There are so, so many Charles DiLaurentis identity theories out there, it's enough to make your head spin. I mean, could he be Jason's twin? Related to Spencer? Not related to Spencer? What exactly makes him a DiLaurentis? Honestly, at this point, just about anyone could be Big A, but there's one person who's been looking more and more likely to be the real Charles: Lucas Gottesman. After all, Lucas has always slipped in and out of the A hoodie with ease, and he's never exactly been the most trustworthy dude on the show — so could he be Charles' secret alter ego?

Now, of course, there are a couple of holes in this theory — the largest of which is Lucas' age and appearance (he doesn't have the DiLaurentis blonde hair, and he looks a little on the youthful side to be part of the N.A.T. generation). That said, what's a little hair dye and lying about your age when you're running an operation that includes an evil-genius Dollhouse, complete with crazily sophisticated surveillance and doors that lock on their own? Whoever Charles is, I think we can all agree that he's well-equipped to handle a touch of espionage.

Need a little more convincing? Here are a few reasons Lucas might be Charles.

He's Been Suspicious For Ages

Even before the whole #BigAReveal, Lucas was always one of the A frontrunners — I mean, remember that time he trashed Ali's memorial while wearing a black hoodie? Their bad blood has always served as a great potential motive for all of the A madness, and we all know he's got the smarts to pull it off.

Remember the three anagrams that all spelled "Charles DiLaurentis"? Well, as it would turn out, "Chandelier's rituals," "Sister launched lair," and "A ruler's list chained" also handily happen to spell out "Nerd Lucas is the liar," as a Seventeen reader pointed out.

If you re-watch "This Is A Dark Ride" (you know, the Season 3 Halloween episode on a train with the Adam Lambert concert), you'll notice that there's definitely something fishy going on between Jason and Lucas. Could it be some sort of secret long-lost twin business? Hmm...

In a recent interview with Fashion & Style, the actor who plays Lucas, Brendan Robinson, gave a few hints about his role in Season 6. He couldn't give anything concrete away, but he did reveal that "Lucas will be involved" in the resolution of the "current A mystery" — so at least we know he's at the very least connected to all the crazy Rosewood drama.

He Could Also Be Uber A

Even if he doesn't turn out to be Charles, there's no denying that the guy is pretty darn suspicious. Fan lore points out that his Germanic last name goes nicely with the similarly Germanic Uber A. Plus, showrunner I. Marlene King told Entertainment Weekly that Uber A could still be out there, so who knows what could happen next?

Whether he turns out to be A team-adjacent or A himself, it'll be interesting to see which side Lucas falls on as we make our way through PLL Season 6.