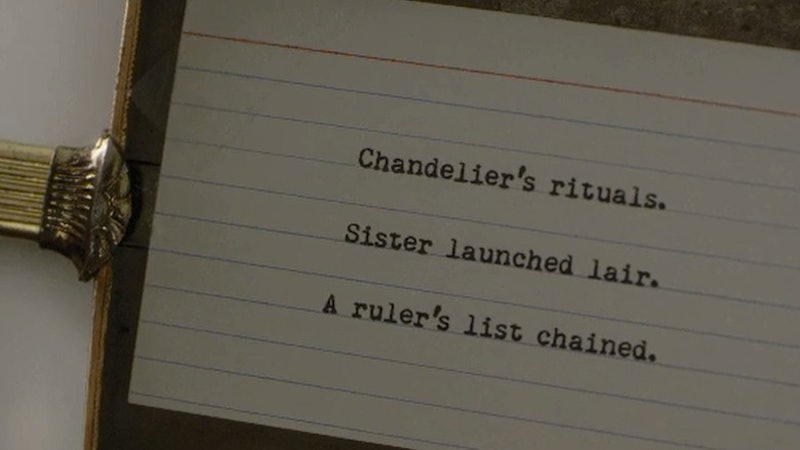 Being a dedicated Pretty Little Liars fan is hard work, and not just because of the anxiety that builds every time the show goes on hiatus. Diligent fans are basically real-life Spencer Hastings when it comes to finding out Big A's real identity, and we use every single clue that the show gives us to try and crack the case. It's not a futile cause — in fact, writer Maya Goldsmith told Bustle that nearly all of those clues and anagrams Pretty Little Liars fans find have significance. Perhaps the biggest example of this was the anagram that revealed Charles as Big A. The girls found a note in Mona's room with three phrases on it, all of which could be rearranged to spell Charles DiLaurentis, the person we now know as Big A. The Liars weren't unable to decode the message (until Spencer got some help from blocks in the dollhouse), but the show's many smart, dedicated fans figured it out a full episode ahead of the Big A Reveal.

That's not the only time that Pretty Little Liars has given us some major clues through words and symbols. If you're watching closely enough, you may have already seen these mini-clues. If not, don't worry — I have them all here for you. Here are the anagrams and other messages that could hint at big things for Season 6. And for more clues, check out Bustle's Pretty Little Liars podcast.

The Other Message In The Charles DiLaurentis Anagram

Charles DiLaurentis is also an anagram for the phrase "Nerd Lucas Is The Liar," which could mean that Lucas might be A after all. Could it be a red herring? It's very possible, though I can't help but think back to the Halloween episode "The First Secret," when Lucas tells Mona that they'll get back at Ali one day. Could "one day" mean when they both become A?

There are several anagrams that can be formed from "Radley Sanitarium." I've found quite a few in my internet travels, including "Mary A. DiLaurentis," "Maya R. DiLaurentis," and "A DiLaurentis Army." I suspected that there was another member of the DiLaurentis family we didn't know in Radley, and now it seems likely that it's Charles. Could Charles have built an "A Army" while in Radley?

Remember Sara Harvey, the girl who went missing around the same time that Ali did? Well, that phone number that the girls get that belongs to Varjak, 727-242-7839, just so happens to spell out her name. It could be a coincidence, but since creator I. Marlene King also tweeted that we would find out what happened to Sara, I'm thinking not.

In the Season 3 episode "This Is A Dark Ride," the girls discover Alison's body (note: not really Alison's body) underneath an ice cooler on the ghost train. Check out the name of the funeral company — it could very well be a reference to Charles DiLaurentis. If you remove some letters in the above phrase, you get the name CHARLES in order. "Sons" could be a wink at the fact that it seems the DiLaurentis family really had two sons — Jason and Charles.

You might have missed this clue in the Season 5 finale, but it points to Andrew as a major player in the A game. Remember this home video of Mrs. DiLaurentis with two boys, one of whom could be Charles? Well, it was taken at the Campbell Farm... as in Andrew Campbell.

That's not the only thing that's weird about the farm. Check out this symbol:

That's from the Campbell farm, which Bustle's Samantha Rullo pointed out looks a lot like this compass symbol on the lighter that Toby finds in the woods during the Season 3 episode "A Most Dangerous Game."

Hmm... Could that be a hint that Charles dropped this lighter?

These are just a handful of the clues that fans have picked up during Pretty Little Liars' five seasons, and I'm sure there are even more we've yet to uncover. Keep sleuthing, friends — it's so, so worth it.