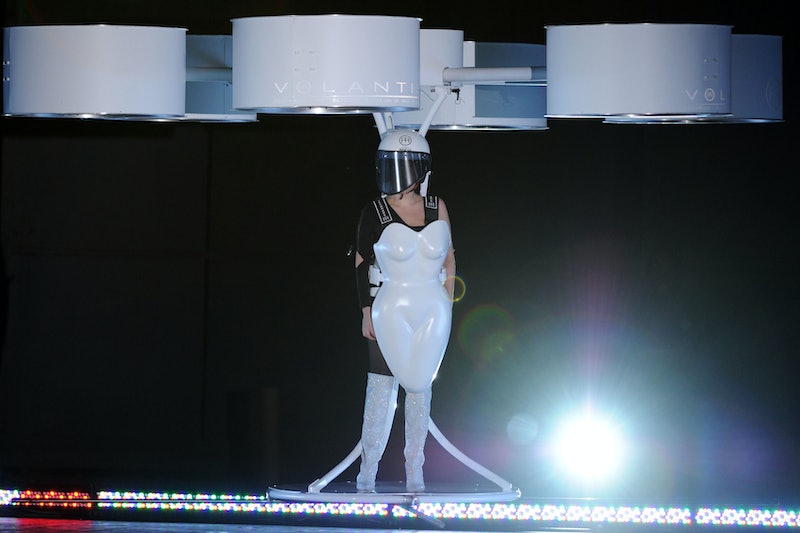 Just when we thought Lady Gaga couldn't get any weirder, she lifts off. In a freezing warehouse filled with journalists, Mother Monster announced the debut of her beloved Volantis, a flying dress composed of a fiberoptic bodysuit and six overhead booms that's powered by 50 volts of batteries. After declaring this the "beta test flight," Gaga stepped into the contraption and — flew. At least for several feet.

Don't expect to see Volantis in concert, though. "It's not really a performance garment," said Gaga. Volantis has a much bigger future ahead of it, though it's unclear exactly what that future will look like. Gaga, as usual, is dreaming big: "There’s so much more that we plan to do with her, so many dreams that we have for the future of travel, for technology, fashion, and the arts, but most importantly today, we just want you to feel inspired." Post-flight, she told reporters that they "worked on [Volantis] in the desert very often ... hopefully she will be the future of many different things."

It's hard to imagine a use for Volantis that goes beyond purely fun and ornamental — after all, it's not like we're waiting for someone to invent a device that can transport people through the air — but if there's one thing we've learned from living in the Era of Gaga, it's not to underestimate the creativity of her Haus.

The most artistically interesting element of Volantis is the clear reference to Botticelli's "The Birth of Venus," which is displayed (though fractured) on the cover of ARTPOP. The fiberglass bodysuit of Volantis takes the shape of a naked woman's torso, legs pressed together like Botticelli's Venus, and the motion of the dress's flight mimics the implied motion of the painting, in which Venus glides from ocean to shore. Volantis is the perfect vehicle for Gaga right now, as it joins together her two biggest obsessions at the moment: space and the goddess of love. Note: "Volantis" is the Latin word for "flying."

For the artists and dreamers among us, it's reassuring to see that Gaga can still surprise everyone with secrets pulled from the depths of that infamous wardrobe. "Although [Volantis] is a vehicle, she is essentially a metaphor for me," said Gaga. We'd expect no less.

More like this
Lizzo Celebrates Juneteenth With Pan African Flag Dress
By Dominique Norman
Harry Styles' New Gucci Collab Is Serving Woodland Chic
By El Hunt
Megan Thee Stallion Wore The Famous 'Pretty Woman' Cut-Out Dress
By Dominique Norman
What Is Ariana Grande's Net Worth? When It Comes To Money, She Has No “Problem”
By Hugh McIntyre
Get Even More From Bustle — Sign Up For The Newsletter