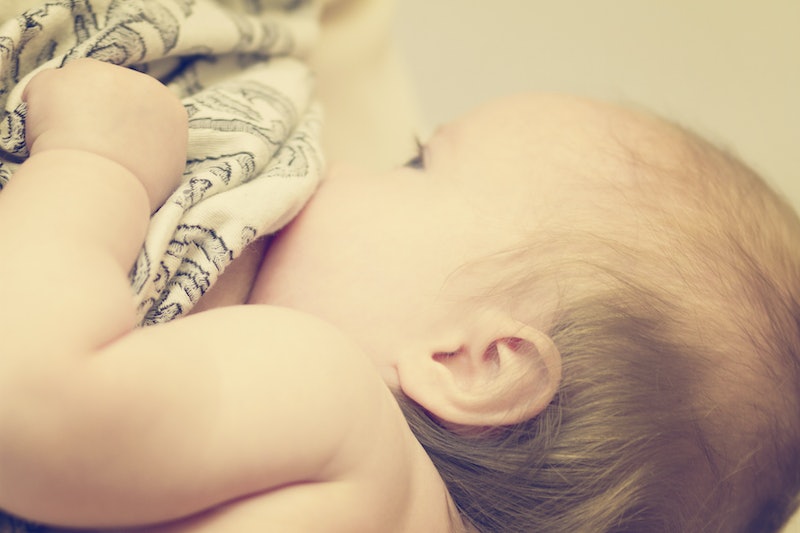 I'll be honest: I have no idea why breastfeeding in public continues to be such a huge issue — and yet, inexplicably, it does. But that's why new mom Conner Kendall's response to being shamed on Facebook for breastfeeding her son is so important: It highlights not only what's wrong with how society looks at breastfeeding in particular and boobs in general, but what's more, it demonstrates what we can do to realign our thinking. Because seriously, you guys. It's high time we got over ourselves and stopped policing women's bodies.

Here's the story: On May 27, Kendall went to a TGI Fridays in Terre Haute, Indiana while running errands at a mall in the area. Her newborn son got hungry (as babies are wont to do), so she started breastfeeding him. Unbeknownst to her, however, a man who was sitting three tables away with his daughter took a picture of her doing so — and then posted it on both Facebook and Instagram along with the following message (all of which has a big ol' “sic” in front of it, because there are a huge number of typos in it):

OK moms out there.. I know when a baby is Hungry they need fed. I went to know if this is appropriate or inappropriate as I'm trying to eat my Fridays, there are little kids around.. I understand feeding in public but could you at least cover your boob up?! Your input is needed!

Ugh, you guys. Ugh. As Laura Beck at Cosmopolitan wrote, “This is incredibly disingenuous because he clearly wants to shame her under the guise of asking opinions. Yuck.” Yuck, indeed.

According to People, Kendall found out about the post via a local Facebook group from moms to which she belongs. “Another member in there was friends with him on Facebook and had [seen] what he posted,” said the new mother. “She screenshotted his post and posted it on our group page saying, 'How could someone post this… so disrespectful to take a picture.'” Kendall saw the photo on the group's page later that day — and when she took a closer look at it, she realized it was of her and her son.

After she found out the name of the man responsible for the post (who, by the way, has since deleted it), Kendall wrote him a lengthy but wonderfully-stated response, which she also posted on her own Facebook page. “Dear Mr. (Name removed, because I'm not bashing like I was bashed),” she began:

I just wanted to let you know that I am the mother who was breastfeeding my son at TGI Fridays today. I am also the woman that you felt the need to take a picture of while I was doing so. Then proceed to post said picture on social media in a shameful manner. As I was admiring how adorable your daughter was, you were posting pictures of me on Facebook and Instagram.

She went on to note that, while she “in no way, shape or form [owes him] any explanation,” she wanted to “clarify a few things”: She did nothing wrong (and, in fact, is backed by law in her right to breastfeed in public); she turned away to latch her son and pulled her shirt back up as soon as he was finished out of respect for everyone else in the restaurant; she doesn't use a cover because her son hates them (not only does he not eat with them over his head, but even worse, he screams his lungs out); and so on. She stated that she breastfeeds “because it is what is best” for her child — a claim which science supports — and, moreover, that his discomfort with her breasts is not her problem to solve (as is the case with so many other issues). “I get that you felt uncomfortable looking at my breasts,” she wrote. “Here is a novel idea: Don't look at them.” Makes sense, no?

I would argue, though, that the most important point she made is this:

I strongly encourage you to educate yourself as well as your daughter about breastfeeding. Breasts are meant to be used to feed our young. It is society that has sexualizes them. Children do not sexualize breasts until they are taught to do so. I pray that if in the future your daughter chooses to breastfeed that she is not shamed and does not have her picture plastered all over social media.

Kendall's story is a perfect example of why we need things like #normalizebreastfeeding. The hastag kicked up on social media earlier in May with the support of ELLE Australia's June issue, which features model Nicole Trunfio breastfeeding her four-month-old son on the cover. As Bustle's Jamie Kenney wrote at the time, Trunfio's “main point — that breastfeeding is a completely normal aspect of human life and people frankly need to get over their hang-ups — is made succinctly and eloquently” — and it's something that each and every one of us desperately needs to take to heart. Feeding your child when he or she is hungry is what a good parent does — and we need to stop shaming breastfeeding women for being good parents.

Although, as Kendall noted, it's not her job to explain breastfeeding to the man who posted the photograph, she actually did take it a step further and responded both to his comments and to those left by other Internet users/trolls. The result is something like a breastfeeding FAQ, and it's kind of amazing. While I highly suggest heading over to her Facebook post to read the whole thing, here are a few of what I think are the best answers:

Q: “Why didn't she feed him before she left home?”

A: “I did, we live an hour from Terre Haute and had already been there over an hour. It had been almost three hours since he ate last.” Fun fact: Babies do, in fact, need to eat every two to three hours.

A: “My son hates covers, he fights them, screams, and doesn't eat under them. So I would have been disturbing your dining experience even more.” I don't know about you, but I'll take public breastfeeding over a screaming baby any day.

Related: Someone else commented, “I don't want to see that!”, to which Kendall replied, “Avert your eyes!” And she's absolutely right — you don't want to see it? Then just don't look at it. It's not like anyone is sitting there, making you stare at them with some sort of weird, A Clockwork Orange-esque viewing device.

Q: “Should have pumped before they left and brought a bottle.”

A: “My son doesn't like to take a bottle and fusses with it more than anything. One of the reasons we were even in town was to get a new power cord for my pump.” Again, would you rather have a screaming baby or some boobs?

Q: “If it's a natural thing, then why can't men carry around urinals and use them wherever, whenever? That's a natural bodily function too! Same thing.”

A: "First of all, milk from my breasts is not bodily waste, and second, unless the reason you have that urinal is because you intend to use it to feed your child, then in no way is it the same as me nursing my baby.” Ayyyy-men (and besides, not having an actual urinal around isn't necessarily a deterrent to peeing for some dudes). A more apt comparison might have been, “If I get hungry, then why can't I carry around a snack and eat it wherever, whenever?” — which you are absolutely welcome to do.

Q: “There were children there.”

A: “Children are not born thinking that breasts, or anything, are sexual. They are taught to think that way by society.” THIS. A thousand times this. Boobs are not inherently sexual — and for that matter, neither are bodies. They can be used for sexual purposes, but they are also capable of so much more. And hey, guess what? The primary purpose of breasts is not sex. It's feeding babies.

Q: “If the baby was going to get hungry then stay at home.”

A: “I can't even justify responding to this, that is how absurd this statement is.” For reals. Again with that whole “babies need to eat every two to three hours” thing — it is absolutely unreasonable for us to expect new mothers to sequester themselves away in their homes until their children are on solid food.

Go. Go read Kendall's entire post. Share it, too. This is a message we need to spread as far and wide as we can.