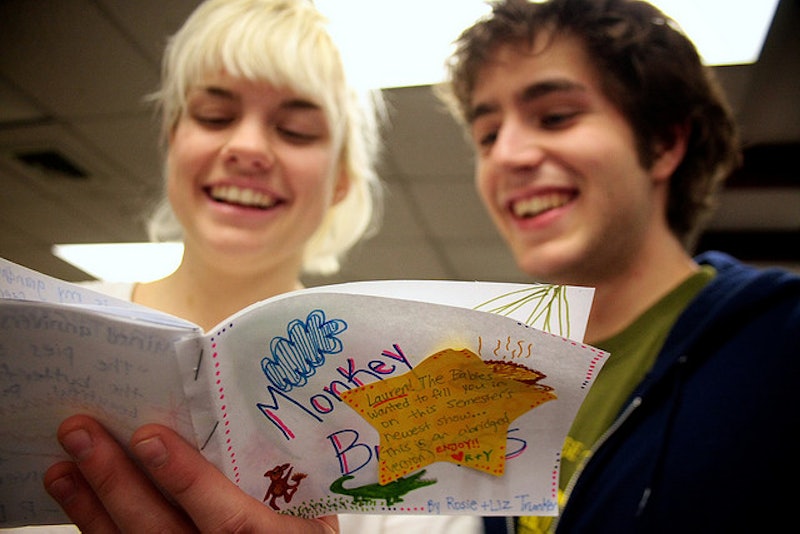 In high school, the topic of many lunch conversations with my besties typically surrounded our latest Harry Potter theories or what we thought of the newest Sarah Dessen novel. There were always the occasions we'd spot each other in the hall first thing in the morning and immediately dish our feelings regarding the latest Gossip Girl book. We had very BIG opinions about these important story lines. They had to be shared.

If you're an obsessive reader, you know there's a certain joy in having a bookish BFF. It's not weird to have emotional breakdowns over That One Character who Author-So-And-So killed off. You never have to worry about sounding like a raving lunatic when gushing your heart out over fictional love interests. They just get it.

That being said, there are certain inevitable occurrences that happen when you have a bookish bestie. All my readers out there know what I'm saying. But if you don't, here's a list of things you probably can't help but relate to.

You're never at a loss of what to read when you have them by your side. "Oh, you liked The Kite Runner? HERE ARE 16 DOZEN OTHER BOOKS YOU MIGHT LIKE TOO!" Haters can side-eye your enthusiasm all they want, but they don't know the exhilarating feeling of gushing over your favorite titles.

You're Forever Borrowing Each Other's Books

Just as long as you don't dogear the pages, everything will be fine.

You Always Have Someone to *Squee* With At Book Events

Look, authors are totally celebrities, too. Bookish BFFs understand the squeal-worthy excitement of going up to an author so they can sign your book at an event. I mean, they actually wrote the words inside the pages that your eyes absorbed. HOW CAN THIS NOT BE A COOL THING?

Lets be real. When sh*t goes down in a certain part of a book, there's no one you'd rather talk to than your bookish BFF. You spend hours dissecting everything leading up to THAT ONE THING and probably find yourself repeating, "OMGZ, I can't believe that happened."

Reading the book before seeing the movie is a necessity. In most cases, you probably read the book months or even years before it was adapted into film. Your other friends can get all eye-rolly when you start picking them apart, but your bookish BFF totally gets it.

You'll Go Book Shopping Together, and Neither of You Think It's Lame or Boring

Because bookstores can never be boring.

You have differing opinions over guys involved in a love triangle, and disagree if a certain main character is unlikeable or not. But that doesn't mean you're any less of bookish BFFs. In fact, your differing reactions is what keeps things interesting.

They ain't even mad, either. They'll shake away enough of their post-sleep haze to reply, "I KNOW, RIGHT?!"

There's nothing worse than finishing a novel that your bookish BFF hasn't read yet. You have so many pent-up feelings that are on the verge of exploding, which is how you end up forcing them to drop everything immediately so they can gush along with you.

Like, you know, that part in Half-Blood Prince? Yeah. They're there for you with a big ol' hug.

You Can Call and Ask Them Any Strange Bookish Questions, and They Don't Think It's Weird

"I got a copy of Pride and Prejudice at this thrift store but I think there's a booger on page 6. I'll send you a pic. AM I WRONG?"

Ranting comes with the territory of having a bookish BFF. It's in the unofficial contract. You can verbal-diarrhea to your heart's content about a certain passage, scene, or character. It's 100 percent allowed.

Spoilers are one of the seven deadly sins of the bookish world. When it comes to revealing any major plot points, you keep your mouth shut. Plus, it's always fun to watch their reaction when they get to *that* part where things get REAL.

But You Totally Fight Over the Comfiest Place to Sit

DIBS ON THE SQUISHY ARMCHAIR. That super springy couch makes your butt go numb. You both know it's all about the cozy reading habitat.

Bags under the eyes? Uncombed hair? All signs point to another late night reading escapade. The be-all, cure-all for your bookish bestie? COFFEE. LOTS OF IT.

I mean, really? How is reading too much even a bad thing? To everyone who has ever told you to get a life: Um, EXCUSE YOU. You know your bookish BFF can always step up and help you tell off those haters.

Your Bookish World Would Be a Dark, Sad Place Without Them