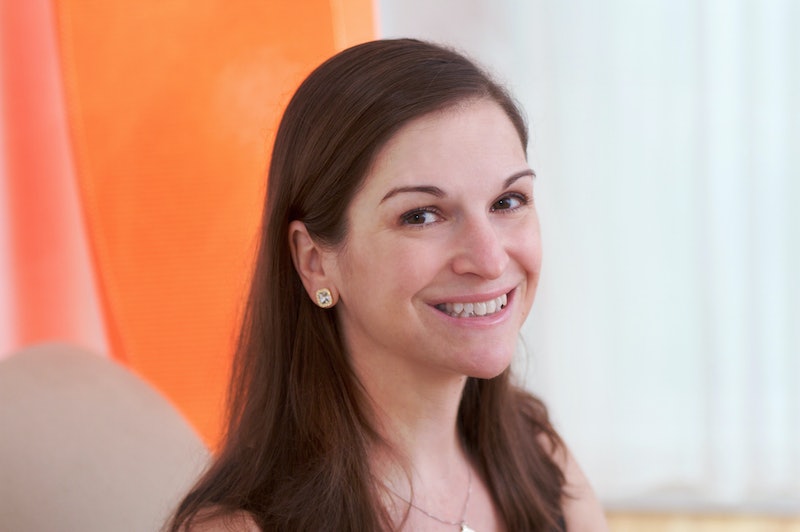 It was the picture reblogged 'round the world (well, the Internet). 13 manuscripts, lined up next to each other, each with a label on top of their abandoned, unpublished pages. When Sarah Dessen first posted the photo back in July, she only meant to give her Twitter followers a look at the contents of her attic, maybe joke a bit about, as she said, being either "really perseverant or just really stupid." Instead, she watched in awe as fan after fan latched onto the image and shared it all over social media, seemingly stunned by the fact that an author as successful and prolific as Dessen could have failed so spectacularly — over and over and over again.

Yet for Dessen — who readily admits she has "a pattern of starting books before I'm actually ready" — those 13 novels don't represent defeat, but rather, small setbacks on the way to something greater. Or, as she explained back in July, "maybe I NEED the misfires to get to the bullseye."

One year later, she's reached the target. Dessen's 12th novel, Saint Anything , hits shelves on May 5. A moving and witty story about a teen girl's journey of self-discovery, it's the author's strongest work yet — and, with drug abuse, prison time, and fractured family relationships at the center, also her darkest.

Saint Anything by Sarah Dessen, $12, Amazon

That, for Dessen, meant delving into a part of her past she'd never before explored. Back in 2013, the author admitted on Twitter that she'd had a drug problem while in high school, and that her adolescent years were a "pretty dark time." Although she'd attempted to write about her past before, most prominently in a novel she set aside before Saint Anything, she found herself unable to get it right.

"When I was in high school, I was really not very happy, which I think is typical of people who write about high school," Dessen says. "I felt really invisible, and I did a lot of stupid things to try to deaden the pain... but every time I tried to write about that, it was just too close. I couldn’t do it."

Eventually, she realized that the only way to discuss those issues was to come at them from a different angle — specifically, from the voice of Sydney, Saint Anything's heroine, who witnesses her older brother, Peyton, destroy his life through drugs and a DUI.

"I knew a lot of guys like Peyton, people who were affluent kids, who had everything you would ever think, and who still made these terrible choices and got into trouble just for the thrill and the adrenaline of it," says Dessen. "I think in that way, I’m writing about a part of my own experience that I never could write about before."

"I felt really invisible, and I did a lot of stupid things to try to deaden the pain... but every time I tried to write about that, it was just too close. I couldn’t do it."

Like many of the author's other novels, Saint Anything is set against the backdrop of high school, a landscape she makes achingly vivid with classrooms, cliques, and those dreaded afternoons full of homework and SAT practice. And then, of course, there's the requisite Sarah Dessen love story. Unlike her past works, though, it's not the focal point of the novel, a purposeful change by the author.

Still, Dessen has grown accustomed, if not happy, with finding her books placed in the romance section of Barnes & Noble, instead of the more fitting Teen Fiction.

That Summer by Sarah Dessen, $14, Amazon

"I do have a love story, and my books do have a pink cover, a 'girly' cover. But I’ve always felt that there’s more to all of my books than just a romance," she says. "It put me in a category, and I think I have potential to be more than that."

With its narrator's friendships and family life taking center stage instead of a romance, Saint Anything is Dessen's best chance yet of breaking out of that label. Perhaps critics will finally see her as the author she truly is: one of the biggest names in YA fiction, a writer whose depictions of teenage girls and their full inner lives deserve to be recognized — and categorized — alongside those by names like John Green and Rainbow Rowell. Female narrators and their relationships with other women have been prevalent in all of Dessen's works, and in Saint Anything, feminism plays an even bigger role than usual.

"That goes back to my DNA," she explains. "My mom was a card-carrying Ms. magazine subscriber... she fought hard to make it clear to me that I could do whatever I wanted as a girl, and to point out good examples of women who were triumphing."

Dessen's mother was a major influence on Saint Anything, with the author crediting her complexity with coloring that of Sydney's mother, a well-meaning woman whose concern for her troubled son often overshadows the other relationships in her life.

"My mother was never just a one-note character to me. My mother contained multitudes. She was just as complicated as I was," Dessen says. "A lot of people who’ve read Saint Anything are like, 'oh this mother, I just wanted to shake her, she was just so awful,' but I don’t see her as awful. She just wants the best for her kids, and in her mind, she’s kind of failed with Peyton, and so she’s trying to fix that... there are no villains in these mothers and daughters."

Besides, Dessen adds, "it’s not that interesting to write perfect characters.... flaws are more fun."

While the author has always written complicated figured in her novels, she credits raising a daughter, 7-year-old Sasha, with changing her perspective and helping her become "more sympathetic" to her non-teenage characters. Similarly, Dessen is intent on instilling feminist beliefs in her child, despite some opposition; the 1st grader's love of princesses and pink is well known to Dessen's 256,000-plus Twitter followers, to whom she vents her frustrations over sexist Happy Meals and gender-coded toy aisles.

"My mom was a card-carrying Ms. magazine subscriber... she fought hard to make it clear to me that I could do whatever I wanted as a girl, and to point out good examples of women who were triumphing."

"I’m very aware of it," she says of the sexism she encounters on a daily basis. "I think it’s something you have to be very conscious of. My mom made it look very organic, and I’m trying to do the same thing with my daughter. Because nothing gets my back up faster than people making it seem like you can’t do something because you’re a girl."

A vocal supporter of her fellow females, Dessen fills her Twitter feed with chats with authors like Laurie Halse Anderson and Jenny Han. Recently, she geeked out over running into Jodi Picoult; to me, she professes her admiration for the Nineteen Minutes author and others like Anne Tyler for playing the "long game."

"Currently, I’m at a place in my career where I’m looking at authors who have had these long writing careers and written lots of books to see how they do it," says Dessen. "I’m looking at the long haul now."

Which means, for Dessen, not stressing out over her next book, or starting a new one simply "out of panic" and being forced to set it aside. She admits that normally, by now, with a book about to come out, she'd already have a follow-up in the works, but, as she's learned all too often, rushing into a novel isn't always the best plan.

"I don’t want to write another book that’s out in my driveway with those 13 other books," Dessen says. "So I’m trying not to do that this time. I haven’t been writing, which feels very weird, like I left the iron on. It’s a strange feeling, but I’m hoping that maybe I can take that step out of my repertoire."

If it happens, though, and another novel gets abandoned on the curb? Dessen will be disappointed — and then she'll talk about it online.

"I think Twitter’s a great thing for that, because you get this little behind-the-curtain view of other writers who are open about, 'ugh, I’m having a terrible day today,' or 'I feel like a failure," she says. "I want to be open because when I’m struggling, I want to know that other writers that I admire are also struggling, that it doesn’t come easy."

Still, admitting her failures was "hard," she says. "It was terrifying."

Although Dessen says the plot of Saint Anything just "bubbled up," she knows it was an anomaly, especially for a 12th book, when a writer is "no longer the hot young new thing." She readily admits that she doesn't know how many "big books" she has left in her, how many times she'll find a new idea or be sent out on tour. She wants to write more, and probably will, but has adopted a more relaxed attitude towards the future than ever before, saying that "if something doesn’t come, then something doesn’t come."

In the meantime, she's busy promoting Saint Anything's release, traveling the country on tour, and, of course, reporting the events of her day to her loyal followers. Most of all, though, she's trying, in her words, "to be present for whatever is coming" — may it be the start of a new book or simply continued support for the one already out.

"I’ll be excited to get back to work, whenever I do," she says. "When I’m not writing I just feel very empty, like I’m not worthy of anything."

"But," she adds, her newfound mellowness in full effect, "if nothing else happens, the fact that people have responded so well to the book is just great... you just couldn’t ask for anything better than that."