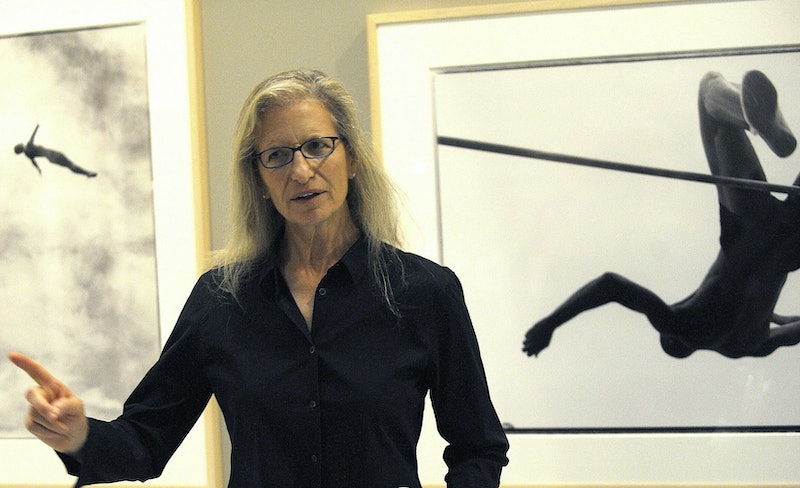 Today, for the first time, the world met Caitlyn Jenner, formerly known as Bruce Jenner, when she debuted for the first time in public on the cover of the July 2015 edition of Vanity Fair. Taken in Jenner’s home, the cover and accompanying images inside the magazine portray the reality star as confident and bold, shot with a healthy dose of old-Hollywood glamour. Behind the images is iconic photographer Annie Leibovitz, who has been widely celebrated for her work with magazines like Rolling Stone and Vanity Fair and who is, arguably, one of the most famous living photographers in the world.

You are probably already quite familiar with Leibovitz’s work, even if you don’t realize it. She was the lens behind the Kim Kardashian and Kanye West cover of Vogue last year, and she lit every sci-fi nerd’s heart aflame when her photos of the cast of the new Star Wars films appeared in Vanity Fair just this past month. In her 30+ year career, Leibovitz has photographed many of the world’s most famous celebrities, thinkers, and leaders, from Angelina Jolie, to Barack Obama, to Queen Elizabeth. In 1991, she became the first woman to have an exhibition at the National Portrait Gallery. Known for both intimate portraits and epic ensembles, Leibovitz’s photographs have often been groundbreaking, and, at times, controversial.

Caitlyn Jenner's Vanity Fair cover is far from the first groundbreaking and instantly iconic photo Leibovitz has taken over the course of her prolific career. Keep reading for seven of this amazing artist's most famous subjects and images:

On December 8, 1980, Leibovitz took this intimate portrait of John Lennon and Yoko Ono. She explains in Rolling Stone that, in its original conception, the photo was to feature both Lennon and Ono nude, but when Ono objected to taking off her clothes, the shoot had to change course. She recalls, “I was kinda disappointed, and I said, 'Just leave everything on.' We took one Polaroid, and the three of us knew it was profound right away." Shockingly, the photo shoot would prove to be the last of Lennon’s life: He was murdered later that night by a fan.

Leibovitz went on tour with the Rolling Stones as their tour photographer in 1975. The resulting images are visceral and kinetic. Leibovitz recalls in Vanity Fair that being so close to the band was dangerous:

At the time, I thought that the way to get the best work was to become a chameleon. To become so much a part of what was going on that no one would notice you were there. It was unbelievably stupid of me to pick that situation to become part of. I did everything you’re supposed to do when you go on tour with the Rolling Stones. It was the first time in my life that something took me over.

This 1991 photo of a heavily pregnant Demi Moore for Vanity Fair may seem rather tame now, but when the cover was first released, the image of the nude Moore caused quite a scandal. Leibovitz recalls in Vanity Fair,

Although Leibovitz is most famous for her portraits of celebrities, she has also done significant work that would more accurately fit under the heading of “reportage.” In 1993, Leibovitz traveled to conflict-ridden Sarajevo, which was under siege for more than 1400 days during the Bosnian War. Leibovitz has described witnessing mortar hitting a teenaged boy on a bike and killing him. The image above, titled Sarajevo , Fallen Bicycle of Teenage Boy Just Killed by a Sniper, documents the profound absence that comes out of war.

In 2007, Leibovitz was the first American to be asked to take an official portrait of Queen Elizabeth. Leibovitz recounts to Vanity Fair that the photo shoot became the root of controversy when the BBC claimed that the Queen had stormed out before shooting. Apparently, no such thing had happened at all, but the lie persisted. Eventually, the scandal became such a problem that the head of BBC One resigned.

This 2006 cover of a fully clothed Tom Ford alongside nude Scarlett Johansson and Keira Knightley courted controversy. Was it a beautiful portrait reminiscent of Manet’s Le Déjeuner sur l'herbe , or just another example of women being prized for solely their bodies (while men get to be famous with clothes on)?