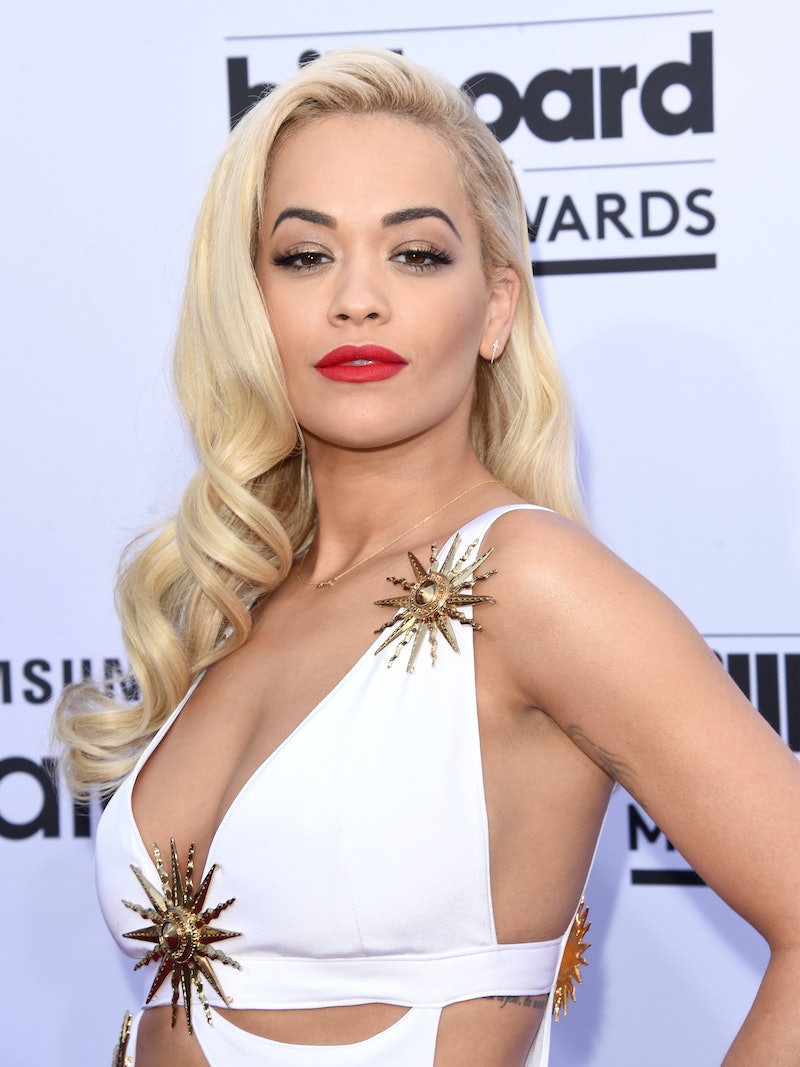 It's no secret that the red carpets of award ceremonies have long been spaces for, well, questionable ethics. But the 2015 Billboard Music Awards housed some delightful moments of body positivism. I'd be incredibly reluctant to say something like "long gone are the days when sexism ran rampant on the carpet and no one mentioned dieting or the 'thin is always better' mantra." But things are definitely improving. Just take a look at this year's Met Gala, where love for fuller figured booties was transparent and beautiful.

While there was some talk of dieting and a lot of abs-praising and one terribly awkward and not at all body pos moment between Giuliana Rancic and J. Lo during which Giuliana said, "My body is not this good," through the night's BBMAs, a handful of celebs and presenters did things right. There are so many layers to body positivity, from the most simple (every body is beautiful/every body deserves self-love/every body is worthy) to the more complex (our society has been crippled by the belief that only one type of body — and one way of existing — is right). And it fills me with a certain kind of pride that at tonight's awards — a ceremony filled with people who are no less victims of societal norms and constrains than the rest of us, but possibly more — a theme of worth and love and respect managed to shine through.

Body positivity isn't just about plus-size visibility (although that's a huge and important discussion, and one that has subsequently seemed to take the spotlight in body pos convos). Body positivity is about everyone. It's about embracing all the things we're conditioned to think are "wrong," "unacceptable," "outside the norm," "ugly," "flawed," and owning them with pride. Realizing that we are beautiful not despite the things supposedly wrong with us, but oftentimes because of them.

1. Laverne Cox Bringing On The Self Love

Thank goodness for Laverne Cox, one of the first celebs seen on the carpet this evening. In a powerful moment of self reflection and beautifully necessary vanity (because, you know, vanity can be pretty healthy), she recalled looking back at her Allure photo shoot, in which she posed nude, saying she “still hasn’t seen any [flaws]." "It’s all about embracing and loving things you might not always love about yourself." Amen. Trans visibility, like all visibility, is important. And Laverne fights for it every day.

J. Lo can always be counted on to remind us that baring your body on your own terms is nothing short of empowering. Visibility is crucial for all people, regardless of sexuality, race, size, or style. Although she's always been a curvier woman in an industry with a very narrow view of beauty, Lopez has never been afraid of showing her love and pride for her body. A body that allows her to do everything she wants and more.

3. Rita Ora Not Wearing Any Underwear

Seriously, guys. Going commando can also be rad and empowering in its own right. When a woman does so, it's often a statement against the many "rules" she's been conditioned to follow throughout her life. Rules tied to notions of propriety, modesty, of what's "OK" and "not OK" for "girls to do." Maybe Rita left the undies behind to avoid awkward panty lines with this gown, sure. But maybe there's a little more to it than that.

Body image issues and gender norms affect men too, of course. So seeing Pentatonix's Scott rocking this baby pink/coral leather jacket is the bomb. It's not a "threat" to his personal masculinity. It's not "wrong." It's just cool — as is any sign that humans are beginning to feel the power and right to express their individualities. In fact, all of the band members went a bit experimental with their wardrobes tonight (kind of the exact opposite of 1D, to be honest) and for men to feel able to go quirky sartorially is worth a little celebration.

This just in: No one should ever be made to feel guilty for or weird about eating . When asked by an interviewer about her diet (because obviously that's the quintessence of a woman's worth, guys), the 22-year-old singer/songwriter said she ate waffles today. Because waffles are delicious, people! And placing moral connotations on what we do/don't eat is bizarre and harmful. Women (and dudes) should be allowed to, you know, eat their IHOP in peace.

While accepting her award for "Top 100 Song" for "All About That Bass," Trainor said simply, "I just want everyone to learn to love themselves. And I'm glad this song is still working." Although "All About That Bass" could have possibly been more inclusive than it was, Trainor's intention was always been clear: To instill self love and confidence in every single human. That goal was very clear this evening.

Kelly Clarkson has, for as long as I can remember, been an advocate of self-love and body confidence. On stage at tonight's BBMAs, she performed emotionally and divinely. But knowing she is someone unafraid of shutting down fat shamers, acknowledging her awesomeness, or unapologetically loving her body, the person she is, and the messages she cares about made her performance all the more touching.