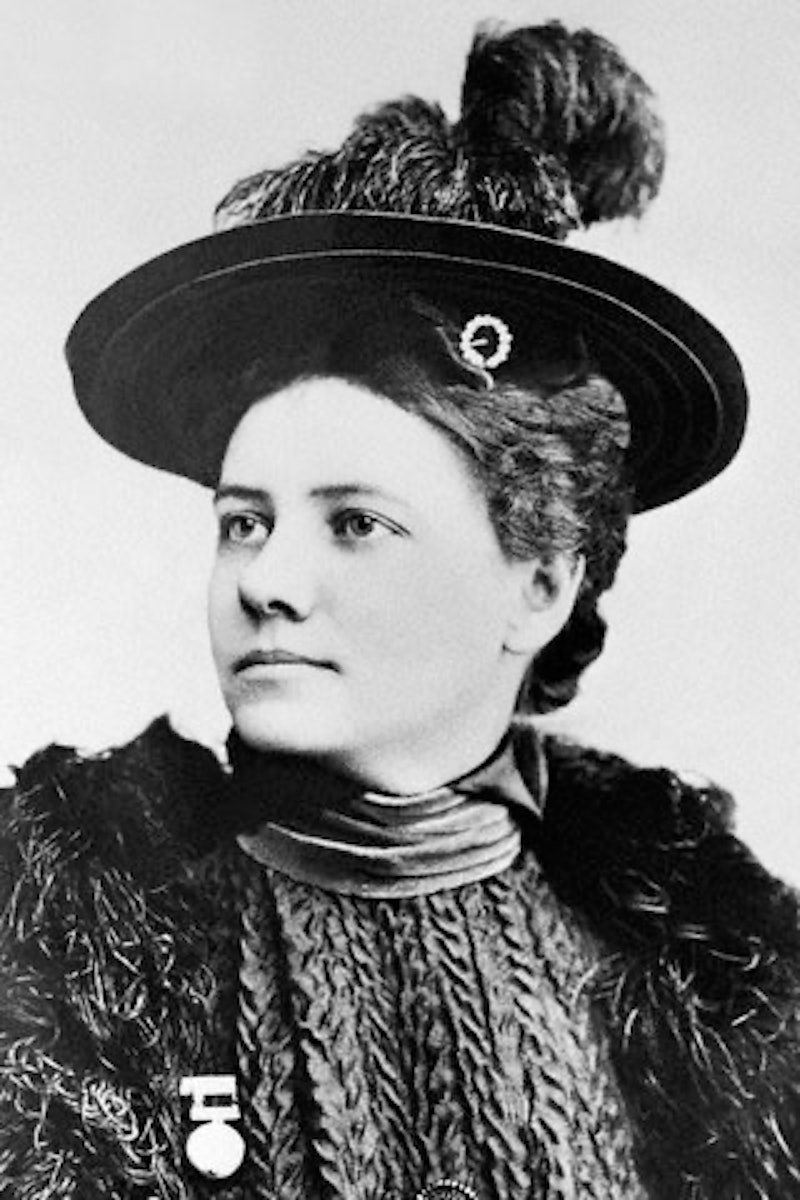 On November 14, 1889, journalist Nellie Bly launched her historic 72-day trip around the world. It was the first time anyone had attempted to live out the story of Phineas Logg, the protagonist in Jules Verne's Around the World in Eighty Days, and Bly swore she could do it in less time than slowpoke Logg. With just two days notice she jumped on a steamer leaving New York and began her nearly 25,000-mile voyage.

Unbeknownst to her until she reached Hong Kong, Bly was pegged for a race against another female journalist. On the same day, Cosmopolitan sent its reporter, Elizabeth Bisland, on her own voyage in the opposite direction around the globe. Bisland launched from New York and headed west. After Bisland missed a connecting flight, Bly was able to win by a margin of four days. We hope Bisland wasn't too bummed. (The big bummer is that the magazines felt they needed to pit women against each other, but alas, each got a trip around the world.)

Let's celebrate the spirit of the gutsy and articulate Nellie Bly (whose autonym was Elizabeth Jane Cochrane) by relishing in the wisdom of these kickass quotes:

1. "Accept praise for its worth — politeness. Be brutally frank with yourself. It's safer."

In other words, love and communicate with thyself (and maybe put a ring on your own finger).

2. "Could I pass a week in the insane ward at Blackwell's Island? I said I could and I would. And I did."

Sick of writing about the beats she was given on the "women's pages" at the Pittsburgh Dispatch, Bly got herself a reporting position at Joseph Pulitzer's newspaper, the New York World. She went undercover to investigate reports of brutality at the Women's Lunatic Asylum on Blackwell's Island. During her ten-day stay, which she documented in a series of articles compiled as Ten Days in a Mad-House , Bly unearthed the neglectful and abusive conditions at the ward, and in an ensuing trial, the Department of Public Charities and Corrections increased its budget by $850,000. THAT IS THE POWER OF THE PEN!

3. "Energy rightly applied can accomplish anything."

4. "'It is impossible for you to do it,' was the terrible verdict. 'In the first place you are a woman and would need a protector, and even if it were possible for you to travel alone you would need to carry so much baggage that it would detain you in making rapid changes. Besides you speak nothing but English, so there is no use talking about it; no one but a man can do this.'

'Very well,' I said angrily, 'Start the man, and I'll start the same day for some other newspaper and beat him.'"

From her book Around the World in 72 Days, Nelly shows those sexist folks what's up.

5. "Sports do not build character. They reveal it."

How timely! Take that, Richie Incognito.

6. "Never order food in excess of your body weight."

Very easy to remember, and a very helpful tip to recall at the deli! I would amend this, though, to allow exceptions for latkes.

7. "There is a thin line that separates laughter and pain, comedy and tragedy, humor and hurt."

And hopefully we can always trust Sarah Palin and her advocacy for Christmas to fall on the lighter side of things.

Thanks, Nellie Bly, for paving the way for the female journalists who are trail-making and trailblazing today.

More like this
How To Fight For Reproductive Rights, Based On How Much Time You Have
By Courtney Young
How To See The Lunar Eclipse On May 15-16, 2022
By Kaitlyn Wylde
Sandra Bullock, Girlboss Extraordinaire
By Matt Harkins & Viviana Olen
Twitter Was Saying The Same Thing About Sam Ryder’s Surprising Eurovision Result
By El Hunt
Get Even More From Bustle — Sign Up For The Newsletter