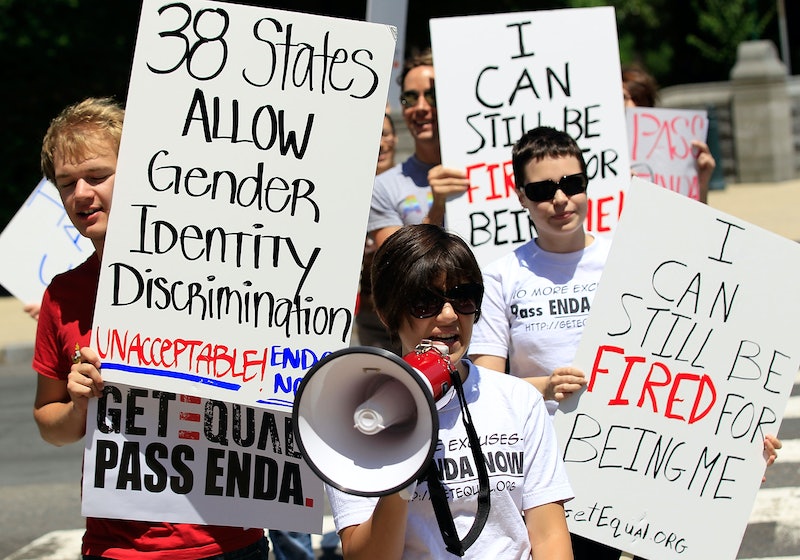 Yesterday Caitlyn Jenner broke the Internet when she made her first appearance on the cover of the July 2015 edition of Vanity Fair. Jenner’s decision to be out in the world as her authentic self is the inspiring culmination of a long and difficult personal journey. More broadly, it is also a major moment for the transgender community as a whole, for Jenner’s debut brings much needed visibility and awareness to a group of people who have often been, and who continue to be, marginalized by the public.

However, as S.E. Smith noted today in Bustle, as positive as Jenner’s public debut is for the trans community, it’s essential that we recognize Caitlyn Jenner’s privilege as a wealthy, white trans woman, as well as the fact that her story, though empowering and moving in its own right, is not representative of the experiences of all trans people. In an essay posted to Tumblr early this morning, Laverne Cox celebrated Jenner’s ­Vanity Fair cover and the outpouring of support that Jenner has received, but she also made the vital point that many trans people are still fighting an uphill battle when it comes to representation, acceptance, and basic civil rights. She writes,

Most trans folks don’t have the privileges Caitlyn and I have now have. It is those trans folks we must continue to lift up, get them access to healthcare, jobs, housing, safe streets, safe schools and homes for our young people. We must lift up the stories of those most at risk, statistically trans people of color who are poor and working class. … I hope, as I know Caitlyn does, that the love she is receiving can translate into changing hearts and minds about who all trans people are as well as shifting public policies to fully support the lives and well being of all of us.

We should applaud the fact that Jenner’s Vanity Fair cover, and Jenner herself, have received so much love and support from the media and the public, and, by all means, we should regard it as a step in the right direction. But it’s imperative that we don’t let the positivity of this event mask our understanding of the difficult realities that trans people face every day in the U.S. and around the world. The simple fact is that transgender people in the U.S. experience higher rates of violence than those who are cisgender; They face significant discrimination and are at increased risk of suicide. I don’t bring this up to rain on anyone’s parade, but to drive home exactly why advocating for the rights and acceptance of trans people and fighting against transphobia are so important. It is literally a life or death issue.

These are the facts:

Transgender people who are bullied, rejected, or discriminated against have a higher rate of suicide attempts. (And those who retain strong relationships with their families have a lower rate.)

A 2014 analysis of the National Transgender Discrimination Survey by the Williams Institute found that more than have of people who have been bullied at school due to anti-transgender bias had attempted suicide. Among people who experienced physical or sexual violence at school, a startling 78 percent reported having attempted suicide.

Among respondents who reported that their parents and/or families had stopped speaking or spending time with them after coming out as transgender, 57 percent had tried to end their lives. What is especially telling about this aspect of the survey is that people whose familial relationships had remained strong after they came out reported a significantly lower suicide attempt rate (33 percent).

A 2013 report from the National Coalition of Anti-Violence Programs (NCAVP) offered alarming statistics about violence against trans people, revealing that trans women of color to be especially at risk:

To put these numbers in perspective, consider that transgender survivors and victims only made up 13 percent of the total number of hate violence reports to the NCAVP that year. Only 13 percent – and yet trans women accounted for almost three-quarters of the year’s total hate violence fatalities.

The NCAVP survey found that trans survivors were 1.7 times more likely to be the victims of sexual violence than cisgender survivors.

In “Beyond Stereotypes: Poverty in the LGBT Community,” Brad Sears and Lee Badgett explain that transgender people are “four times as likely to have a household income under $10,000 and twice as likely to be unemployed” as most people in the U.S. Nearly a fifth of transgender people experience homelessness in their lifetimes, and 90 percent report having been discriminated against or harassed while on the job. Financial difficulties and housing insecurity puts many transgender people more at risk of violence, making it especially difficult for them to access necessary resources and protection.

Learn more at the NCAVP.