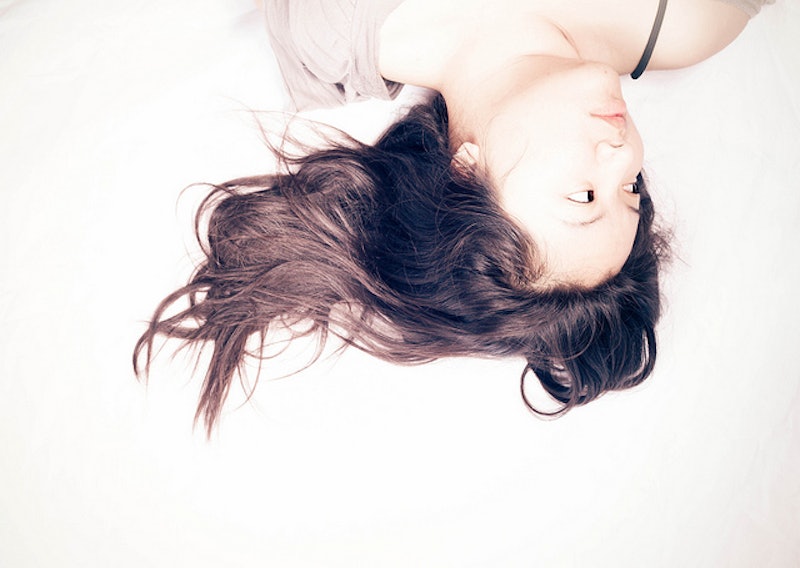 Periods can be so confusing to begin with, it's easy to get wrapped up in worrying about whether you have a normal period. But the odds are that you do — despite the party line that all periods run on 28 day cycles, last for five days, and follow a very specific heavy-to-light trajectory, the reality is that periods can vary wildly in length, heaviness, and even color, and still be perfectly healthy. In fact, these details can even vary from cycle-to-cycle for the same person.

However, there are a few situations where your period's quirks might mean more than just that it is the off-beat Zooey Deschanel of menstrual flows — times where certain changes to your period mean that you really do need to talk to your doctor. The biggest sign that something is amiss with your period is not any one particular specific symptom, but rather changes to your typical period — a sudden increase or decrease from your typical flow, or a previously short flow that now drags out for a week and a half.

That said, there are a few signs that can be related to health problems. If you experience any of the four period problems below, it might be nothing to worry about — but since they can sometimes also signal a real health issue, don't be embarrassed to go to your doctor about them.

Though it can feel like you're leaking gallons while it's happening, the average period actually only adds up to two or three tablespoons of blood a month. Some of us happen to possess naturally gushier wombs; those folks with a heavier period can lose five or six tablespoons of blood. If you've always had a very heavy period, there's no reason to panic — though you should make your doctor aware of your heavy flow, just so that they can monitor your iron levels, especially if you feel tired, weak, or look especially pale lately (iron-deficiency anemia can be tied to having a regular heavy flow).

When You Should Talk To A Doctor: If your heavy flow is new, or has been accompanied by other new symptoms, like pain during sex or frequent urination, you might want to chat with your doctor about it. A heavy flow can be a sign of uterine fibroids, or, on occasion, a sign of a more serious problem, like a blood-clotting disorder or cancer. Either way, it's good to let a professional know if you feel like you're drowning in your crimson tide.

Worrying Symptom #2: You're Spotting Between Periods

There are a lot of harmless reasons why you might be spotting in between periods — spotting is common among folks who've just gotten an IUD or started taking new birth control pills, as well as people who recently started menstruating. Some people spot when ovulating, and some women experience a form of light spotting called "implantation bleeding" when they conceive.

When You Should Talk To A Doctor: If none of these things apply to you, and you're still spotting, you may want to chat with a professional — spotting can be a sign of uterine fibroids or a slow thyroid (hypothyroidism), or even more serious problems, like an STI, a miscarriage, or cervical cancer. So make sure to take spotting seriously — and not just because it is messing up your nice linen pants (those look great, btw. New?).

Worrying Symptom #3: You're Not Getting A Period At All

If you're too young to be going through menopause or perimenopause (which can start in a woman's mid-30s, but typically begins in your 40s), your first thoughts following a missed period are probably pregnancy. And if you're heterosexual and sexually active, honestly, that's a very good guess. But even if you can pinpoint the exact night and amount of Kahlua that could have gotten you in a family way, make sure to take a pregnancy test with your doctor to confirm things — because there are actually a lot of other reasons that your period could quit on ya.

A missed visit from the bloody panties fairy could be related to hypothyroidism, a thyroid disorder that causes your bodily systems to slow down; it can also be linked to polycystic ovarian syndrome (especially if you're experiencing other symptoms, like pelvic pain or unusual hair growth). Sometimes we miss our period when we're phenomenally stressed out, too.

We can also miss our periods when we're neglecting our overall health. A missed period can be a sign of unhealthy weight loss — not eating enough can prevent your body from releasing the hormones needed to trigger ovulation. It can also be a sign of excessive exercise — when you work out intensely on the regular, your body can experience a phenomenon known as "exercise-induced amenorrhea," which means that the amount that you exercise has disrupted the flow of reproductive hormones in your body. Experts estimate that between five and 25 percent of serious female athletes experience exercise-induced amenorrhea, so if you think this could be the culprit, make sure to mention your training schedule to your doctor.

And though it is rare, some women who are too young to be experiencing perimenopause can still experience premature ovarian failure, which can lead to the early appearance of menopause-like symptoms.

When You Should Talk To A Doctor: Though these causes are all over the map, their common thread is that all of these problems can benefit from a doctor's attention — polycystic ovarian syndrome and hypothyroidism can be helped by medication and medical intervention, and if you're ultra-stressed or engaging in some unhealthy eating or exercise patterns, general practitioners can usually refer you to a mental health specialist who specializes in treating the kinds of problems you're experiencing.

Worrying Symptom #4: Your Period Is Ultra-Painful

Some of us are simply cursed with period cramps that feel like a colony of weasels is trying to tunnel out of your uterus. Those of us who are extra-crampy generally have bodies that produce an excess of prostaglandin, which is the chemical that signals to your uterus that it is time to contract and slough off its lining. More prostaglandin = more cramps (and, typically, more period diarrhea). It sucks, but it's not an actual medical problem.

When You Should Talk To A Doctor: If your periods have suddenly gotten more painful, however, it may be a sign of uterine fibroids or endometriosis, so talk to your doctor about it — they'll have ideas about how to treat your problem (and as a card-carrying member of the Painful Periods Club, I can definitively say that we don't need any extra members).

So if your period is acting shady, don't just ignore it and hope that it goes away on its own. If you see something weird in your uterus, say something (about the weird thing going on in your uterus).