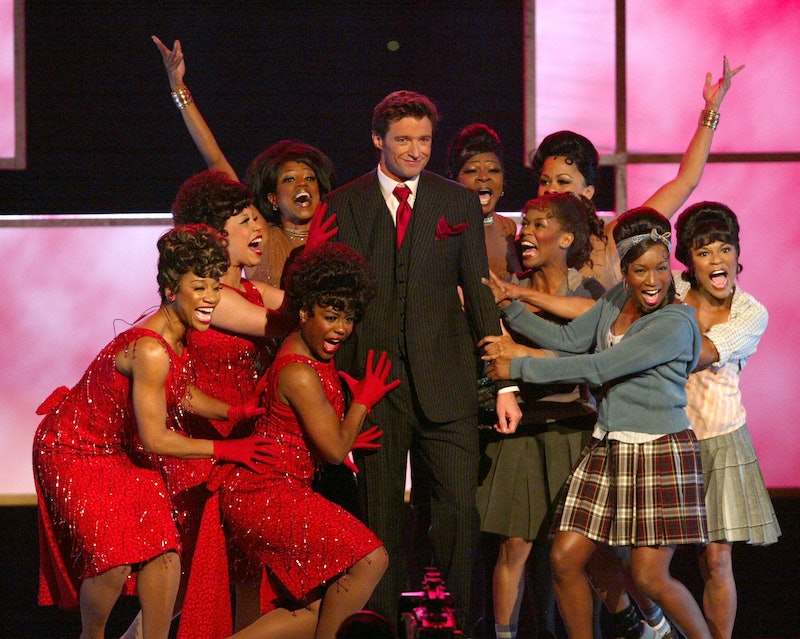 This Sunday, all the glitz and glamour of Broadway will be seen by the masses on American television. At least, they want you to think that it's glitzy and glamorous — sometimes the theatre is nothing but good lighting and razzle dazzle. Anyway, the 2015 Tony Awards are finally here. As it has done for decades, the ceremony is sure to provide us with quality performances, celebrity appearances, awkward moments, and inspiring acceptance speeches. What are some of the best moments from the Tony Awards over the years?

I could easily spend all day finding quality musical theatre-related clips to share on YouTube. There are some things that Broadway fans just know how to find. Chances are, a fellow craved theatre enthusiast like myself has taken a glimpse at Alice Ripley's delightfully nutty channel (more on her later), sat "Side by Side" with Susan Blackwell, and listened to different "Elphaba"s belt the same phrase over and over on a loop.

One of my personal favorite Tony Awards moments is the performance by the cast of The Wedding Singer, but for the life of me I can't justify why I love it so much. The Tony Awards are special, and the different performances and moments give us a glimpse into American theatre history that we wouldn't get otherwise. They represent the best. So, before we make some more memories on Sunday night, here are some of my top Tony moments from across the years:

Is that fear? It is pure, unadulterated joy and love of the theatre? I can't quite figure out the expression that Andrew Garfield is making during the "audience participation" at the 2012 Tony Awards, but I'm obsessed.

One year later, at the 2013 Tonys, this beautiful "tribute" medley to the grand tradition of stage actors moving to the small screen happened. Suck it, Will Chase!

Teenage boys everywhere won that day. Teenage girls everywhere were like "...and noooobody in all of Oz, no Wizard that there is or was is ever gonna bring me down!" Unnecessary gendering of past events aside, this upset win is the Broadway equivalent of when Shakespeare in Love beat Saving Private Ryan for Best Picture. Ask anyone.

This genius wins his first Tony Award (for In the Heights) and freestyle raps his acceptance speech. Who does that? It's also just the sweetest, most passionate, and moving speech. No joke, and this is incredibly dorky and something I've never told anyone before, I used to have a list of links to clips that would make me cry if I needed a good bawl session. This was one of them.

Also, if you're new to the Broadway scene, get used to this face. Lin-Manuel Miranda's newest musical Hamilton is getting an insane amount of awards, and it doesn't even hit the Broadway stage until July. He's also an Oscar away from EGOTing. No big deal.

Can you pin down the moment in which you started obsessing over a star? For me, and much of showtune-humming America, this was when we discovered Sutton Foster. She was unknown back then, and went on to star in basically every show on Broadway and two television shows.

The theatre may seem highbrow, but its stars never take themselves too seriously.

Sure, Seth Rudetsky's deconstruction may have given me a heightened appreciation for this silly song and Donna McKechnie's neck/limbs. Still, this is one heck of a dance number, and we're still talking about it more than Promises Promises — a musical adapted from the Billy Wilder film The Apartment.

Today, the cast of The Lion King is practically expected to break into song, theatre-kid style, whether they're on an express train or an airplane or just stuck in the airport with the cast of Aladdin . Back in 2008, this creative puppetry on Broadway was practically unheard of, and enchanted everyone in the way that it seems only Disney can. That year, director Julie Taymor was the first woman to win a Tony in that category — which was quite a wake up call for little old me, let me tell you.

Brett Michaels Gets Hit By A Drop in 2009

Live theatre at its live-est, everybody.

I will never forget this moment. Julia Roberts had her Broadway debut that year, and the show bombed. Is her little ad-lib here awkward, or awe-inspiring? You decide.

"And I Am Telling You" From Dreamgirls

I don't care how many divas you've heard belt this classic, there's nobody like Jennifer Holliday.

I remember this famous same-sex kiss well. It was 2003, I was in high school, and I'm pretty sure I had invited friends over to watch the Tony Awards with me in North Carolina. Boy, did we know what we were in for, and fast. The composing team is not responsible for Hairspray but also "Let Me Be Your Star" and other hits from Smash, as well as the viral Prop 8: The Musical.

As promised, here's a taste. The Next to Normal star got way into her speech in 2009 and we all loved it.

The Original Cast of Rent

I can't put the Spring Awakening cast up here and not include the original cast of Rent. Check out this clip from 1996, with some topical "stand-up" from Nathan Lane as a bonus.