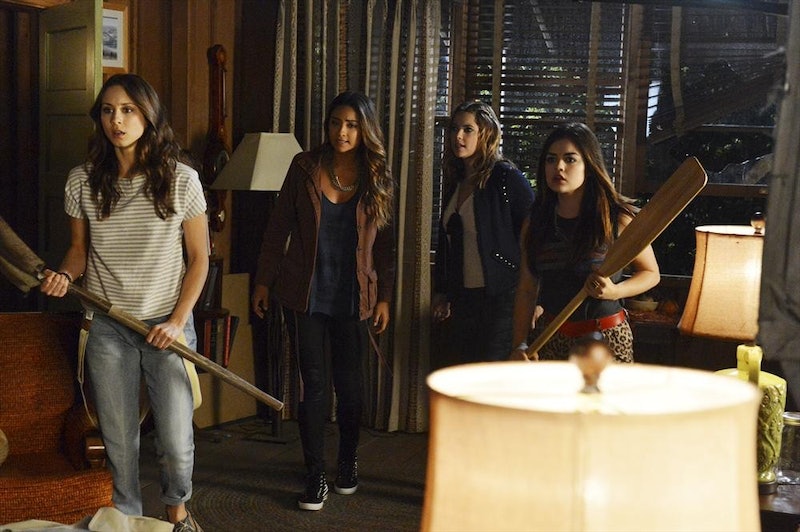 We're coming to the end of our Big A story on Pretty Little Liars, which means that all of the questions we've had about who A is will finally be answered. As fans know, A's tale really started after someone stole the game away from Mona at the end of Season 2, which means that we have Seasons 3, 4, and 5 to dive back into in order to pick up as many clues as possible before the Season 6 midseason finale. All will be revealed in the episode, titled "Game Over, Charles," but that doesn't mean we have to wait until then to try and put all of the pieces together. Bustle's writers have worked tirelessly to find Pretty Little Liars clues about A's identity clues across the show's history, particularly in Season 4 of the series, and some of the stuff that they found is absolutely mind blowing.

There have been well over 100 episodes of Pretty Little Liars, so it's hard to remember each and every clue that the writers give us across even just one season. That doesn't mean that they aren't there — as writer Maya Goldsmith told Bustle, every little clue the writers incorporate into the show matters. So what did the Bustle team find from Season 4? You might want to check your A suspect list again...

Ahh, yes — Dr. Kingston. We know hardly anything about him, and yet he keeps popping up in the girls' lives at the most bizarre times. In the episode "The Mirror Has Two Faces," we see Wren coloring in this woman's jacket with a red marker, and it looks just like the red coat that Ali wears as Vivian Darkbloom. That's not the weirdest part: the scene also depicts a happy family on a farm. Charles' home movies are of a happy family on a farm. Then there's this:

Wren says this to Spencer, and though he's referring to marrying Melissa, the Charles thing does make me give this statement pause. If Charles really is Jason's twin, that would make Spencer his half-sister. Could Wren secretly be referring to the fact that had he not "made a mess of things," he would be Spencer's actual brother, and not brother-in-law?

Does This Hand Belong To Charles?

Mad props to writer Rachel Paige for catching this one. In "The Mirror Has To Faces" we see this photograph of Mrs. DiLaurentis and Ali when Ali was a young girl. They're looking at someone just off camera who is reaching to pick up a ball, yet the photo is cut off save for a hand. It can't be a coincidence, because if the writers had no intention with the photo, they would have just cropped that hand out. Could the person cut out of this photo be Charles? It certainly seems likely.

This Hints To The Kidnapping

This message appears in the Season 4 episode "Who's In The Box?" Charles wanted a version of Ali for his dollhouse, so he kidnapped Sara Harvey. This A message pretty much proves that A wanted to kidnap (but not necessarily kill) the girls all along.

Did Melissa Know About Charles?

This confession to Spencer in the Season 4 episode "Face Time" could refer to the fact that Melissa buried a person she assumed her sister had killed, but it could also be referring to something even bigger. After all, Melissa says "before it started," which could mean that she knew about Charles long before Ali ever went missing. Melissa might have known who was after the girls this entire time.

Who Does Mrs. DiLaurentis Give Clothes To?

There are a ton of clues to mine from in Season 4 — now we just have to see how they all fit together.