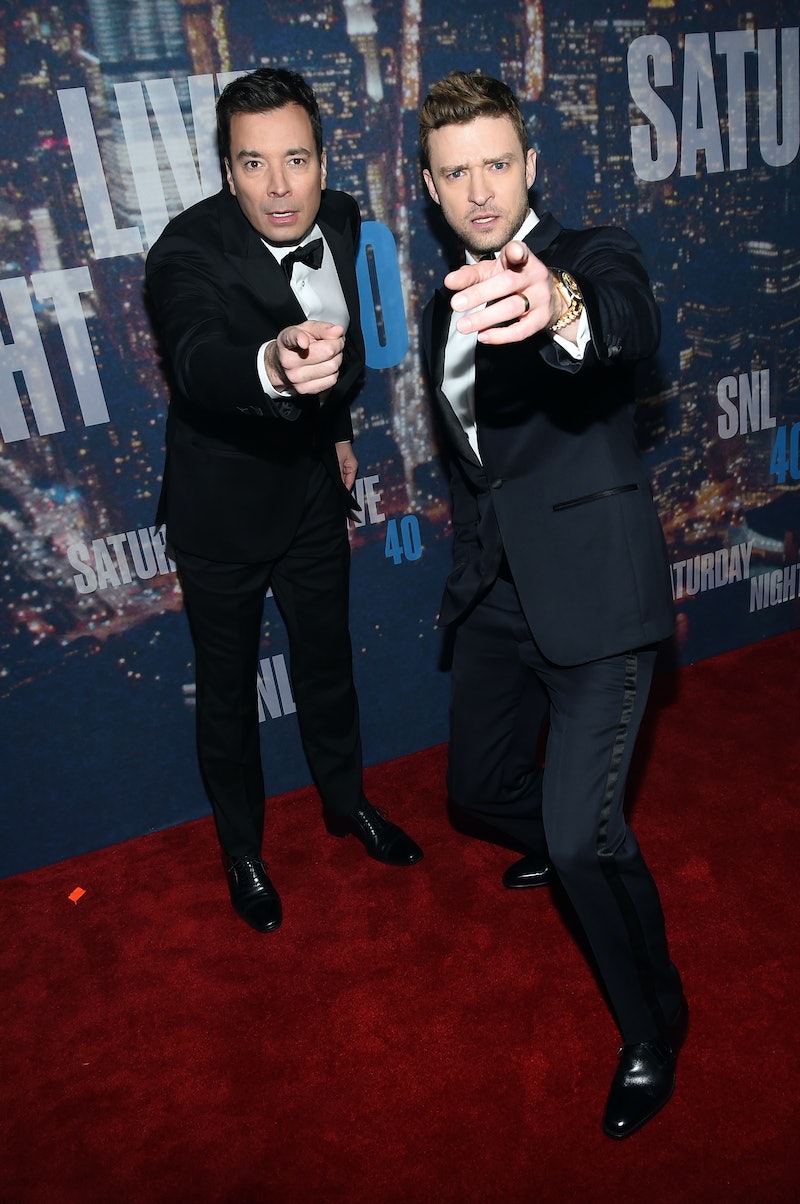 Isn't it bromantic? I'm speaking, of course, about the epic bromance/friendship that exists between Jimmy Fallon and Justin Timberlake. Today, June 8, is National Best Friends Day, which is perfect cause to celebrate Fallon and Timberlake's super adorbs comradery — then again, do we even need a reason to talk about these two? Timberlake and Fallon's friendship began over a decade ago when Timberlake proved that he had some killer comedy chops to pair alongside his musical acumen after first nailing it as a Saturday Night Live host and subsequently becoming a semi-regular fixture as part of ongoing sketches, including some sidesplitting duets with Andy Samburg's group, The Lonely Island.

Fallon exited SNL in 2004, but his career shift didn't quell his bromance with Timberlake — far from it! Fallon has returned to host SNL a few times, one of those being a time with Timberlake in tow as a musical guest and cohort to some of the duo's hilarious sketches. As host of The Tonight Show, Timberlake is a frequent guest and partaker in the addictive late night talk show's bits. There's no denying it: these two have one of the best — if not the best — bromance in entertainment. In order to pay tribute to this talented twosome and National Best Friends Day, let's take a look at some of Fallon and Timberlake's most bromantic moments.

At the beginning of Fallon and Timberlake's road to becoming besties was their early SNL sketches, one of those being "The Barry Gibb Talk Show". The bit was so popular, it became one of SNL's ongoing sketches and even at the onset we could tell that these two had a special brotherly love. Aww!

They're Always In Sync

The minute I typed "in sync" I had an immediate urge to lay down some *NSYNC puns. You know, because "in sync" and "*NSYNC" sort of sound the sa — nevermind! We can wax poetic about my favorite boy band of all time a different day, but it's all about Fallon and Timberlake in this post. Anyway, Fallon and Timberlake proved themselves to be totally in sync with each other during their SNL sketches, as was the case with their "Wrappingville" sketch.

One of my absolute favorite Tonight Show sketches is "Real People, Fake Arms" where Fallon and celebrity guests show clips from a faux soap opera where all actors are required to sport mannequin arms while performing a variety of tasks. When Timberlake guested in this sketch along with actor/awesome person Steve Carrell, he actually channeled his inner Fallon by nearly cracking up midway through the sketch. You know you're besties when both of you start acting alike.

Friends who #hashtag together, stay together, amiright? Seriously though, how cute is this? I can't.

When Timberlake Did The Best Fallon Impression EVER

When Fallon hosted SNL's last episode of 2013 — with Timberlake as musical guest, of course — Timberlake delivered a hilariously on point impression of Fallon during a "Family Feud" sketch. As if the skit could get any better, both Fallon and Timberlake took turns breaking character. So good, right? SO. GOOD.

Their SNL 40th Anniversary Cold Open Was Everything

Fallon and Timberlake managed to pay homage to SNL's most popular bits — via a song and dance number, mind you — in five minutes during the cold open for the show's 40th anniversary special. Rachel Dratch and Molly Shannon punctuated the performance as Debbie Downer and Mary Katherine Gallagher, respectively. It really doesn't get much better than that.