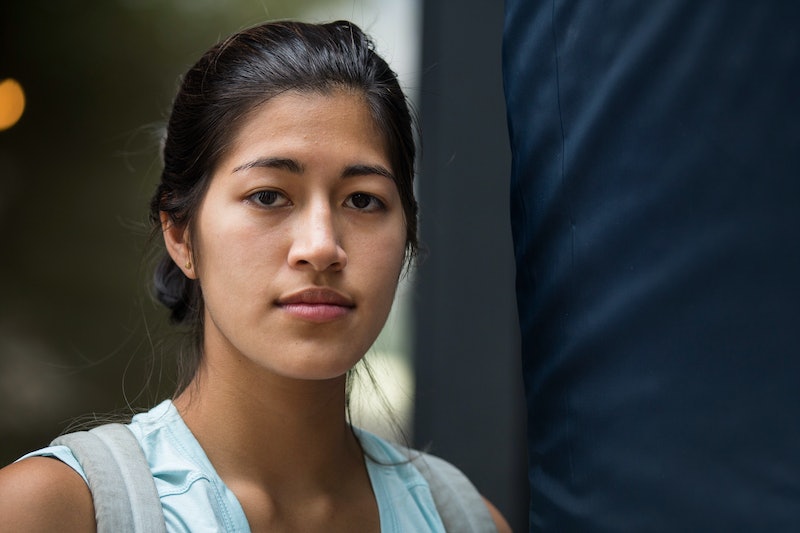 Last week, Emma Sulkowicz's "Ceci N’est Pas un Viol" art project — a title which translates from French to "This is Not a Rape" — sent the Internet into uproar. Commenter after commenter claimed the project was evidence of Sulkowicz suffering from mental illness; some took the opportunity to critique her physical appearance; and many even went as far as to claim that it illustrated the incompetence of women. Others were incensed over Sulkowicz's previous art piece, "Carry That Weight/Mattress Performance," in which she carried a mattress through college and even graduation to represent the burden she shouldered after an alleged rape by a classmate; the accused classmate, Paul Nungesser, claims the accusations were false. On Thursday, the opposition reached a breaking point: The "Ceci N’est Pas un Viol" site experienced a denial of service attack, in which hackers try to force a website offline, according to Keith Anderson, platform support lead at DigitalOcean, where the site is hosted.

Do not watch this video if your motives would upset me, my desires are unclear to you, or my nuances are indecipherable... Please, don't participate in my rape. Watch kindly.

This is the point of the project that so many viewers missed. Sulkowicz's permission for the viewer to watch the video is a metaphor for sexual consent. The video is available to her audience, as she was to her alleged rapist in her dorm room, and the only thing stopping the audience of her project (as well as her rapist) from violating her boundaries is respect for them. Both situations start off consensual (viewing a website; engaging in a consensual sexual encounter that appears to turn violent) but require reevaluation before proceeding to a new activity.

One commenter, who goes by JC, had another fascinating interpretation of "Ceci N’est Pas un Viol":

It is a brilliant representation of the dichotomy that exists between consensual BDSM and rape... the problem with today's pervasive rape culture is that that at any given moment in time, aggressive, and even violent sexual activity can occur between two consenting adults in a trusting environment who derive pleasure from such role play while the same exact scenario that occurs without such trust and consent is illegal, immoral, and can cause irreparable psychological damage. Similarly, a non-violent scenario between two individuals where there is coercion, persuasion, or incapacitation of one or both parties due to alcohol or other drugs can be more akin to rape then the consensual "disturbing" activity revealed in this performance art.

While it is possible that Sulkowicz's alleged rapist has become infamous without sufficient evidence of the crime — Nungesser has not been found guilty of the accusations — the opposition to Sulkowicz, "Carry That Weight," and "Ceci N’est Pas un Viol" has gone well beyond disagreement to harassment and silencing. Efforts to defame Sulkowicz and ultimately bring the piece down have been extremely gendered, similarly to the way #GamerGate and many other attacks on statements made by women have been. Along with the comments about how Sulkowicz and other women should "get back in the kitchen," the responses assessing Sulkowicz's appearance reappropriate her political use of her body for the male gaze. In this way, putting the video on Pornhub was just as violent as taking down the "Ceci N'est Pas un Viol" website.

People have called Sulkowicz many things: a “Pretty Little Liar,” a slut, a symbol of rape on college campuses. But regardless of the particularities of her alleged assault, I believe she deserves the title of "artist." Because though, as a Twitter troll kindly pointed out to me, her work does not resemble Rembrandt, it gets people thinking about consent. And I think this is brave — because her cyberattack doesn't even begin to encompass the hostility she has faced in service of this mission.