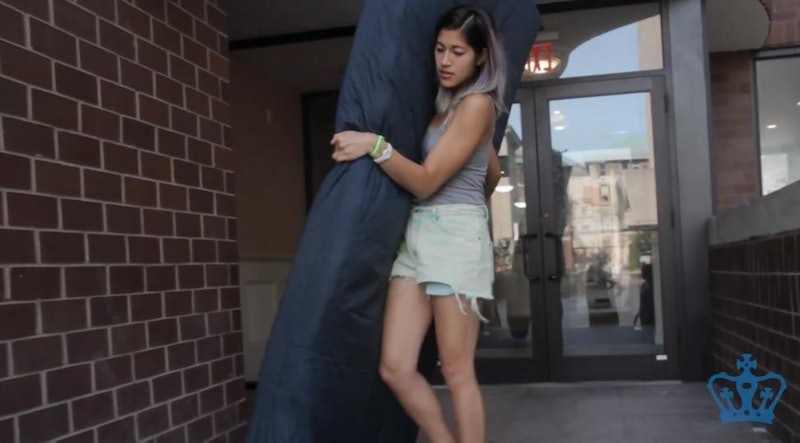 Emma Sulkowicz is not one to keep quiet. In fact, the Columbia University senior has done quite the opposite by being at the forefront of the recent campaign against sexual assault on college campuses. And she's done it all by taking performance art to a new level.

Since her alleged rape in her dorm bedroom two years ago, Sulkowicz has spoken to various news outlets across the country. She appeared in a news conference with Senator Kirsten Gillibrand and joined 23 students from Barnard and Columbia in filing federal complaints against the University, alleging violations of Title IX, Title II, and the Cleary Act. She has also shared her experience of reporting her attack to the police and the gross mistreatment she faced from NYPD officers in the process. And yet the person Sulkowicz says is her rapist — but who was found “not responsible” by the University’s disciplinary panel and was not arrested by the police — remains on campus.

During the hearing, Sulkowicz says she lost friends who didn't "understand what it means to be raped," including one friend who responded to the possibility that her accused rapist might be expelled by expressing sympathy for him, saying "Poor guy." After the panel proceedings, Sulkowicz appealed her case. Her appeal went to the dean, "who basically has the autonomy to make the final decision for every case of sexual assault on campus," and was shut down.

When I watch her carry that blue dorm room mattress, I feel the weight of my own assault, which is an invisible burden I carry with me wherever I go.

Since going public with her story, Emma has been accused in online comments of falsely alleging rape (the commenters say the sex was consensual) and criticized for telling her side of the story at all. Ever since her alleged rapist was found to be not guilty — despite the fact that two other female students have also accused him of rape — Emma has seen him on campus, including in the small space of a dark room in the University's photography department.

Now a senior at Columbia, Emma is transforming her assault into art. For her visual arts thesis, she will be carrying a dorm room mattress with her wherever she goes, as long as she and her rapist attend the same school. The act of carrying a mattress holds specific meaning for Emma. As she explained in an interview with The Columbia Daily Spectator,

I was raped in my own dorm bed…I feel like I’ve carried the weight of what happened there with me everywhere since then. A mattress is the perfect size for me to just be able to carry it enough that I can continue with my day, but also heavy enough that I have to continually struggle with it.

Emma’s “endurance performance arts piece” is not only a form of artistic expression, but also a powerful form of protest. “Carry That Weight” could continue on until Emma’s graduation, or it could end in a day. It all depends on whether Columbia University takes action against her alleged rapist or not. “The administration can end the piece, by expelling him, or he can, by leaving campus,” Sulkowicz says.

If and when Columbia’s administration will respond remains to be seen. But Sulkowicz ’s activism is already at work. On Thursday, an editorial from The Columbia Daily Spectator called for members of the University community to “Help carry the weight together,” both literally and figuratively.

One of the rules of engagement for the performance piece is that Sulkowicz cannot ask for help from others, but she can accept help if someone offers it to her. Students are not only rallying behind Sulkowicz and her protest, but also helping her carry the weight “as an act of solidarity with the countless survivors of sexual assault” in the Columbia community and as a protest against the University administration’s policies handling for sexual assault. A website called Carrying the Weight Together is being used to help facilitate "collective carries," so that student groups and members of the University body can help Sulkowicz carry her mattress every day.

Sulkowicz launched her project in a year that has seen more than its fair share of activism, from protests turned violent in Ferguson to more recent marches in Staten Island. Yet there have also been more peaceful forms of protest, which are perhaps less volatile but send just as strong of a message. This performance arts piece screams for justice through the simple of act of carrying a dorm room mattress, a physical manifestation of the artist’s own assault, into a university classroom. The personal truly is political.

For me personally, as a Barnard alumna and as a fellow survivor of (non-sexual) assault, Columbia University’s lackluster and indifferent response to the needs of student survivors of sexual assault has been infuriating to watch. But Sulkowicz ’s performance arts piece holds an even more significant meaning for me.

“Mattress Performance/Carry That Weight” is a reminder that the ramifications of violence are never ending. Violence, in all of its forms, is not something that you can simply “forget about," or “move on from," or "just get over." It becomes a part of who you are, and the memory of an assault becomes a burden you have to carry with you wherever you go. And for those of us who report an assault to the police, the process tends to be a long and painful one, with victim blaming and slut shaming being commonplace. Posttraumatic stress, fear, anxiety, and the paranoia of being attacked again are daily challenges for survivors of assault. Dealing with these things can be more excruciating and traumatic than the attack itself.

In many ways, Sulkowicz is a symbol for all survivors of sexual assault and violence. When I think about her perpetrator walking freely on College Walk, I am reminded of the 97 percent of rapists who roam our streets without spending a single day in prison for their crimes. When I watch her carry that blue dorm room mattress, I feel the weight of my own assault, which is an invisible burden I carry with me wherever I go. When I see Emma struggle with the weight of the mattress and unable to ask for help, I think of all of us survivors who can't talk about our assaults or ask for help because people just won't and can't understand what we're going through. When I see her taking her private, guarded life out into the open (where she can be judged freely by the public), I understand how much courage it took for her to be vulnerable and share her story. And when I hear and see criticism and accusations against her, I think of all the times people criticized, accused, and blamed me when I went to report and write about my attack.

Emma's art is the perfect metaphor for the experience of being a victim of sexual assault, which is something that is both difficult to understand and articulate. And perhaps this is exactly what makes Emma’s performance and protest so poignant, and thereby incredibly powerful. “Carry That Weight” takes a huge step in helping other people understand what it’s like to experience an assault, and it’s something that survivors like myself can strongly identify with.

Art has always been used to express things words can't. Survivors like Emma have loudly and repeatedly voiced their concerns with how universities handle sexual assault cases. It’s no surprise then, that Emma Sulkowicz is using her art to speak out once again. And with so many voices joining in the chorus, it’s time for Columbia University to unplug their ears and finally listen.