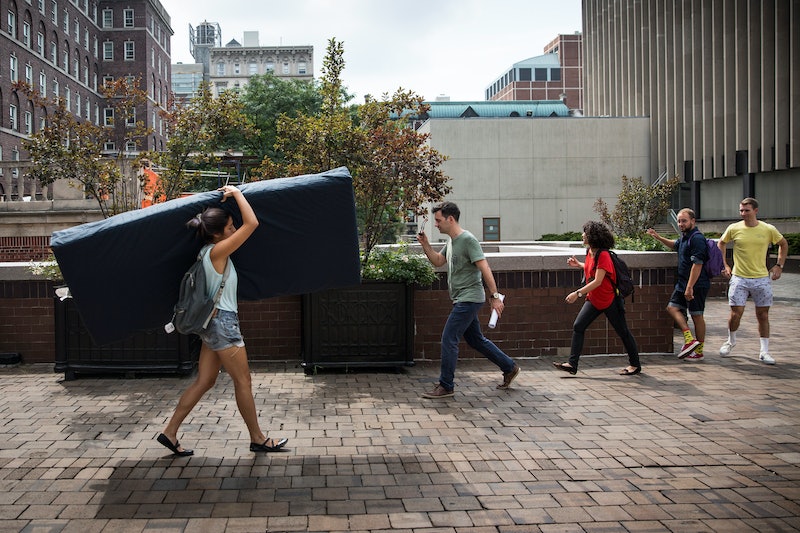 For her visual arts thesis “Mattress Performance/Carry That Weight,” Columbia senior Emma Sulkowicz vowed to carry a dorm mattress around for as long as the man she accused of rape remained at Columbia University. Last year, she told the Columbia Daily Spectator that it “could potentially take a day… or it could go on until I graduate." Her latter prediction came true, with her alleged rapist Paul Nungesser graduating alongside her — but along with Nungesser, who claims to have been falsely accused, Sulkowicz also shared the stage with her famous mattress, as well as many other students who supported her by helping her shoulder its literal and symbolic weight.

Sulkowicz claims that she was raped by Nungesser in her sophomore-year dorm room. She reported the alleged assault to the police, but, as the New York Times reported, didn't follow through on it. She says that the police kept Nungesser's name on record in case he is accused again; the police have not commented. Along with two other students who also claimed they had suffered sexual assault at the hands of Nungesser, Sulkowicz complained to Columbia's Office of Gender-Based and Sexual Misconduct, which temporarily restricted his access to campus buildings; ultimately, though, all charges were dropped. Nungesser claims that these other accusations are false, as well.

Since Sulkowicz felt law enforcement and Columbia's administration weren't listening to her and other women's reports, she decided to speak up in a different way. She has been spotted around Columbia's campus since last fall with her mattress, which represents the emotional weight she constantly carries and the now-public status of the trauma she says she suffered in private. Through the project, Sulkowicz has brought attention to the inadequate handling of sexual assaults throughout college campuses.

Photos from Columbia's graduation ceremony this morning show other members of Sulkowicz's graduating class helping her "carry the weight" around campus and across the stage.

Photos like these provide a glimmer of hope against a backdrop of hostility toward Sulkowicz and sexual assault survivors. (If you don't know what I'm referring to, read the replies to these tweets — but be warned: They're not kind.)

Columbia Spectator Deputy News Editor Teo Armus, who live-tweeted the ceremony, also shared a photo of Sulkowicz walking past Columbia President Lee Bollinger without shaking his hand. Sulkowicz told The New York Times that this was Bollinger's decision: “I even tried to smile at him or look him in the eye, and he completely turned away,” she said. However, a spokesperson for Columbia suggested the opposite — that Sulkowicz and the other students carrying the mattress walked past Bollinger, perhaps to protest how her case was handled.

Last October, hundreds of students left 28 mattresses outside Bollinger's home, each representing a student who had filed a Title IX complaint against Columbia like Sulkowicz. "All of us here have our eyes on you," Sulkowicz addressed Bollinger during the protest. "Do something. We are waiting." To this day, sexual assault victims who feel they have been ignored at the hands of schools across the country are still waiting, and Sulkowicz refused to let Bollinger off the hook for what she felt was the inaction that allowed Nungesser to also walk across the stage.

Nungesser filed a lawsuit against Columbia last month for what he claims is the defamation he incurred at the hands of Sulkowicz, whom he says in the lawsuit falsely accused him and concocted her project as a revenge tactic geared toward getting him kicked out of school.

Although it may be possible that Nungesser is a victim too, Sulkowicz's devotion to her protest in the face of opposition is inspiring — as are the students helping survivors at Columbia and campuses around the country carry the weight of sexual assault and the additional weight piled on by systems that don't believe them.