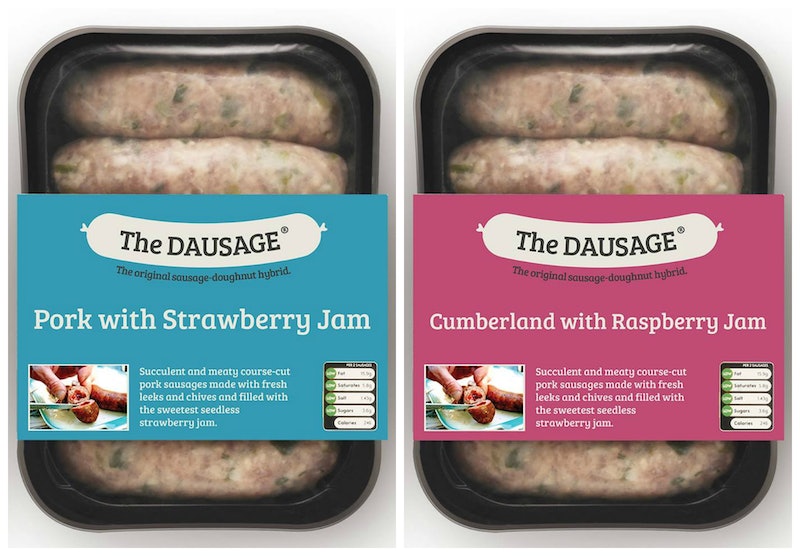 Although it seemed like last year's parade of hybrid pastries inspired by Dominique Ansel's cronut would never end, the stream did eventually slow to a trickle. In case you thought that it had actually stopped, though, think again: The Dausage is here, and it's basically a donut made of sausage. I don't know about you, but I'm having kind of complicated feelings about it, even though we're unlikely to see it in the U.S. anytime soon. Here's the deal.

Created by Liam Bennett of Garnant, Ammanford in Wales, the jam-filled sausage took its inspiration from the infamous cronut — although possibly not in the way you think. You see, there's no actual pastry involved in the Dausage; rather, the sausage takes the place of the pastry, so instead of a ball of fried or baked dough filled with jammy deliciousness, it's a ball — well, a log, really — of sausage filled with jammy deliciousness. The cronut inspiration came not in the form of combing two pastries into a hybrid, but taking a food that isn't typically a pastry and making it shaped like one… all of which, admittedly, sounds kind of convoluted, but I get what he's going for.

According to Wales Online, Bennett spent an entire year developing the Dausage, wracking his brain for what other sorts of foodstuffs could be improved by the addition of a jammy center. He started simple, pairing pork sausage with strawberry jam and Cumberland sausage with raspberry; further ideas came from a “Design-A-Dausage” competition he held on Facebook last November. The winner of the competition was the Christmas Dausage, which consists of pork sausage filled with mulled jam and wrapped in bacon.

But… I don't know, guys. I'm not totally convinced. I mean, it's not that savory foods and sweet jams can't go well together; on the contrary, putting jam inside a grilled cheese, for example, is one of the single greatest sandwich hacks in existence. And it's not even that meat specifically and jam can't go well together, either — plenty of meat-based dishes employ fruit, sweet glazes, or even fruity, sweet glazes, so duh, of course meat and jam work fine together. For me, though, the idea of meat filled with jam… is a little incongruent. I'm just not a food I expect to have a jammy center, so I feel like I might have some mouthfeel issues with it. Also, I just keep thinking about this extremely particular moment from Game of Thrones:

Maybe that's just me though.

In any event, the plan from here on out is to take the Dausage around Wales' food festivals as Bennett both works on figuring out how to mass produce the stuffed sausages and finding a retailer to sell them once he does. Next stop: Crowdfunding. Bennett recently started a Dausage Kickstarter campaign to fund the creation of a large-scale jam injector system (which is not a phrase I ever thought I'd type, but, well... there you have it); he's got until June 30 to hit his goal of £2,500, or about $3,839.

More like this
10 Pumpkin Recipes That Are Way More Creative Than Pie & Lattes
By Rebecca Deczynski and Alexis Morillo
TikTok's Butter Board Might Be The New Cheese Plate
By Emma Carey
On TikTok, Tinned Fish Date Night Is The Latest Viral Food Obsession
By Emma Carey
Deliveroo Is Selling Lotus Biscoff Cinnabons Now
By Darshita Goyal
Get Even More From Bustle — Sign Up For The Newsletter