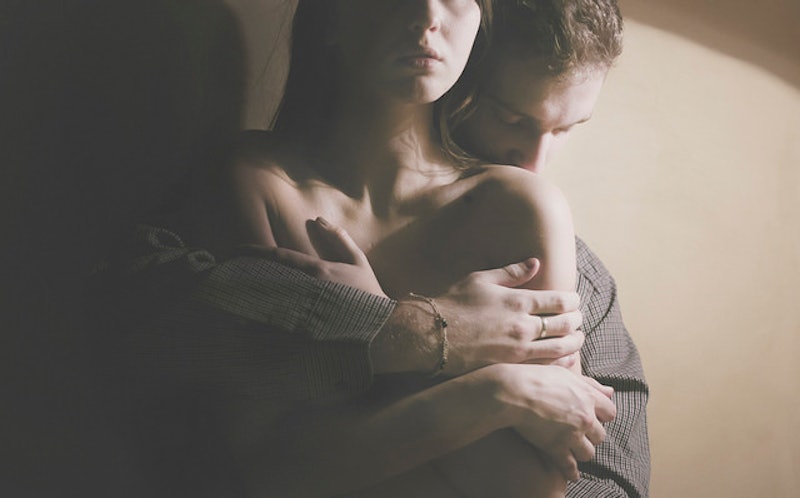 Our bodies commit all manner of terrifying functions on a day-to-day basis. From foul odors to strange noises to questionable secretions, the human body can get pretty disgusting and messy. Alas, we don't automatically shut down these bodily functions during ~intimate~ moments, and as a result, there are plenty of weird things that happen during sex. Being naked with someone is an extremely vulnerable experience, particularly if you're just getting to know them, so it's understandable if you're nervous that something embarrassing might happen during a romp in the sheets. But a mature man understands (and embraces) that women aren't delicate little flowers, and our bodies sometimes do gross things, too.

News flash: Women are humans, and although we may not discuss our bodily functions aloud as much as men (though some of us do, because why not?), it doesn't mean we don't experience them. A man shouldn't have to read that children's book Everyone Poops in order to be aware that women — surprise! — pee, burp, and fart just like everyone else. If you're in bed with a guy, you should feel 100 percent confident that you won't be judged in case something not ~traditionally sexy~ occurs. No one wants to be shamed or laughed at during sex, so all men need to grow their asses up and get with the non-body-shaming times. Here are 10 things that might happen during sex that every adult (man or woman) should be comfortable with:

In case you decided Taco Bell for dinner was a good idea, don't fret — farting during sex is all too common, and if a guy can't deal with that, why are you sleeping with him in the first place? Sometimes your bowels get all rattled while you're being thrown around and penetrated; it's not a crime if your body lets slip some gas during all that commotion. Even if you accidentally poop a little, a mature man will understand that you might be embarrassed, and comfort you rather than make you feel even worse.

It's a tale as old as time: You're getting it on, some air bubbles are formed in your vagina, and next thing you know, a queef happens. No need to be alarmed, though: Any guy worth having sex with knows that some vaginal air never hurt anybody, and he won't even bat an eyelash at your "embarrassing" moment.

I recently had an unfortunate experience where a condom mysteriously disappeared during sex and then surprised me TWO WHOLE DAYS LATER by falling out of my vagina while I peed. Lovely, right? Even though it was shocking, when I told the guy who'd, umm, buried the condom up there, he found it hilarious rather than disgusting. Wanna know why? Because he's an adult.

These things go hand in hand, IMHO. Particularly if you've been drinking, getting the hiccups/burps is extremely likely during sex, but that doesn't mean it's gross. If you have to pause to go throw up a little, that's your business. Just brush your teeth and reconvene, and both you and your guy should be good to go. (If you throw up on him, apologies might be in order, but he still shouldn't make you feel bad about it.)

Spoiler alert: Women bleed from their uterus once a month, and sometimes we can't predict when exactly that will happen. If a guy isn't down with period sex, he's probably pretty immature; it's perfectly natural, and sometimes period sex even feels better for women. Even if you're not on your period, forceful penetration can cause light bleeding, but that's no cause for alarm. If you or your partner are really concerned, just throw down a towel and get back to business.

You're supposed to sweat during sex, people! Unless you're lying there like a dead fish, there's no way in hell that things aren't gonna get a little moist. A grown man will want to bang before, during, and after you get all sweaty, because natural musk is sexy between the sheets.

This has definitely happened to me: I've been having some great sex and before I finish, it's over, leaving my body feeling like a weird tension-filled ball of emotion. I'm not sad, but my body decides that crying would be a great way to relieve all this built-up tension. It's not the ideal kind of release, but hey, whatever works. Some people even cry after orgasm, and that's okay, too!

There's nothing wrong with having less-than-minty-fresh breath when you first wake up. If you're sensitive about it, you can go brush your chompers before engaging in some steamy morning sex, but if you choose not to, your partner should be mature enough to handle a little bad breath. It's a small price to pay for an orgasm, if you ask me.

This isn't a bodily function, but it's still something that might "gross out" a less mature guy. Cuddling is amazing, and if a guy won't snuggle up with me after a sex sesh, he's getting the boot ASAP — it's non-negotiable.