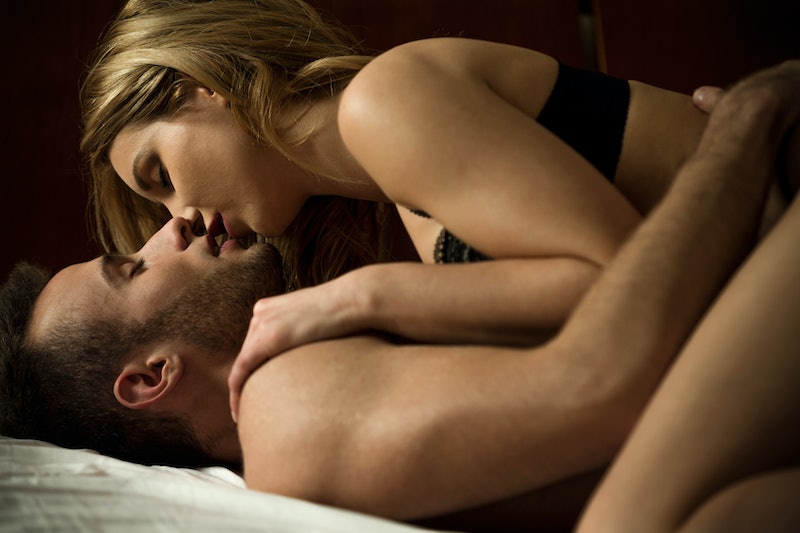 For women, the stigma against sex toys is waning, but for guys? Not so much. According to The Independent, sales of sex toys for men have risen over 1,000 percent in the past decade — with cock rings and The Fleshlight topping the list of most popular toys — but many male users still face prejudice from their peers and partners.

The prevailing stereotype of the guy who loves sex toys is the creep with the blow up doll in his basement, but a 2014 sex toy survey by FHM found that 70 percent of men felt that they should be able to use a bedroom accessory without shame, and 78 percent of men said they would consider buying one. Sexual pleasure is a genderless right, and the persisting macho stereotype that suggests "real" men don't need any assistance to amp up their sex lives has got to go.

Contrary to the idea that people who use sex toys solo will become so enrapt in masturbatory ecstasy that they forget about partnered sex altogether, a little mechanical support can actually bring couples closer. There are a staggering number of couple's sex toys on the market to choose from, and if you're worried about your guy getting jealous of yours, Herbenick's abovementioned research also found that men are way less intimidated by their female partners using sex toys than is usually reported. Seventy percent of men disagreed or strongly disagreed with the idea that they would be threatened by a vibrator. In turn, ladies shouldn't be threatened by a guy who likes (or needs) a little help either.

3. Sex Toys Can Make You Better In Bed

You don't need a study to know that women who learn to get themselves off (often with a sex toy) have a way easier time climaxing with a partner. (But just in case you do need a study, here's one from Psychology Today.) The same thing goes for men, but in a slightly different way. The Fleshlight Stamina Training Unit, for example, helps guys prolong their erections, which can only make for a more pleasurable experience in bed.

4. Taking Charge Of Your Sexual Pleasure Is Empowering

Any female sexual explorer who has discovered her own G-spot with a sex toy knows that taking charge of your individual sexual gratification is almost as enjoyable as the climax that punctuates your pleasure quest. Sometimes it takes a tool or two to achieve the sensations you desire, so choosing the aid you prefer is always a vote for yourself. Since self-esteem and autonomy have been proven to play a large role in sexual health and wellbeing, guys are only doing themselves a disservice by shying away from the tools at their disposal. So go forth and purchase your toys, gentleman, we won't judge you!

More like this
How To Do The Intimacy-Boosting Lotus Sex Position
By Laken Howard and Lexi Inks
52 Smart Things On Amazon You'll End Up Using At Least 3 Times A Day
By Lisa Fogarty
15 Genius Storage Solutions For Your Next Bathroom Refresh
By Emma Garza
Here’s Your Daily Horoscope For August 8, 2022
By Mecca Woods
Get Even More From Bustle — Sign Up For The Newsletter