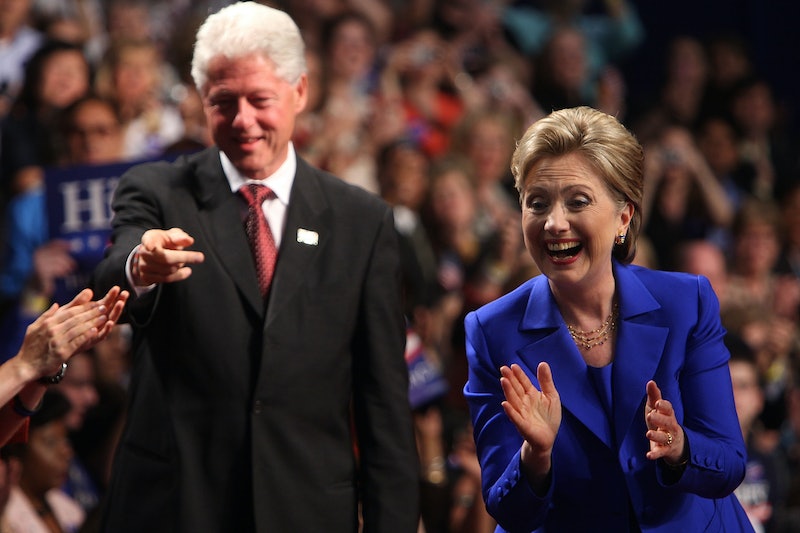 The old cliché that behind every great man is a great woman holds up with the Clintons. In recent years, however, the former president has had to switch his role to being the great man behind this remarkable woman. In a segment set to air Sunday, Bill Clinton opened up in an interview on CNN's "State of the Union." According to CNN, he shares details about his very private marriage and how much trust he puts in his wife, Hillary Clinton.

This marriage has been under extreme examination since the 1990s. The country criticized both Bill and Hillary, made wild allegations, and turned politics into tabloid news. The support and trust that they have lent each other through the years often goes unnoticed.

Hillary wrote in her memoir, Living History, that staying married to Bill was one of the hardest decisions she's ever had to make, according to CNN. In their famous joint 60 Minutes interview, Hillary also said:

You know, I’m not sitting here like some little woman standing by my man, like Tammy Wynette. I’m sitting here because I love him, and I respect him, and I honor what he’s been through and what we’ve been through together. And you know, if that’s not enough for people, then heck, don’t vote for him.

Bill seems to appreciate the support she has given him. He even once told her to break things off with him in order to focus on her own political aspirations, according to CNN. Now, he's behind her as she seeks the 2016 presidency. Here are eight Bill Clinton quotes on how his wife served as his inspiration:

Whenever I had trouble, she was a rock in our family.

In the "State of the Union" interview, Bill was quick to praise Hillary as a crucial figure in their household. She remained strong when the family faced financial struggles.

2. On Making Him A Better Man

Now you know, Hillary is on a constant self-improvement project. You know, she’s always trying to improve me, so I’m having to get used to being improved more regularly. She’s just on me all the time to sort of tone up my exercise program or do this or do that…. But we … have so much fun. We still have a lot of fun together.

During an interview with CBS This Morning, Bill spoke on how Hillary has inspired him in more than just his political aims.

3. On His Election Loss

Hillary was especially good to me in that awful period, balancing love and sympathy with an uncanny knack for keeping me focused on the present and the future.

Bill wrote this in his memoir, My Life, about when he lost his race for reelection as Arkansas governor. He said that her support and the fact that his young daughter didn't realize anything bad happened helped him realize that this was not the end of the world.

4. On His Professional Downs

I was the youngest former governor in American history in 1980 on election night. I got killed in the Reagan landslide. People I had appointed to office would walk across the street, they were so afraid of the new regime in Arkansas, and would not shake hands with me. My career prospects were not particularly bright. ... And she never blinked. She just said, "Hey. It'll turn around. I believe in you. You've got this."

As a presidential candidate, Hillary is sure to face criticism and some hard moments of her own. As Bill told CNN, she was his support system. Hopefully, the former president is up for the challenge of being hers.

I believe I’m a better authority than anybody else in America on my own wife. I have never known a person with a stronger sense of right and wrong in my life — ever.

Hillary was an inspiration to Bill for her morality as well. He made this statement to The New York Times in 1994. Bill has been relatively quiet about Hillary's campaign, but hopefully, he'll open up more about this support.

In college, Bill and Hillary started talking about what they would do after graduation. Hillary told Bill that she wanted to clerk in California. He had plans to work on George McGovern's presidential campaign but then announced that he would like to go to California with her. She asked him, "Why do you want to give up the opportunity to do something you love to follow me to California?" He replied:

For someone I love, that's why.

This exchange, recounted in Living History, shows how Hillary influenced Bill in a different kind of way. She inspired him to make his own professional sacrifices for a loved one.

Whether I'm a good man is, of course, for God to judge. I know that I am not as good as my strongest supporters believe or as I hope to become, nor as bad as my harshest critics assert. I have been graced beyond measure by my family life with Hillary and Chelsea. Like all families' lives, ours is not perfect, but it has been wonderful. Its flaws, as all the world knows, are mostly mine, and its continuing promise is grounded by their love.

Although Bill is fairly private concerning his family life, he wrote this in his memoir. Hillary and Chelsea have influenced him to see his mistakes and be grateful.

I trust her with my life, and have on more than one occasion.

Bill made this statement to CNN but also delved into the self-doubt he faced in his 20s. Hillary supported him and guided him through career setbacks. She's been an inspiration to him in uncountable ways.