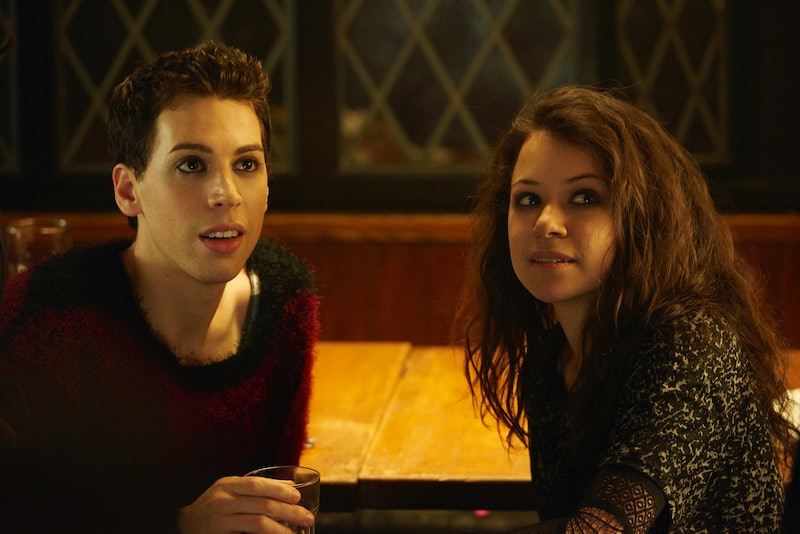 "In Londontown, we all fell down, and Castor woke from slumber. To find the first, the beast, the curse, the original has a number." That's the first line of the decoded Orphan Black rhyme, and it means everything and nothing at the same time. London? Castor? Asleep? It actually does point Sarah in the direction of the Castor original, but there's still more to Duncan's code that hasn't been cracked yet. What other secrets are lying in the pages of The Island of Dr. Moreau book, and has Sarah accidentally walked right into a Castor trap?

Backing up a second, Rachel claimed to know the secret code in the Moreau book. She proved herself to everyone by decoding the first page of the book, which is that rhyme listed above. There was also a number attached to it, too, which lead Sarah right to the Castor original (which, it turns out, is Mrs. S's mom, but that's a whole different Orphan Black mind-boggling can of worms).

Mrs. S's mother is the original, sure. At least, she claims to be that. Mrs. S seems to buy it. Sarah seems to buy it. I'm not so sure if I buy it, though. Have you seen inside that Moreau book? There are a lot of pages with a lot of codes on them. All Rachel did was decode the first before Dr. Nealon so conveniently showed up and took her away. Her getaway and then "capture" was staged. She could have easily "accidentally" decoded the book, sending Sarah in the wrong direction.

And still, there are so many more pages of that Moreau book. How do we know the next page doesn't say, "This is a trap." We don't know that! Sarah doesn't know that! Rachel never decoded it so the following pages could literally say anything. They could say that the Castor original will only show itself on the second full moon of every other month. The next page of the book could explicitly explain that neither Castor nor Leda can live while the other survives. They could say anything, and Sarah jumps the gun, and heads right for London.

It's all way too easy. Orphan Black LOVES its twists. Sure, heading off to London brought twists on twists in twists, but it started off so simple. London is also, like, really big you guys, and the Castor original was discovered really fast. To me, it feels like a set up. It feels like Rachel — wherever she is — is still pulling strings, and had this whole thing organized. She might have decoded the first page, yes, but she also could have led everyone right into Castor's clutches. Ferdinand is even back this episode — remember super creepy Ferdinand? His appearance can only mean one thing: there's more trouble coming.

Something's up. This is only the beginning of the code, and the start of whatever Sarah just woke up. You should know better than to wake a sleeping clone.