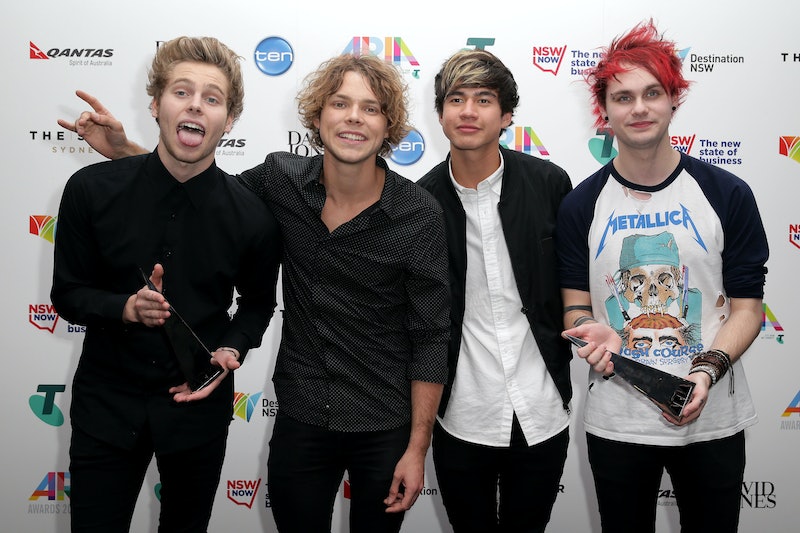 Usually concerts are filled with plenty of special effects. Whether lights, fireworks, or cameos from Olivia Benson, it's all part of the performance. However, things took a very different turn during a recent 5 Seconds of Summer show at the Wembley Arena in London. On Saturday, 5SOS guitarist and singer Michael Clifford's hair caught on fire and he had to run offstage to put out the flames. According to Us Weekly, Clifford was playing his guitar close to a device that shoots out fire, and well, you know what happened next. While all of that sounds extremely terrifying, the good news is that he's doing OK.

After the show, Clifford sent a series of tweets to his fans, including an apology for not finishing the encore — as if that was everyone's biggest concern. He also tried to lighten the mood by saying he looked like Two-Face, aka the villain from Batman. Along with a photo of himself all bandaged up, Clifford wrote,

Despite the injury, it's not stopping the musician from taking the London stage for a third time on Sunday. Clearly Clifford is quite a trooper and I'm sure his fans appreciate that dedication.

In case you're unfamiliar, 5SOS is an Australian band, who's often compared to One Direction. Even though they've toured together, these guys are actually pretty different. Trust me! I once made the mistake of calling 5SOS a "boy band" in an article, only to receive an angry tweet from one of their fans saying that because they play their own instruments, it's not the same. (Who knew?!) To avoid upsetting anybody, feel free to consult Bustle editor Kadeen Griffiths's Venn diagram explaining the distinctions between 1D and 5SOS! It should clear things up.

Now that you're up to speed, let's take a look at Clifford's tweets after the accident. And most importantly, the photographic evidence that he's alright!

His bandmates even tweeted about the incident, showing their support:

So glad Clifford is doing OK and wishing him a speedy recovery! But please, stand very far away from the pyrotechnics machine from now on. Seriously, that was way too close of a call.