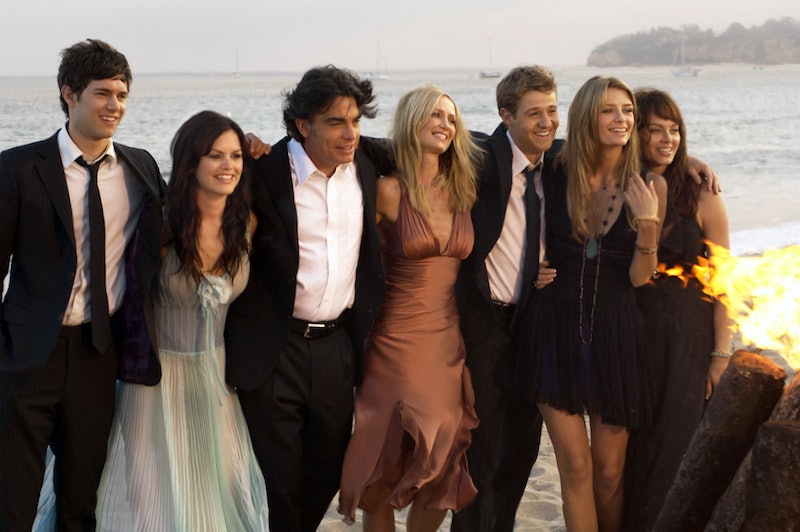 Newport, Calif. lives to party. Or at least, that's what I learned from watching The O.C. When Chino-native and amateur car-jacker Ryan Atwood is taken in by the well-to-do Cohen family, he quickly learns quickly that there's nothing their rich neighbors love more than getting dressed up to drink heavily and raise money for causes whose names they can't even remember. On The O.C. , parties were basically everything. What a life, what a town.

But The O.C. bashes don't usually end with cocktail conversation and the valet calmly bringing the Benz around. More often than not, they spiral into boozy brawls, public humiliation, and the occasional wardrobe malfunction.

So how do you know that an O.C. party is about to spiral out of control? There are clear signs, though they're almost universally ignored by every character, bless their hearts. In spite of Newport residents' complete failure to retain their chill at any public event, they could never stopped planning them, and I wouldn't have it any other way. What would the teen drama be without its...well, drama? Not The O.C. I still love, that's for sure.

Here are the seven warning signs that an O.C. party is going to be a night no one will ever forget.

1. Someone Has A Secret That Absolutely Can't Get Out

Ryan is the Cohens' "cousin from Boston." Julie Cooper is dating Kirsten's dad. Marissa is romancing her gardener. People who don't want their business dragged all over Newport's catty book club scene should just fake a fever and stay home. Their secrets are always exposed, and in as public and embarrassing a way as possible.

2. Someone Is Struggling With Substances

This one should be pretty obvious, but apparently not. Vodka practically flows through the hilly, mansion-lined streets of Newport. And the adults can barely stand to speak to their "friends" without a two-drink head start. This sets the stage nicely for drunken fights and crying jags.

3. Someone Is Stuck In A Love Triangle

It will resolve itself, yes. But it will do so messily, and in front of everyone you've known since kindergarten.

4. Someone's Step-Grandfather's Young Girlfriend Is There

If you don't see where this is going, go to the eye doctor and double-check your prescription.

5. Someone Is The Target Of The Entire Water Polo Team

The only thing worse than angry bullies are drunk, angry bullies. Take a day off, Seth. Your Playstation lacks the ability to punch you in the face.

A night out with Julie guarantees a morning full of regrets. It might be worth it though.

7. Someone Has Her Whole Life Ahead Of Her

I'm sorry, OK? But I can't ignore the worst party hangover in all of O.C. history: Marissa's post-graduation accident. Things were going way too smoothly for our sensitive heroine as high school came to an end. Couple that hopefulness with an exuberant group montage and you've got a case of certain doom. RIP.

I'll give Newport this: an O.C. party can be a lot of things, but it will never, ever be boring.