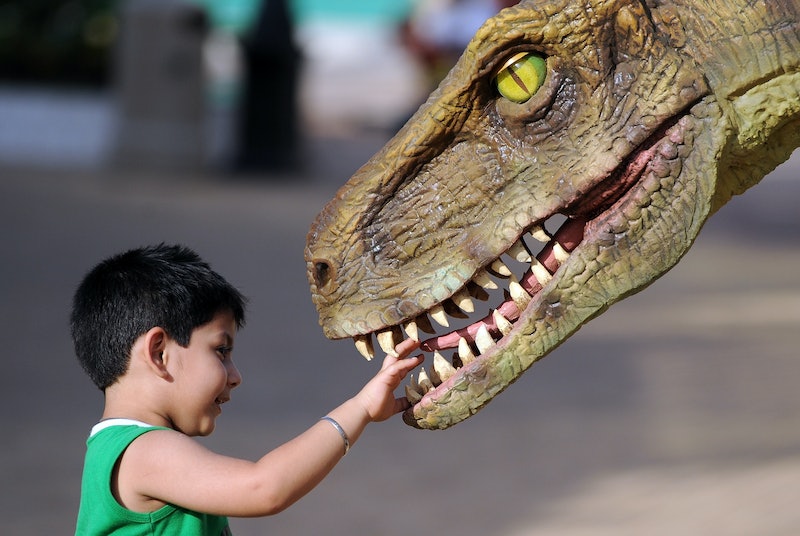 We're all pretty familiar with household pets like dogs, rabbits, hamsters, and turtles; we occasionally even entertain the idea of slightly more unusual pets like snakes, chickens, sugar gliders, and even goats. But have you ever thought about what it would be like to have a Velociraptor as a pet? Probably not because, you know, they've been extinct for approximately 65 million years now, but YouTube channel We Have a Dinosaur makes you break free from the confines of time, reality, and possibility to imagine what life would be like with a dinosaur pet. And guess what? As it turns out, it might not be that different from having a cat.

The channel only has one video so far; entitled "Breakfast," it's a high-quality, well-shot, one minute interaction between a man and his pet dinosaur at breakfast. The video starts with the man, groggy and ready for his morning bowl of Chex, minding his own business in the kitchen when out of nowhere appears his pet dinosaur. Now there are two mouths and only one bowl of cereal. Who will win? If you have a pet, you've probably experienced the stare-down that occurs between you and the pet when food is introduced into the relationship. As per the video, it goes a little something like this.

3. And the peace and quiet ends.

If this isn't enough to convince you that small dinosaurs would most likely be like other household pets, let's take a look at some other examples to solidify the extremely reasonable argument presented in this film.

It would probably play with its babies.

It would try to be fierce but just end up looking really cute.

It would definitely be a diva.

It would be simultaneously fascinated by and cautious of its own kind.

It would have its bad moments and good moments.

You would love it no matter what.

Check out the full video here so you, too, can visually experience what it might be like to have a dinosaur