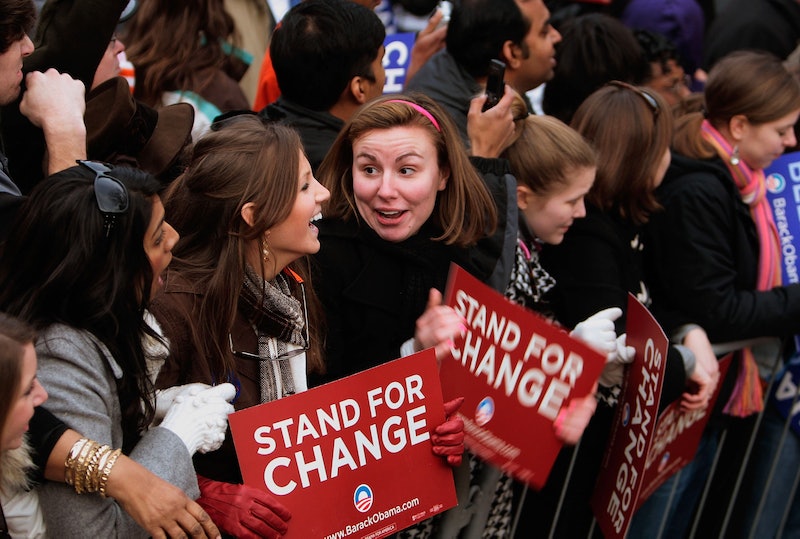 Whether it's reading about recent demonstrations in Egypt or Greenpeace's continued work on behalf of the Arctic 30, most of us know that activism is alive and well around the world. But sometimes, some of the more interesting protests out there don't get much media coverage. Did you know that this weekend alone, for example, over a hundred Colombians wore miniskirts to protest sexual assault? How about the thousands who marched for the environment in Naples? Here are five protests that went on this past weekend that you need to know about:

This weekend, between 100 and 200 men and women showed up in Bogota, Colombia wearing mini-skirts in order to protest against sexual violence. The demonstration was spurred thanks to restaurant owner Andres Jaramillo, who suggested last week that one of his clients deserved to be raped because she was wearing a miniskirt.

Although Jaramillo apologized relatively quickly, the remark drew justified rage, and women's rights groups soon took to social media to gather supporters, with the hashtag "#Yomepongounaminifaldayque" ("I wear a miniskirt - so what?") trending on Twitter. Those same supporters showed up outside the Bogota restaurant on Sunday, wearing mini-skirts and shouting: "Miniskirts are not an invitation!" and "When we say no, it's no!"

Colombia wasn't the only place to protest sexual violence over the weekend. Thousands of people took to the streets in New Zealand to protest rape culture, particularly targeting the country's response to a horrific group of teenagers calling themselves the "Roast Busters."

The Roast Busters — who were exposed thanks to an investigation a few weeks ago — allegedly pick out teen girls to inebriate to near-unconsciousness, gang-rape them on film, and then upload the videos onto Facebook. Although one victim had tried at one point to report the assault, she'd apparently been told she didn't have a case because of what she was wearing. (Starting to see a pattern here?)

“They said that I didn’t have enough evidence to show, because I went out in clothes that was pretty much asking for it,” the victim said.

To protest the police force's abhorrent lack of action, over 100,000 people signed an online petition demanding that New Zealand’s prime minister to “bust the Roast Busters,” and thousands marched on Saturday.

In Italy, demonstrators took to the streets this weekend in order to protest a different type of violation: that of the environment. Thousands of residents marched in Naples on Sunday in order to demonstrate against the local mafia — known as the Camorra — who they say has been dumping tons of radioactive waste, paints, and chemicals into the surrounding countryside over the last 20 years. Thanks to recent tests, local residents now know that the waste leakage has contaminated the water in farm areas around Naples and Caserta, and many of the protestors are saying that their family members were killed by cancer and similar illnesses caused by the pollution.

Saudi Arabia is no stranger to protests: earlier this month, women got behind the wheel to demonstrate against the ban on female driving. But coverage of protests is often focused on the many issues faced by Arab women. This weekend, however, scores of people from Manitoba's Ethiopian community took to the streets and marched to the city's Legislative Building in order to raise awareness of the rampant human rights abuses and poor working conditions faced by Ethiopians in Saudi Arabia. According to the International Labor Organization, Ethiopians often face discrimination, menial pay, and a high degree of physical and mental abuse.

"This is something we have to speak up against and it starts from us stepping out and holding protests such as this to let media know that we have had enough,” said one protestor.“We are standing up for them."

Meanwhile, back in the U.S. of A., people across the country gathered on Saturday to protest against the mainstream media. Protesters targeted the offices of ABC, NBC, CBS, CNN, and FOX News in particular. The march — dubbed the March Against Mainstream Media (MAMM) — called for the media to give readers "the truth," and criticized the conglomerates for their limited coverage of world issues. The protests soon spread to Australia, Canada, and the UK.

“The United States Mainstream Media is the #1 tool used against the American people and we have to get the mass public to turn away from this garbage once and for all and actually start thinking for ourselves,” protestors said.

Last September, a Gallup poll showed that over half of Americans — 60 percent, to be precise — don't trust mainstream media to report the news fairly or even accurately.

More like this
How The City Healed Five Years On From The Manchester Arena Attack
By Ella Glover
Twitter Was Saying The Same Thing About Sam Ryder’s Surprising Eurovision Result
By El Hunt
25 Quotes About Love To Share During Pride Month 2022
By Madeleine Aggeler and Emma Garza
How To See The Lunar Eclipse On May 15-16, 2022
By Kaitlyn Wylde
Get Even More From Bustle — Sign Up For The Newsletter