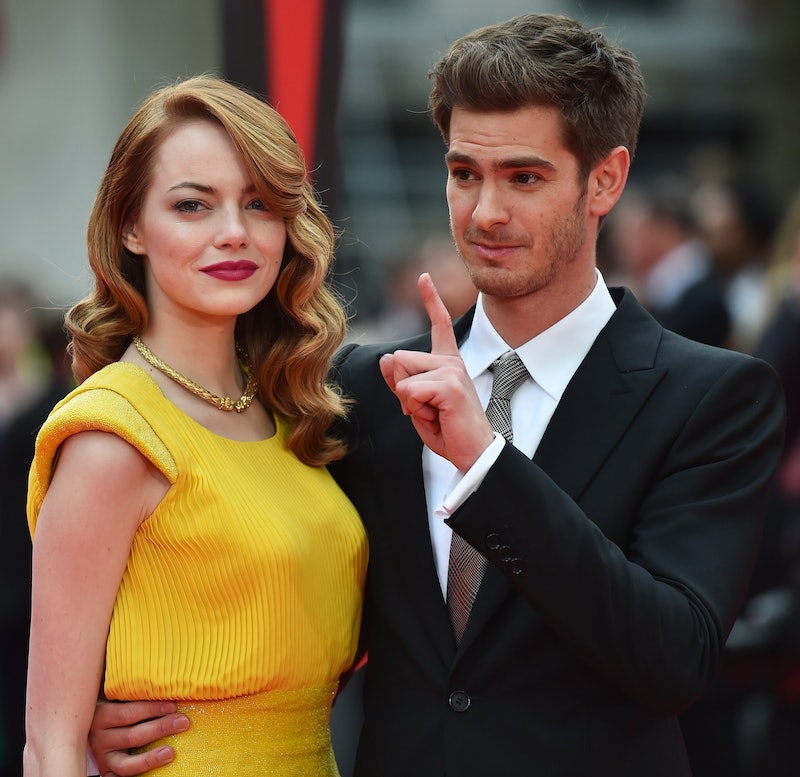 Emma Stone and Andrew Garfield have been one of the most beloved Hollywood couples for a few years now, and fans were heartbroken when the pair seemed to have ended their relationship earlier this year. We all wanted to know how such a perfect love story could go wrong, and they basically solidified the fact that romance is pretty much dead to me, because if they can't make it, who can? (I'm partially joking, don't worry.) But then hope was reignited when it seemed that Stone and Garfield decided to get back together — or at least go grocery shopping together. So what exactly is the status of their relationship? Well, that's really none of our business, and as the actress revealed in a new interview with the Wall Street Journal , she has a good reason for not talking about it.

While Stone understands why the public is so interested in her love life, she knows that sharing even the smallest tidbits of her personal life with the press only leaves her open to more speculation, and it's an endless pattern she'd rather not indulge in at all to avoid the trouble. Of course, people are going to talk no matter what you say, but Stone has learned to let it go. She told WSJ,

See, I never talk about this stuff for this exact reason — because it’s all so speculative and baseless. Once you start responding — once you’re like, "No, that’s not true" — then they’re like, "Well, if we push enough, we’ll get a comment, so let’s see what else we can make up." I understand the interest in it completely, because I’ve had it, too. But it’s so special to me that it never feels good to talk about, so I just continually don’t talk about it."

Celebrities are constantly faced with the difficult task of protecting their private life, while simultaneously knowing that their public persona is important to the longevity of their careers. Stone knows this, and has decided not to take herself too seriously one way or the other by attempting to suppress whatever tabloid stories are printed, even if they're untrue. In fact, she's started to view it as more of a game than anything else:

There’s probably some rebelliousness that comes out in me after all these stories and people texting you for weeks about something that, for the most part, is not true. But even when it’s false, I would rather just let it be false.

That's a pretty good attitude to have, and likely the only one you should have if you want to maintain your sanity in Hollywood. Whether or not Stone and Garfield are together (and my fingers are crossed that they are), we'll just have to respect their privacy.