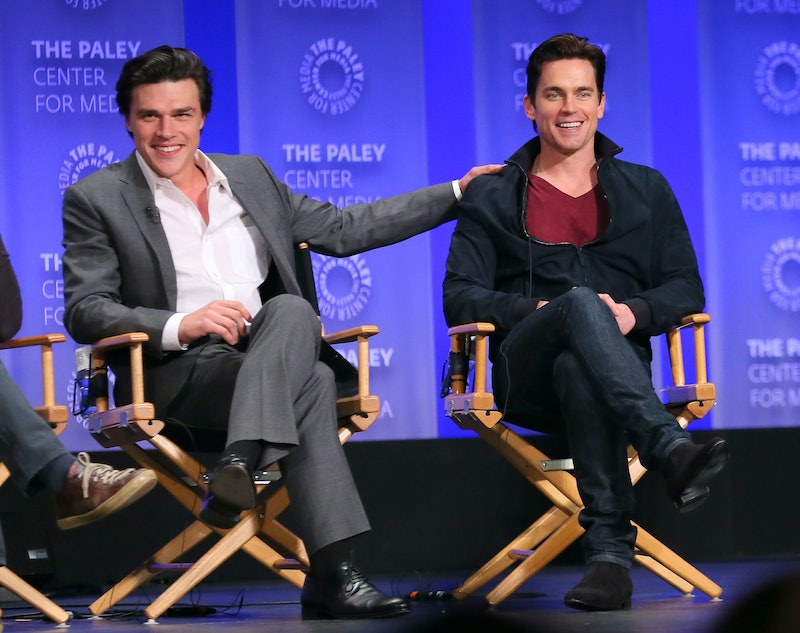 In a tweet posted Wednesday, Ryan Murphy revealed the exciting news that Finn Wittrock has joined American Horror Story: Hotel . Ever since the 30-year-old actor announced that he would be appearing in one of Murphy's three upcoming shows this fall, fans have been eagerly waiting to find out which one he would land on: AHS, American Crime Story, or Scream Queens. Given that Wittrock's spoiled psycho was the breakout character of Season 4's Freak Show, it's appropriate that he's returning to the AHS fold for another go-round. But his casting comes with a terrible decision for American Horror Story: Hotel star Lady Gaga: as Murphy stated in his tweet, "Who will Gaga choose -- Finn or Matt Bomer?"

Talk about a veritable Sophie's choice! How could anyone possibly be expected to pick between two such exceedingly fine specimens? The four previous seasons of American Horror Story have featured plenty of characters faced with impossible decisions, but this one takes the cake.

We still don't know much (if anything) about the plot of AHS Season 5, but with all this talk of hotels and ballrooms and love triangles, it's shaping up to be the show's most romantic iteration yet. (Perhaps Hotel will take some cues from famous gothic romances like Rebecca or Bram Stoker's Dracula.) So who will Gaga go gaga for? Let's examine her options:

Wittrock exploded onto the scene last year as pampered rich kid-turned-serial killer Dandy Mott. That's both a point for and against him. In the "pros" column, he'll already be a fan-favorite presence on the show going into Hotel. On the "cons" side, though, it's probably going to take a while for audiences to separate Wittrock himself from the creepy character he so expertly crafted last season.

If Wittrock has youth on his side, then Bomer has experience. (It's not like the 37-year-old Golden Globe winner is THAT much older than the 30-year-old Wittrock, anyway.) Bomer also made his AHS debut in last season's Freak Show as hustler Andy, who (ironically enough) became one of Dandy Mott's very first victims. It's obviously easier to root for the hustler-with-a-heart-of-gold than it is the sadistic freak who killed him, so perhaps Gaga should choose Bomer. Then again, Andy proved pretty defenseless against Dandy, so perhaps she should reconsider if she hopes to make it out of the Hotel alive.

More like this
How Lady Gaga & Adele Are Closer To The EGOT All Of A Sudden
By Jake Viswanath
Everything To Know About The Musical 'Joker' Sequel – & Lady Gaga’s Role
By El Hunt and Sam Ramsden
Lady Gaga Will Star In 'Joker: Folie À Deux' With Joaquin Phoenix
By Jake Viswanath
'Yellowjackets' Just Announced Who’s Playing Adult Van & It’s Perfect
By Gretchen Smail
Get Even More From Bustle — Sign Up For The Newsletter