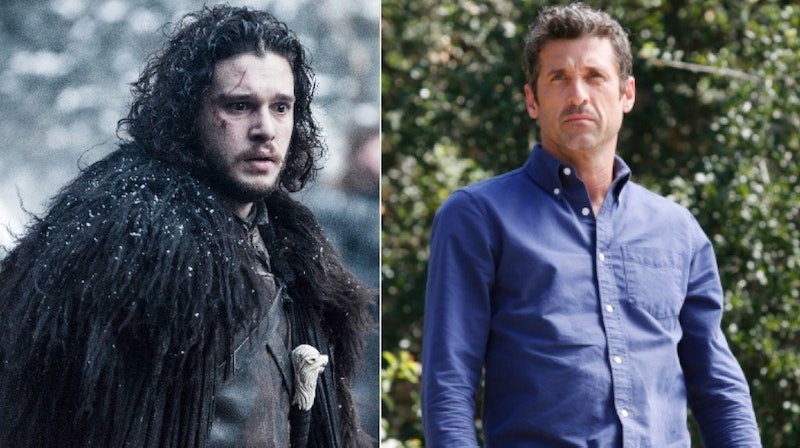 It's not uncommon for TV shows to kill off important and beloved characters throughout any given season. Diehard viewers know this to be true, and for the most part, we accept these occasional sacrifices, convincing ourselves that the writers must know what they're doing. However, there are some TV deaths that are just too unforgivable to truly even comprehend. That are so devastating that you're even contemplating quitting the show entirely. It's a terrible feeling to have, but one that audiences have already experienced twice this year: first with Derek Shepherd's demise on Grey's Anatomy and then again in the wake of Jon Snow's alleged death on Game of Thrones .

Two pivotal characters dying on two pivotal shows. Clearly, the TV gods are using our hearts as an emotional chew toy this year. And while I'm a steadfast believer that Jon Snow will return to us next season in some form or another, that still didn't prevent me from spiraling into a severe case of depression with every stab wound he endured. Then there's Derek, the brain surgeon who became brain dead. Did we really need that kind of irony? McDreamy's death broke us in a big way and I doubt if even the finest doctors could ever hope to mend our wounds. But how does one traumatic event compare to the other? Let's map it out and see just how similar (or different) the two incidents are.

Though we knew their deaths were going to be a possibility, I honestly didn't think the writers would actually go through with either, given just how important their characters have proven to be. That's a big reason why the Jon Snow resurrection theories keep piling up. It's hard to imagine GoT without him.

A Sense Of Closure

In truth, it still felt as though both of these characters had more of a story to tell, but if I had to choose one, I'd say Derek had less unfinished business in regards to his storyline than Jon did. He had a family; he was reconciled with Meredith; his career was in a good place. I mean, don't get me wrong, he was still way, way too young to go. But when you compare it to Jon and the game-changing theories surrounding his parentage, his death (if it really is for keeps) would rob us of those answers. Because even if we did eventually learn that he was a Targaryen, it wouldn't matter as much since he'd already be dead. And where's the fun in that?

The Odds Of Returning

Sadly, there's no question in our minds that Derek is gone for good. Jon Snow on the other hand… well, that's a completely different story.

The Manner Of Their Demise

Ugh, I can't even with this one. In my eyes, neither of these two got the death they deserve. As I mentioned before, Derek becoming brain dead felt like a cruel kind of humor. Not to mention the fact that both of these guys have been through way worse than this and survived. From hospital shootings and plane crashes to run-ins with White Walkers, these characters have persevered. And yet they were taken down by a group of their less talented peers? They deserved much better than that, and come to think of it, so did we.

RIP, McDreamy. You will always be missed. And as for you, Jon Snow — well, hopefully, we'll see you soon.