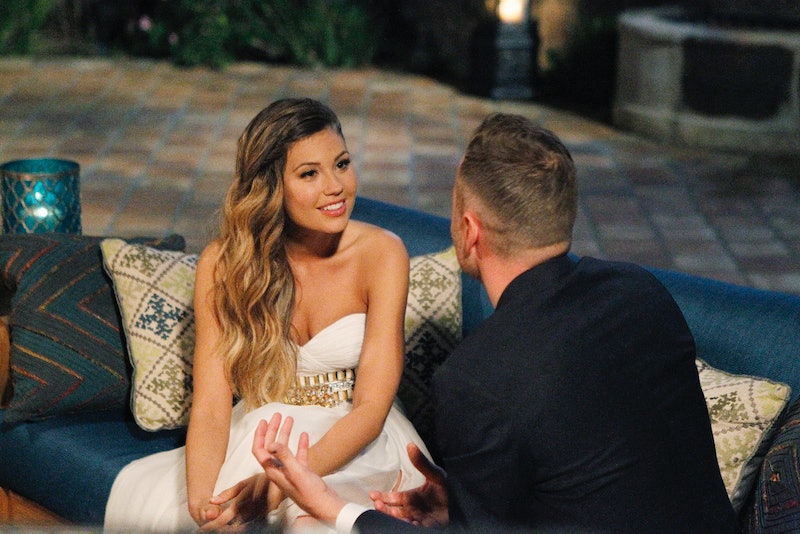 Let’s compare Kaitlyn’s Bachelorette route against Britt’s for a moment. Kaitlyn is trying to decipher which men in the house are there for her and even want to be with her, while Britt found a guy who proved almost immediately how much he wanted to be with her. Thus far, after every dramatic episode of The Bachelorette, they show us just how happy Britt and Brady are together since they started hanging out. To be honest, it kind of seems like Kaitlyn actually got the short end of the stick here because one loyal guy is way better than 24 just OK guys. Especially when there are guys like Ian, who flipped out on Kaitlyn and totally slut-shamed her.

Here’s what we know about Britt and Brady’s passionate romance. We know (at least we think we know) that they are still together. He asked her to be “his girl” after about five minutes. She accepted and then they frolicked on the beach. So, it was kind of like, “Look at all these jerks with Kaitlyn” followed by, “But look at these two lovebirds playing in the water.” I don’t know, but I can’t even date two guys at the same time, so I have to say that Britt has it way better than Kaitlyn, and she should be pretty happy right now that she wasn’t actually chosen as Bachelorette.

To prove my point, I’ve rounded up nine photos to show why Britt not being chosen was actually the best thing that could have happened to her.

1. That Time They Both Wore Beanies

I look like garbage in a beanie, so when two people look that good sporting a beanie, you know it’s meant to be.

Couples who hike together, stay together. No, I’m pretty sure that’s not true at all, but look at them! Their resting b***h faces here are on fleek.

According to Brady, this hair mustache is the reason he started to grow out his mustache. Obvious sarcasm, but I like the effort.

4. That Time They Frolicked On The Beach

Let’s go back to this for a moment. Couples don’t ever just run around on the beach and play wrestle together unless they are in The Notebook. I blame that weird beach love scene on the producers, but they’re smiling, they’re in California, and they aren’t fighting for time to talk to each other at the mansion. Sounds like winning to me.

5. They Went To A Movie At The Hollywood Forever Cemetery

OK, I know this because I am 100 percent obsessed with the Hollywood Cemetery summer screenings and it’s probably the most fun date idea ever. You go drinking and watch a movie with tons of people and snacks. There is nothing better, I’m almost upset I wasn’t there to crash their date.

I am not sure what I am more jealous of: Their relationship or Britt’s hair.

Yes, I was singing Faith Hill as I wrote that headline. We need to talk about how nobody looks that pretty kissing someone that close up. Flawless. Beyoncé would be proud.

8. That Time They Stared Off Into The Sunset

9. The Moment They Met

Twuuuuu Wuvvvvv! (If you haven’t seen Princess Bride, I can’t help you here).

More like this
Everything We Could Expect In Gabby & Rachel’s Season Of The Bachelorette
By Kadin Burnett
Bachelor Nation's Blake Horstmann Is Dating 'Love Is Blind' Star Giannina Gibelli
By Jake Viswanath and Radhika Menon
‘The Bachelorette’s Michelle Young & Nayte Olukoya Explained Their Breakup
By Stephanie Topacio Long
Winter 'Love Island' Will Be Back In 2023, ITV Bosses Confirm
By Maxine Harrison
Get Even More From Bustle — Sign Up For The Newsletter