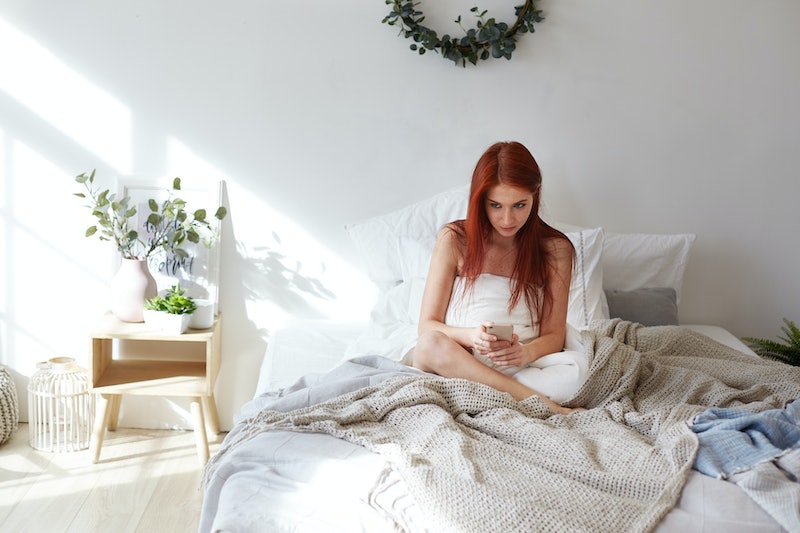 With the invention of the cell phone, all our steamy love letters turned into sexting in an instant. Then along came camera phones, which allowed us to send all sorts of pics that would land us on Santa's Naughty List, and then smart phones that opened up a whole new world of apps like Tinder and Snapchat that were practically made for sending steamy pics and messages just by tapping your screen. Sexting has come a long way since its humble roots, and with so many options out there, it can be difficult to figure out exactly what is and is not an ok sext to send.

There are lots of things you should always avoid while sexting, but there are also plenty of sexts that should just never see the light of day or your unusually bright phone screen. It may seem frustrating trying to follow all the rules of sextiquette, but trust me when I say that all it takes is a bad dirty message to take a great sexual relationship and turn it sour. Paying attention to what is and isn't OK to send to your desired recipient is super important, and you should treat it with just as much care as you would if the other person were standing right in front of you.

The next time you're thinking about sending a sext to the object of your affection, make sure it doesn't fall into any of these categories. If it falls into more than one of them, you're better off starting with suggestive eggplant emojis and working your way up from there.

You know that awkward moment when your partner and your boss are both named Sam, so you accidentally send a work-related text to bae-Sam and a picture of your boobs to boss-Sam and OHDEARGOD what have I done? Maybe I'm just overly anxious, but if I'm dating someone whose name is even remotely similar to another one of my contact's, I change his/her name in my phone to something I could never make a mistake with. I don't care if you have to put your sexting partner's name as "Zxzjzzzz," just make sure there is no way in a million years you could send someone else a sext that wasn't meant for them.

It's cool if you want to continue to bang your ex after you've broken up. It's cool to talk dirty with them. But please don't make the mistake of sending them pictures of your important bits, especially not with your face in them. It's one thing to trust a current S.O. with such valuable images, but considering the number of vengeful exes that are out there, your best bet of not having your nudes plastered all over the internet (until we as a society can convince people that this is a really messed up thing to do) is to keep them far away from people you've had a less-than-pleasant relationship with. And hey, if one of your exes (or anyone, really) sends you a nude, make the world a better place to live by keeping it only for yourself.

You're having a perfectly normal conversation with your latest Tinder match about yesterday's lackluster Chicago Cubs game, when you get the brilliant idea to send her a picture of your testicles. She's all like, "WTF?????" and you have no idea how she can't comprehend the sheer genius of you sending her a picture of your balls completely out of left field while you were having a conversation about baseball and not sex. You might think your promiscuous puns will win over someone who had literally no desire to see your junk in the middle of a conversation about sports, but you'd be wrong. I really can't emphasize it enough: if it is not completely established that the other person would like to gaze upon your gonads, don't send that sext.

You know when you get one of those "Merry Christmas!" texts that you know was also sent to the 50 other people in the sender's contact list? It kind of feels weird, because you know it's the thought that counts, but you also know that there wasn't a whole lot of thought involved in it. The same is true for when you send the same "I wish you were here in bed with me ;)" text to the last five people that have shown romantic interest in you. I'm not saying you shouldn't sext with as many people as your heart and genitals desire — just that you should send those messages separately and maybe with a little bit of personalization for each one. It helps prevent you from sending the wrong reply to the wrong person. And it's also good manners.

I once went out on a couple of dates with a guy, then decided I was feeling pretty "meh" about what was going on, so I ended it. He seemed pretty OK with it, so I assumed we were parting on good terms and that I wouldn't ever have to write about him. But about a month and a half later, I open up a message from him, and BAM. Tit pic. The text beneath them read, "Thanks for ending things. Now I got a new girl with better tits than youres lol." I was more offended by the wrong use of "you're" than the boobs, but the dude's motivation for sending that picture really weirded me out. A reverse image search revealed that he'd taken the actual picture off of Google (which I can't determine is more or less pathetic than sending an actual picture of the person you're hooking up with), but regardless of where you get a dirty picture, don't send it to someone you used to bang. It's gross, it's weird, and you will never come out of that situation a winner.

There's something kind of raunchy about sending your partner a dirty message when you know they're in the middle of an important work meeting. There's something a lot less raunchy about your partner coming home and telling you that they received a very stern talking-to because the accidentally hit the "read aloud" button in the haste of closing the message, enabling the entire conference room to hear everything you were going to do to him when he got home. If you're going to send a sext, don't do it when you know the recipient is in the middle of anything important. Humiliation is pretty much a guaranteed mood-killer.

Science shows that approximately zero people in the past 200 years have tried to send a picture of their new video game and accidentally focused the camera on their naked dick instead, then taken the picture and sent it to the person they just happen to be crushing on. Trust me, it's science. I can believe that someone accidentally sent me a sext that was meant for someone else, but literally no one actually takes you seriously when you try to play it off like you straight-up didn't mean to take a picture of your naked genitals. Unless you're trying to be coy with someone you already have a previously established sextual relationship with, just be honest with it comes to your sexts.

There are some people in relationships who enjoy getting sexual messages from folks they aren't dating. Those people have either already established with their partners that this is ok, or they're assholes. If you know that someone is in a relationship, don't send them dirty texts. Don't send them nudes. Don't do anything that could put their relationship in jeopardy. You might think that your dirty tactics will end their happily-ever-after and that they'll come running to you the moment it's over, but in reality, you're just setting yourself to get blocked and punched in the face.

We've already established that it's a dick (get it?) move to spread someone else's naughty photos all over the internet without their consent. But what about just forwarding it to your pals? What if your man has the most glorious penis ever, and you feel like at least two of your best friends should be able to lay eyes upon it? It's a simple question with a simple answer: no. The only sexts you should be sending are your own. Just follow the golden rule of nudes: treat others' naked pictures the way you want yours to be treated.

A good sexting situation should be as realistic as possible, and that goes for when your partner turns you down, too. If the person you're sexting isn't responding positively to your attempts to seduce them through their phone, and especially if they outright say that they don't want to exchange dirty messages, stop. Do not be That Guy or Girl who tries to steer the conversation back to a sexual subject when your partner clearly wants to talk about literally anything else. It's creepy at the least and sexual harassment at the most.

More like this
Are Gemini & Leo Compatible In A Relationship?
By Kristine Fellizar
TikTok’s Viral “Rating Game” Is Exposing Everyone’s Icks
By Courtney Young
How to Delete (or Pause) Your Hinge Account
By Emma Carey
The 3 Dating Apps Queer Women & Nonbinary Folks Actually Like
By Emma Carey
Get Even More From Bustle — Sign Up For The Newsletter