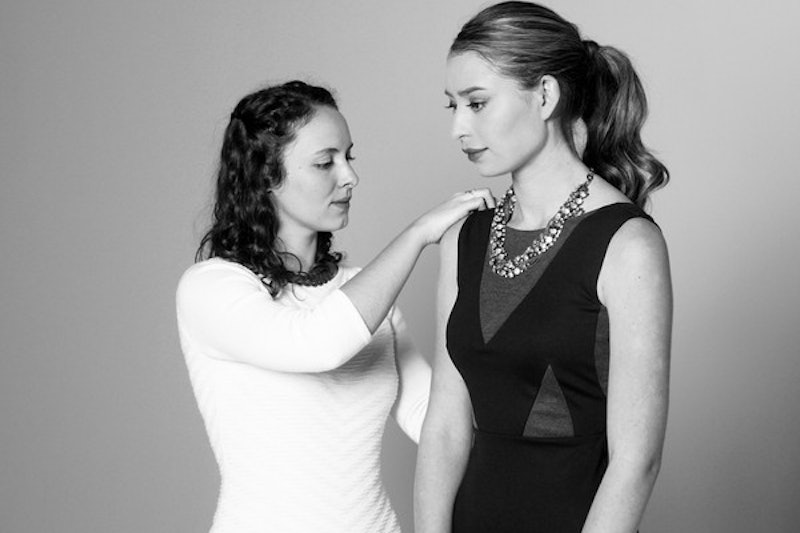 It's one thing to dream of becoming a fashion designer — to design and sew your own pieces at home. But actually figuring out how to start your own clothing line, turning a hobby you love to a profession, seems totally daunting, especially since the market looks like it's saturated with amazing independent designers. But if starting your own clothing line is something you've always dreamed of, you sometimes just have to take the plunge. That's what Colette Chrétien learned when she started her own clothing line La Fille Colette last fall, and from what she explained in an phone interview with Bustle, designing was one of the easier parts of the whole process because she went in with a clear vision.

"I really want to occupy the space of day-to-night dressing and be the go-to for that," Chrétien said. "I was thinking about the balance between these two things: exciting clothes that women really want to wear but also that are easy to wear."

Her line is versatile, comfortable, and colorful, as well as ethically produced in the United States. Chrétien has learned a lot along the way, from the nitty-gritty details of manufacturing to the importance of networking, and as La Fille Colette prepares to launch its first collection this summer, Chrétien took some time to to tell us about the challenges of starting her own line and the importance of building a sustainable brand, as well as give some advice to other designers who have also dreamed of starting their own line.

1. Know what you want to do

Once you decide to pursue this passion, there are two ways to get there. Whether you start your own line or become a full-time designer for another fashion house, "you'll get there whichever way you want to." For Chrétien, the former was going to be the more fulfilling.

2. Do your research about the industry

Creating your own clothing line, "starts out being this overwhelming, very cloudy, mysterious process," said Chrétien. But after doing some research, "you start to realize there's one process to go through." Chrétien asked for advice from a handful of people who have started their own lines, but has learned a lot just by reading what's already out there. "The one book I liked the best and gave a really good overview is The Fashion Designer Survival Guide by Mary Gehlhar." She also liked The Entrepreneur's Guide To Sewn Product Manufacturing by Kathleen Fasanella for a no-nonsense, technical look into manufacturing.

3. And then do more research

Starting a fashion line isn't just about designing every day, and Chrétien spends much of her day figuring out how to run and promote a business. "The typical day is a lot of research and planning," she explained. "Last week, I was trying to teach myself basic HTML and today, I'm going to do a lot of reading on SEO and figure out how I can maximize that." There's no one catch-all skill that will prep someone to head up a brand, so be ready to always be learning. "You really just have to be an entrepreneur first," says Chrétien.

4. Find the right places to help you

Once Chrétien figured out what steps she needed to take, "the hard thing becomes finding the right places to help you," especially when it comes to production.

"Once you start down this rabbit hole, you realize there are a lot of places that do manufacturing," and she visited a lot of duds before stumbling upon her current manufacturer, Cape Cod-based Good Clothing Company, on Facebook. "Sometimes it's really an uphill battle until you find the right fit," but once you do, "That's when you get really lucky and things work out."

Chrétien wasn't planning to make ethical manufacturing or sustainable practices an integral part of La Fille Colette, but as she read more about the manufacturing process she realized, "There wasn't even a choice. For me, to start a fashion company in 2015 and not have sustainability built into its DNA, it would just be irresponsible." La Fille Colette is ethically produced, which means "the workers are getting living wages, fair wages, not working crazy overtime hours without overtime pay," and the fabric is manufactured in New York City, so it only has to travel a few hundred miles to get to the manufacturer in Massachusetts, significantly cutting down on the carbon footprint.

"My focus is to take a step every collection I make, and make it more sustainable every season," said Chrétien. "So next season, I'll be using bamboo, which is a sustainable crop."

"Initially, I thought it was going to be hard to get these dresses produced exactly the way I wanted them to, and then that happened and I had samples I was happy with. The part that surprised me," she admitted, "was the selling." Contacting buyers has required persistence and some pestering, but it's paid off and La Fille Colette will be stocked by several online stores.

Although she plans on hiring someone to focus on this part of the business as soon as she can, Chrétien said, "I'm definitely glad I had the experience because now I know the reality."

7. Connect with your audience

La Fille Colette's dresses are "priced such that it gives people living wages in every part of the supply chain so it's a little more than people are used to paying when they don't know what goes into the product." Another of Chrétien's challenges has been finding the women who value ethical fashion, as well as educating consumers about the slow fashion movement.

"When people buy a dress at a fast fashion retailer for $15, they should think about why it costs $15," she noted. To help identify women who would be interested in her clothes and her brand, Chrétien is using social media to give away one of her dresses. The goal of the contest is to raise brand awareness but also "to find the audience who is the right fit, who cares about my product."

8. Promote yourself and build your brand

Chrétien admitted, "I'd rather not just go up to people and talk about myself, but it's definitely one of the important things. You've got to get yourself out there." At this point, Chrétien is the face of La Fille Colette, and she joked, "My mom is always telling me, 'Keep it two separate entities!' But in reality, when you're out promoting yourself and you're networking, you are your own brand." For Chrétien, since her own collection is an extension of her personal style, "it comes pretty naturally to be 'on brand.'"

"There's just so many different things that tell you there are way too many designers right now and everyone wants to launch their own line and the market is way oversaturated," said Chrétien. But she added, "If you know what you want to do, you've got to ignore it... Just work hard, and I think it'll work out."

More like this
Here Are All 703 Outfits Rachel Wore On Friends
By Kat George
The 10 Biggest Tattoo Trends Of 2023
By Carolyn Steber
4 Chic Outfits To Wear With Loafers, According To A Fashion Editor
By Bella Gerard
Silvio Scaglia Is Wealthier Than 'My Unorthodox Life' Star Julia Haart
By Radhika Menon
Get Even More From Bustle — Sign Up For The Newsletter