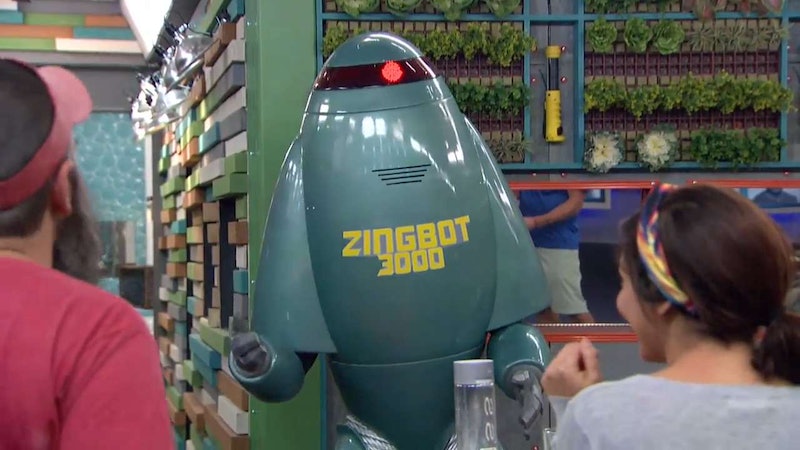 It's summer, but you probably knew that already. As if the fact that school is out, it's late June, and it's a sauna outside didn't give it away. But, let's be real. Knowing that Season 17 of Big Brother is about to get under way is what really tipped you off. Even though a new season of the CBS summer favorite has barely begun, I can't help but wonder when everyone's favorite Big Brother guest Zingbot 3000 will arrive to torment the contestants.

Zingbot is a Big Brother institution. The shade-throwing robot has appeared on the reality competition every season since BB12, and it always delivers some horribly punny insults to the houseguests right before it serves as host of that week's Power of Veto competition. I'm sorry I'm not sorry, but part of the fun of watching Big Brother is playfully poking fun at the houseguests. So, when Zingbot comes in, it says exactly what I've been thinking the whole time about the contestants — but to their faces. Basically, I wish I could be as cool as Zingbot.

So, you see why I'm so jazzed to have Zingbot come back into my life for another season of Big Brother. Thankfully, we know that Zingbot will be back for BB17 . I mean, how could they not? Unfortunately, it's unclear exactly when I will get to hear that grating, high-pitched "ziiiiiiing!" sound again.

The episode in which Zingbot pops up hasn't really been consistent since BB12, although in BB15 and BB16, Zingbot has shown up in Episodes 27 and 25, respectively, so it seems likely that it will show up again around that time for the BB17 houseguests.

However, it is clear that Zingbot often arrives when there's a certain number of houseguests left. Zingbot has shown up on Big Brother when there's between seven and 10 houseguests still around, which is a good range. It's not the very beginning when we don't really know all of the houseguests' idiosyncrasies that are ripe for Zingbot to exaggerate and make fun of, but it's not too close to the end either when there aren't enough houseguests around for a proper reading session. That's usually around Week 8 or 9, so I suspect Zingbot will return around that time on BB17.

And, oh, what a time Zingbot will have with this new batch of houseguests. Though I don't know too much about them other than what's been said in their official show bios — with a wrestler, a dentist looking for a few showmances, and a pro poker player, it's definitely going to be an interesting group. I can only hope the producers vetted BB17 applicants for their zingability.