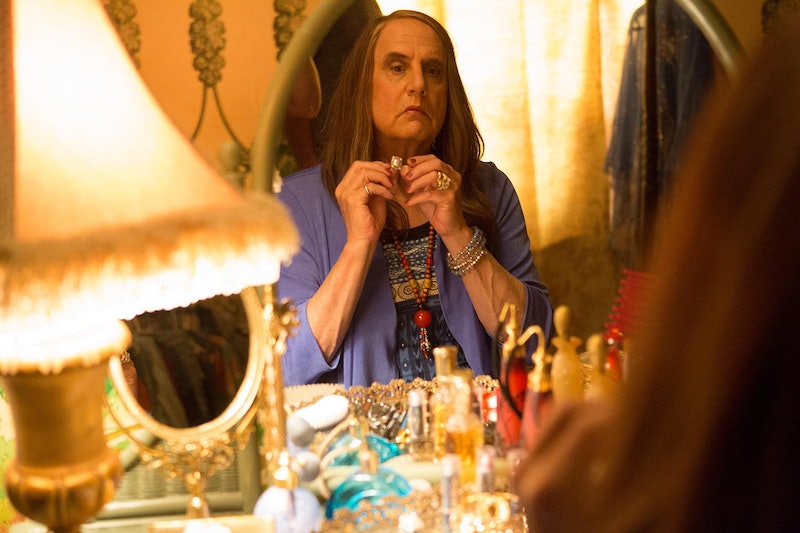 From 1977 to 1984, the American Broadcasting Company treated its dutiful viewers to a weekly presentation of John Ritter affecting gay in an effort to dupe his landlord into granting him room and board. It's a shtick that rings quite regressive to our present society, which, on Wednesday, watched SCOTUS decree marriage equality a national right. If you haven’t seen Three’s Company, the gambit involved more than its share of falsetto speak and wrist dipping. And, sure, you could excuse the sitcom as “a product of its time,” the label we stick to pre-code female characters and racist Looney Tunes shorts. But this treatment of homosexuality as a gag, while not unique to Three’s Company, was hardly the only option for their portrayals of LGBT characters that American pop culture had at the time.

Two years before the premiere of Three’s Company, sociopolitical pioneer Norman Lear launched the sitcom Hot I Baltimore, featuring network television’s first gay characters. Short-lived though the series may have been, Lear tackled the issues of homophobia and, even more impressively for the time, transphobia with aplomb in his long-running and popular programs All in the Family and The Jeffersons. Such begat a long line of sitcoms through the 1980s and ’90s featuring “specials episodes” involving gay characters and, most often, the heterosexual population’s reactions thereto.

After Archie Bunker struggled to wrap his head around the notion of a hypermasculine bar buddy revealing himself to be gay, and George Jefferson wrestled with the idea of an old war pal turning up post-sex reassignment surgery, America saw the like dealt with on other hit series. On, Cheers Sam Malone stood up for his newly out fellow MLB vet against the chides of his peers. On The Simpsons, Homer battled his own discomfort with his gay friend’s potential influence on Bart. And, masterfully, Seinfeld tore up the hypocrisy in Jerry and George’s alleged “politically correct” attitudes by revealing — and ridiculing — their own extant apprehensions about being mistaken for gay.

From there on, the subject was not limited only to “special episodes.” Ellen DeGeneres made her homosexuality a principal focus of her sitcom Ellen, beginning with its Season 4 installment, “The Puppy Episode,” which aired in 1997. The very next year, NBC launched Will & Grace, the first staple of its “must-see TV” lineup to center on gay characters and relationships. Two years later: Queer as Folk, which lent a more devoted vantage point to the LGBTQIA subculture (specifically of Pittsburgh, though representative of a realm nationwide). But, yes, we still dealt with the likes of Friends tossing out its woefully outdated homophobic barbs… a phenomenon we now only remember with a crossed brow.

Last year, Amazon Prime — one in a growing league of original content streaming platforms — launched what became the center of the pop culture conversation, the apex of the critical sphere, and the victor of a Golden Globe for Best Comedy Series and Actor: Transparent, a program about a trans woman’s experiences coming out to her three grown children and ex-wife. The public and industry’s digestion of the project — one that didn’t limit its conversation to standalone episodes, that didn’t rely solely on comedy to tackle its issue, that didn’t buffer its subject matter with an independent premise, and that didn’t tout itself as anything more than a drama about people — said something.

And that something becomes clear on Friday, as we witness the Supreme Court rule same-sex marriage bans unconstitutional in all 50 states. What we’ve seen in the evolution of the way American television treats LGBTQIA characters and issues — from jokes to niche appeal to total normalcy, and everything in between — is evidence that Friday's ruling is not just a testament to the government’s judgment. It is a testament to America’s. To a whole of people who have achieved a long overdue realization.

To say that there aren’t detractors to the cause would be ignorant; hell, there were some on the Supreme Court bench. But now, they’re the niche audience. They’re the unrelenting minority who take issue with the standard of normalcy. The only problem is that they’re not a group who are going to prevail the way the rest of us did. Their time — the time of Jack Tripper’s gay jokes — is over.

More like this
'Heartstopper’s Kit Connor Revealed Why He Doesn't Label His Sexuality
By Nola Ojomu
'Gentleman Jack’s Cast & Crew Are Keen On Season 3, Too
By Frances Stewart
'Heartstopper’s Joe Locke Has A Sweet Message For Queer Fans
By Sam Ramsden
Jennifer Aniston Joked About Ending 'Friends' With Therapy & Divorce
By Grace Wehniainen
Get Even More From Bustle — Sign Up For The Newsletter