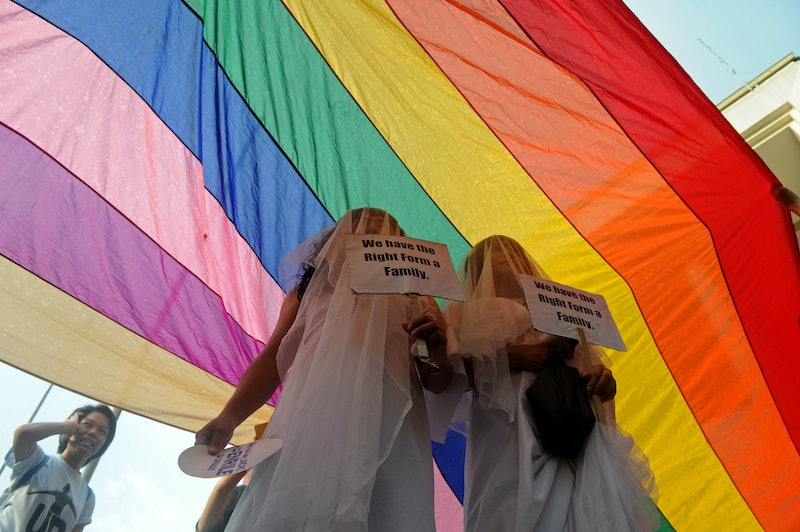 Historic. Monumental. Groundbreaking. Landmark. Whatever word you use to describe the Supreme Court's decision to legalize gay marriage today comes up short, because it is so long overdue. It's been an emotional day for most people, and now that statewide gay marriage bans have been declared unconstitutional and LGBTQ folks can get to tying the knot wherever they please, it's the perfect time to dig into some fun facts about the current climate of LGBTQ weddings, courtesy of The Knot's LGBTQ Wedding Study.

The #1 online wedding resource recently polled 1,200 married and engaged couples about their weddings and wedding plans to "uncover spending habits, trends, and traditions that couples are embracing or adapting to bring their wedding vision to life." They got into the nitty-gritty of everything from who walked down the aisle and who had a surprise engagement to what venues were most popular. According to Anja Winikka, site director of The Knot, the "study shows that LGBTQ couples are hosting intimate weddings, with a focus on the guest experience and lots of personalized details." I hope this trend continues for the hetero folks too, because why have a wedding in the first place unless it realistically reflects you and your partner? In the spirit of celebrating one big step on the road to equality, here are seven facts about the state of LGBTQ unions in the U.S.:

1. It's A Marriage, Not A Same-Sex Marriage

This one seems obvious, but is nonetheless important to note. Ninety-six percent of couples surveyed said they consider their union a marriage, so don't get it twisted. Thankfully, there will be far fewer people debating this idea now that gay marriage is just marriage in the eyes of the law.

2. Straight Guests Could Use A Little Etiquette Help

Straight people need some guidance on how to act with basic human courtesy? What a shocker! Although the etiquette for a wedding is the same no matter who's getting hitched, 60 percent of those surveyed said they wished there were some hints for guests on how to behave.

Women still come out on top of the jewelry game regardless of who they are marrying, with 76 percent of women exchanging rings during their engagement, and only 56 percent of men doing the same. However, 97 percent of couples exchanged wedding bands during their ceremony.

5. Walking Down The Aisle Is Still Pretty Popular

Although the tradition may have originated as a ceremonial exchange of property, 70 percent of couples still walk down the aisle, with women preferring a friend or family member as an escort, and men preferring their partner.

7. Most Couples Believed That Marriage Equality Would Come To Fruition

Of the couples surveyed, 97 percent said they believed the Supreme Court would legalize marriage equality, and 100 percent are now enjoying that basic human right.