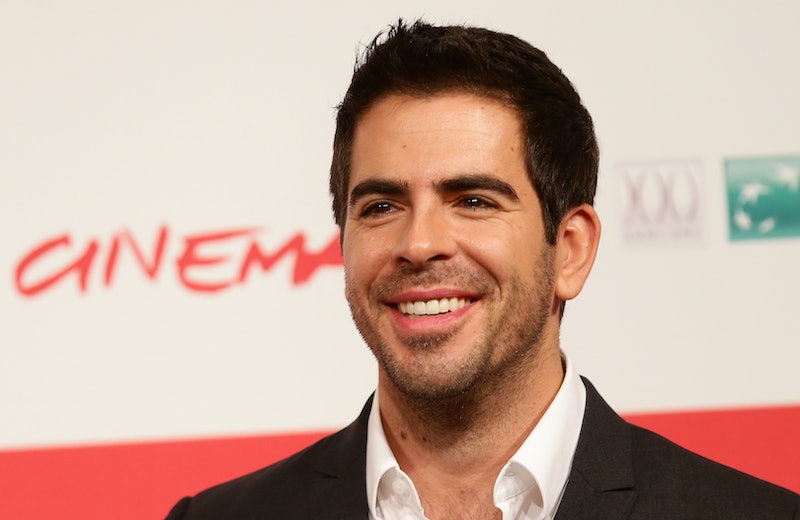 The week-long show will feature Roth with celebrity guests and shark experts discussing sharks with a combination of science and fun. Roth told Yahoo that, "We really wanted to get back to a more scientific approach. I wanted to bring in my sense of fun and what I know from making scary movies, and really be on the side of the sharks — use it as a platform and, in a very fun way, educate people that sharks really are the doctors of the ocean." He'll highlight moments for Shark Week, as well as give people a glimpse of what to expect for the following shark-filled day. And he even managed to swim with, pet, and kiss (kiss!) a shark for the show, too.

Roth promised a "sharktacular" week in the below promo video for Shark Week, but let's see how his previous work has prepared him for Discovery's biggest week.

In the director's seat, Roth contributed to the return of Keanu Reeves with the 2015 horror film Knock, Knock .

Roth turned to Netflix for his supernatural show Hemlock Grove. He doesn't act in the series, and it didn't receive great reviews, but the show has been renewed for a third and final season.

The cult horror film Piranha 3D was right up Roth's alley when he acted in it. So, it makes sense that, for Shark Week, he's turning to another man-eating water beast.

His most notable acting role was in Quentin Tarantino's Inglourious Basterds as the baseball-bat wielding Sgt. Donny Donowitz (a.k.a the Bear Jew). While not aquatically-based, he saw his fair share of gore in the film.

Roth was one of the many directors for the double feature Grindhouse (he directed the fake trailer segment "Thanksgiving"). He was also Dov in the film Death Proof, which was one part of Grindhouse and directed by his buddy Tarantino.

Roth directed and wrote the 2005 film Hostel (he also played the part of the American Stoner) and its 2007 sequel Hostel: Part II. But, he didn't round out the trilogy since he didn't work on Hostel: Part III. Still, making hostels scary two times is enough to haunt me forever.

For the 2002 black comedy horror film Cabin Fever, Roth was the director and writer, and also portrayed Justin and Grim. He had nothing to do with Cabin Fever 2: Spring Break, but Cabin Fever was Roth's first major film as a director and introduced him as a go-to man for quirky and irreverent horror films. Clearly, Roth is a perfect fit to host a Shark Week show.