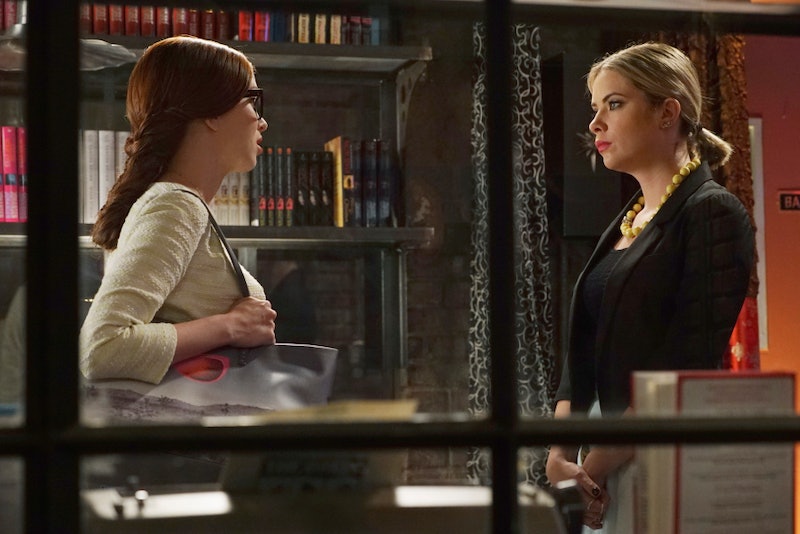 If you happened to catch the promo for this week's episode of Pretty Little Liars, "She's No Angel," you may have noticed that hinted pretty heavily about someone having spent some time at Radley. Many fans believe it could have been referencing Aria, but what if it was someone else? After all, we know that Mona's ever-suspicious friend Lesli Stone is back in Rosewood this week — could Lesli have been in Radley with Charles, and actually be the mysterious ex-patient the girls were speculating about in the promo? And could this finally be the clue that ties her to the A Team?

After all, the events of "Don't Look Now" pointed out that Charles (be he dead or alive) most likely has some sort of ally/accomplice. Since he lived in Radley from the age of six on, chances are, whoever's helping him also spent some time there. So whoever this mysterious former Radley patient from the promo is, they're likely pretty darn integral to the A game.

So could it be Lesli? Sounds like a leap, sure, but it's not like she hasn't proven herself to be untrustworthy in the past. She's always been squirrelly, and the new sneak peeks from "She's No Angel" prove that she's not above throwing around some pretty menacing threats (yeah, she is not happy with Mona for implicating her in her fake death). Plus, she's one of (many) unanswered questions on the show... if you add all of that together, it creates quite the villainous vibe. But does it mean she spent time at Radley? And perhaps more importantly, does it link her to Charles? Check out the preview below.

Now let's review what we know about Lesli and what it could tell us about her past.

There Was All The Mike Weirdness

Aria's formerly super-suspicious younger brother has all but disappeared from Rosewood (thanks in part, to a new gig on Teen Wolf ), but remember how at odds he and Lesli were? He flipped out when he caught her "borrowing" Mona's book (which we later found out housed some key clues re: Bethany Young). This whole exchange was weird on a couple of levels. We (along with Hanna) didn't find out just how important the book was until later in the episode, but was Lesli clued in to its significance? Was she trying to steal the tape?

Hey, take that logic one step further, and you've got yourself yet another potential Bethany Young-in-disguise candidate.

We Still Don't Know How She & Mona Became Friends

Their friendship has always been suspicious. Lesli wasn't at Mona's funeral, and she has always been conspicuously vague about how the two of them met... basically nothing Lesli has ever said with regards to her friendship with Mona has ever seemed like the truth. Could she be lying to cover up a secret past in Radley? It could be where they first became friends — after all Mona was in there for a fairly lengthy stretch.

Lesli & Mona Could Still Be Working Together

Oliver Goldstick warned Entertainment Tonight that Mona could still be involved with the A game — and if she is, there's always the chance that she and Lesli are still allies (no matter how acerbically Lesli treated her in the promo). The rest of their history together might be sketchy, but it doesn't necessarily mean their friendship isn't real, and who knows what fresh hell the two of them could achieve together?

And/Or She Could Be Working With A

The fact that Lesli was pretty instrumental in getting Ali proven guilty (while also testifying against the rest of the Liars — most notably Hanna, who was being framed as Ali's accomplice in Mona's murder at the time) all but screams A. And if she's working with A, we all know what that means — as Spencer said last week, "all roads lead back to Radley."

For more on Radley and the A team, check out Bustle's Pretty Little Liars podcast below.