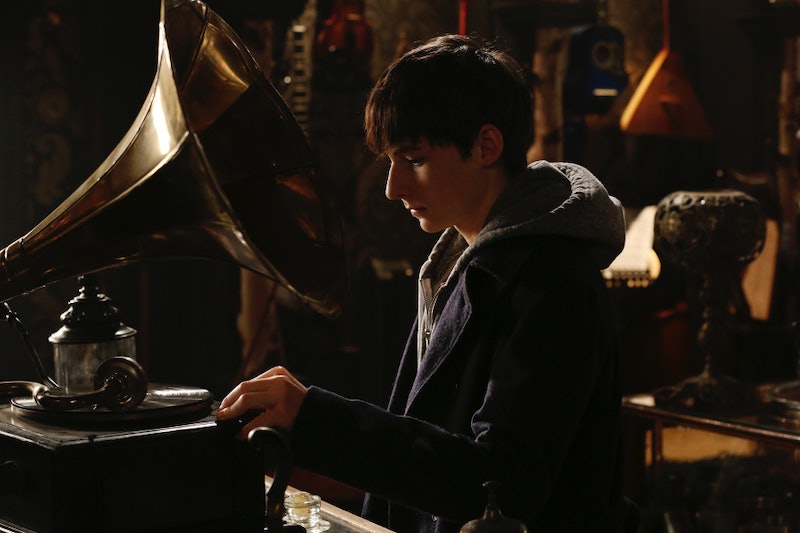 It's been only two months since Once Upon A Time wrapped up Season 4 and I already miss it. I don't even want to share how many times I've rewatched old episodes on Netflix, and caught up on the newer ones through the ABC app. I just really like it, OK? And through all this love, I find myself having lots of complaints about it, too. The big one I've been having lately is all about Henry. Over the last four seasons he's grown up a lot, and now as we start gearing up for Once Upon A Time Season 5 to premiere, I want to see him get to do more.

What exactly am I talking about? Everything. Henry needs to start doing everything. For four seasons he's been this young kid who just happens to get himself into all these magical messes. He saves the day, and then he disappears for four episodes. Now that Jared S. Gilmore is growing up to become a fine young actor, it's time to give Henry something juicy. Henry-centric episodes. Henry subplots. Henry flashbacks! I know there are a lot of people in Storybrooke, but for someone who's been around since the very beginning, he hasn't gotten nearly enough screen-time.

Here are a few suggestions for what Henry should do next week.

1. He Can Really Become The Author

First out of the gate, is Henry really the Author? I have no idea. The last episode of Season 4 showed the magical pen choosing Henry as the next Author, but then Henry broke that pen. So, is that a yes or a no? It should be a yes. All along he's been sidelined by everyone else in an effort to protect him, but now that Henry is inching towards his prime teenage years, he can do stuff too. He can fight off evil. He can fight off darkness. Don't you want an OUAT scenario where Henry is like, "my pen is mightier than your sword!"? I know I do.

2. He Can Bring Neal Back

Sorry, but I am never going to stop my one-woman campaign to get Neal back to Storybrooke. Eventually, someone will feel sorry for me, and bring him back from the dead. Henry casually mentioned bringing Neal back to life during "Operation: Mongoose Pt. 2," and that idea was instantly shot down. Just because it's a bad idea doesn't mean you shouldn't do it, Henry. Considering all the other magical spells performed every 15 minutes in Storybrooke, there's got to be something to bring your dad back. That would make for a great half-season arc.

3. He Can Make Some New Friends

Correct me if I'm wrong, but has Henry ever hung out with someone his own age? I'm not talking about the young Pinocchio. I'm talking about someone in his school — because he's still in school right? Henry should find some new friends that aren't his mom, her boyfriend, or his grandparents.

Speaking of school, does Henry have any hobbies? Beats me. I'd love to see him take up some fun pas-time this season. Soccer's all the rage up and down New England, and seeing as how Storybrooke is situated in Maine, why shouldn't he give it a try? There are enough other kids in school to start up a soccer team, I promise. It will be fun.

5. He Needs A Love Interest

Before Season 4 started, there was rumor that Henry was getting a love interest. According to E!, her name would be Lily. Fast forward through all of Season 4, and we know Lily is definitely NOT Henry's love interest. But it's time to bring this idea back. Everyone else is always going on about "true love" and it's time that Henry got a taste of that himself.

6. He Can Befriend Zelena

I'm still on the fence about the whole "Zelena's pregnant with Robin's baby" thing. I mean, OUAT gets twisty, but this is the most twisted development to date. Seeing as how Regina and Robin are clearly on a smooth 'shipping path, that makes the three of them one little happy family, plus Roland, I guess. Soon, however, they'll be a family of five, since Zelena's baby will basically be the child of Henry's aunt and stepfather. But Zelena will be all alone, and could probably use a friend. She's already family, and could use a familiar face down in her confinement.

Hello, OUAT. Aside from Pongo, the Disney dogs in Storybrooke are widely untapped. Time for Henry to get a dog. I'm partial to Mulan's dog, Little Brother. Oh, what about Dodge from Oliver and Company? Henry will need a canine companion for all of the other adventures I'm hoping we'll see when OUAT returns.